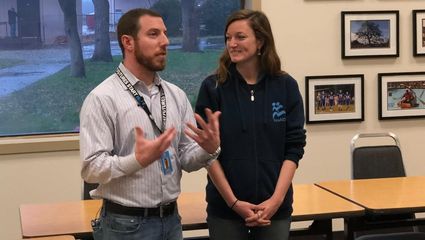 The headlines called it Paradise lost: The northern California town of Paradise, population 27,000, devastated in November 2018 by the so-called Camp Fire, the deadliest and most destructive wildfire in California's recorded history.

In addition to 86 people killed and 15 injured, the raging fire destroyed 18,804 structures over 240 square miles and took 17 days to get under control. Paradise residents lost homes, friends, relatives, pets and treasured possessions.

It takes many professionals to help a community pick up the pieces after such a terrible trauma, and there is no country with more expertise in post-trauma healing than Israel.

That is what brought volunteers from Israeli-based humanitarian aid agency IsraAID to Paradise-the only foreign presence with boots on the scorched earth of the Camp Fire.

In the wake of this fire, almost one year ago, ISRAEL21c came to see the remarkable work being done in Paradise by IsraAID, a nonprofit that responds to emergency crises and engages in international development around the world.

"It was close to home for me," relates southern California resident Amy Friedkin, president of ISRAEL21c, who has a property in Napa damaged by a 2017 wildfire.

"We knew IsraAID works with refugees in Greece and with victims of natural disasters in places like Haiti and Japan and Puerto Rico, but the idea that there would be aid workers coming from an Israeli organization in almost our backyard was just remarkable," Friedkin says.

"At ISRAEL21c, we're all about widening the lens on Israel so that people get a better understanding of the country and its people. We thought this was a perfect opportunity to do that," she adds.

Friedkin spent a day in Paradise along with ISRAEL21c board members Jonathan Baruch and Michael Goldstein, and a 21See film crew. Baruch is executive producer of 21See.

"We were taken on a tour of the town of Paradise-or what's left of it-by a police officer, Sgt. Robert Nichols, who took us to see the remains of his own home," Friedkin relates.

Nichols acquired the home only two years ago and was lovingly restoring it with his own two hands.

"The only things left were his driveway and his garage door, but he said, 'I'm alive and here and if I can help the rest of the community that's what matters.'

Nichols was among the first responders on the scene and had participated in a workshop on trauma that IsraAID presented for police officers.

"The willingness to come out here and be a support... just knowing that we're not alone is huge," Nichols told ISRAEL21c and IsraAID.

"People were amazed that this organization from Israel would be in a tiny little town in California."

Accompanied by IsraAID USA Executive Director Seth Davis and Lauren Proctor, head of the IsraAID mission in Chico, the visitors toured shelters set up by the American Red Cross for Paradise refugees and pets in nearby Chico.

"We saw the helplessness and the feeling of 'where do we begin'-it was so raw for these people, so emotional that even when recounting what happened a month later there was crying," Friedkin says.

Kristy Collins, Hillel director at Chico State University, told IsraAID volunteers they could use her office as a work station. When they arrived, she was about to rush home because 20 women were gathering at her house to talk about how to deal with the trauma.

"Elana from IsraAID said, "'Do you have a facilitator?' and she insisted on coming along to help us," Collins recalled. This was Collins' first introduction to IsraAID.

"The sense of gratitude was so strong," says Friedkin. "People were amazed that this organization from Israel would be in a tiny little town in California."

At a local Boys & Girls Club, the visitors observed IsraAID psychosocial support specialists Esti Avnon and Judith Rybko working with kids whose families were dislocated because of the fire.

These Israelis professionals previously worked on behalf of IsraAID with survivors of disasters in Japan, Singapore, Korea, Nepal, Philippines and Bulgaria.

"People told us that the first week after the fire, 'Everyone was nice but then they go back to their lives and don't have the patience to know how you really feel and to listen to you, and you feel very much alone," Avnon said. "Both children and their counselors at the Boys & Girls Club said they feel lonely sometimes."

Goldstein, an independent television and film producer in Los Angeles, said he was shocked to discover the many layers of trauma the counselors encountered at the club. "They were able to give these children so much hope and help in processing their emotions."

Goldstein recalls one child, encouraged to draw the things he'd lost to the fire, grieving over his collection of video games. "You don't realize all the little things that will never be replaced. The counselors tried to show the kids how to deal with that grief and emotion."

Though he lives in California and has witnessed wildfire damage, Goldstein didn't grasp the magnitude of the devastation until seeing Paradise for himself.

"It was monumental on a scale like nothing I'd ever seen. An entire town will likely never be rebuilt to what it was. That's why it is so important to bring more awareness to the needs of the people there, and how IsraAID was willing to cross a continent to give aid. There are plenty of people in the US who are helping but that people from another country would come because they understand trauma better than others, I found to be incredible."

Davis explains that IsraAID USA was formed three years ago to complement and spread the work of the 17-year-old Israeli humanitarian aid agency.

"It's important for us to have Americans go hand in hand with Israeli professional colleagues around the world to save lives, bridge people and rebuild communities," he said, noting that IsraAID has worked in 19 countries on a FILO (first in, last out) basis. 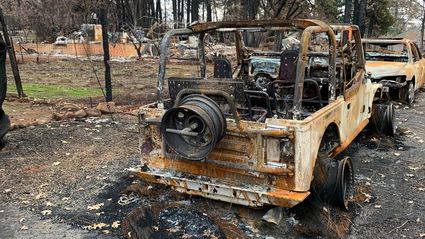 In Paradise, he has observed high levels of trauma among everyone from police to educators to children.

"Our psychosocial support specialists from Israel are helping them release that tension. We're here to help them bounce back and become stronger and more resilient," said Davis.

"Many of the people in the places we work have never seen an Israeli before and they are so thankful. I feel much reward in seeing people feel better about themselves and appreciating Israel as a positive place."

Yotam Polizer, co-CEO of IsraAID, tells ISRAEL21c that the organization recently led another round of workshops and trainings for hospital workers, teachers and community leaders in Butte County, and will continue activities in Paradise as long as the community needs them.