A Holocaust survivor who inspires all he meets

"I am not what happened to me, I am what I chose to be." This is Holocaust survivor Sami Steigmann's own words by which he lives. With an everlasting smile on his face, Steigmann shares his message of hope and positivity with everyone he meets.

Steigmann was visiting friends Staci and Dan Layish in Orlando and had the opportunity to speak with the Knights of Israel at UCF and the fourth and fifth graders at the Jewish Academy of Orlando. Along the way, this reporter was fortunate to have lunch with him and his escort for the day, Debra Corso. For more than two hours he engaged us in delightful conversation. So much so that it's hard to believe he and his family endured the Holocaust.

"I will always be a survivor, but I never felt like a victim," he states.

Steigmann was 18 months old when his parents and he were taken to the Mogilev-Podolsky labor camp in the Ukraine. They were fortunate not live in Germany. Had they gone to a German camp, he and his mother would surely have been sent to the gas chamber. However, Steigmann was subject to Nazi medical experimentation. He has no recollection of the experiments, but his body still has pain from the side effects. After the camp was liberated by the Red Army, Steigmann's family faced starvation. A German woman saved them, risking her life by bringing food and milk to them.

"I've been in pain all my life and I will die in pain," he acknowledged. He told the UCF students that talking to them "is like therapy because the pain is in the back of my mind."

In 1961 his family migrated to Israel. In 1968 Steigmann moved to Milwaukee, Wisconsin, then returned to Israel in 1983. He returned to the U.S., settling in New York City in 1988. Since then he has been a motivational speaker, inspiring people all over the country with his words of wisdom.

Meeting such a seemingly "carefree" man, one would think he has experienced prosperity throughout his life. Not the case. He was homeless for a time, and took the opportunity to volunteer for different charities. Perhaps realizing there are others less fortunate than he.

His message is "Never give up. Never lose hope and enjoy the life you've been given," and he shares this with everyone.

"I'm happy," he told Corso and this reporter. "I live within my means."

Steigmann's words of wisdom are endless-and he lives by all he says.

"The past belongs to the past-move forward. Don't regret anything," he stated with a wisened smile.

He believes leaders should set an example and they are failing miserably.

"They've forgotten how to disagree amicably and they don't take responsibility for their actions."

Steigmann also encourages young people to like themselves. "Look in the mirror and be proud of what you did that day. Be proud of yourself. Write something positive and something negative that happened each day. You have the right to feel the way you do."

Amanda Dinkin, Knights for Israel outreach coordinator, saw how effective Steigmann was with the students. 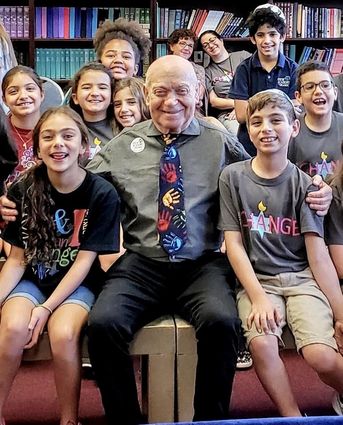 "It's just as impactful to see how he can move on from a horrendous issue," she told Isabella Marchetta, a reporter for the Nicholson School of Communication. "He is able to forgive and move forward and if he can do it from the Holocaust, then I can do it from minor inconveniences in my life."

Steigmann shared a similar message with the Jewish Academy fourth and fifth graders. When asked what he was going to speak about with the students, he replied "I don't know yet, whatever comes to me."

The fourth and fifth graders were encouraged to advocate for their beliefs (see the JAO article on page 2A), and after hearing him, they saw how the human spirit can overcome atrocities and choose to live life to the fullest.