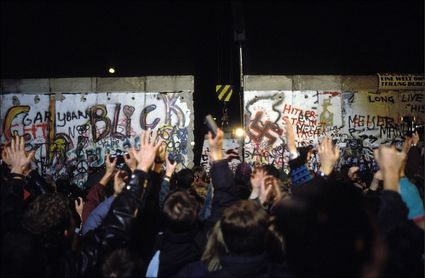 The Berlin Wall opens in November 1989.

VIENNA (JTA)-"Neither ox nor donkey can block the path to socialism," the East German leader Erich Honecker boldly declared on Aug. 14, 1989. Less than three months later, on Nov. 9, the Berlin Wall would fall.

Newsweek's then-Berlin bureau chief Michael Meyer called 1989 the year that changed the world. In "We the People," British historian Timothy Garton Ash described the opening of the Berlin Wall as "a moment of emancipation and liberation." Ron Zuriel, a Jewish photography enthusiast, went to the wall frequently in the days following Nov. 9 to capture the moment. He told Mark Kurlansky for his 1995 book "A Chosen Few" that East Germans "came into a different world."

Thirty years later, Garton Ash acknowledges that across Central and Eastern Europe, "the reality" of post-Berlin Wall Europe "did not live up to the dream." Such is the nature of revolution on the one hand, though it is certainly true that the fruits of 1989 were not evenly shared.

But if one community can be said to have been entirely transformed by the Velvet Revolutions of that year and the sometimes-bumpy transition from communism to democracy, it would be Eastern European Jewry.

After 1945, Holocaust survivors in Western Europe, augmented by immigrants from Eastern Europe, the Soviet Union and North Africa, were able to rebuild Jewish life following the destructive fascist experience. But Judaism under communism became what Kurlansky describes in "A Chosen Few" as a "death cult." Though community bonds remained, religion and Zionism were anathema to communism. Jewish identity became a secret and Judaism itself withered.

Things began to change in the late 1980s when non-Jews in Poland, for example, took a renewed interest in Judaism, leading to the birth of the Krakow Jewish Culture Festival. Yet it was only post-1989, after the communist monopoly on power had been eradicated, that Jewish life itself could be revived.

There were teething problems, particularly in Germany, as Kurlansky captured. Separated for 40 years, the two Germanys had developed two Judaisms.

"The biggest event of the year at the [East Berlin] synagogue was the annual memorial to Kristallnacht," Kurlansky writes, adding that though there was an official East German Jewish Community that put on lectures and cultural events, for most Jews in the GDR, their new religion was socialism.

After reunification, East Germans felt that they had been colonized by the West, their institutions dissolved and way of life dismissed.

Intracommunal conflict and questions surrounding financial sustainability have not gone away. Still, to survey the past 30 years is to witness Judaism, once buried, being brought back into existence. Anyone who has reported from the region since the fall of the Berlin Wall has heard their own stories of young people whose parents unearthed their Jewishness, bequeathing to their children a secret that they knew need not be hidden any longer.

Since 1989, Judaism in Eastern Europe has multiplied. The work of the JDC and Hillel International, Moishe House and the Lauder Foundation has given birth to new Jewish schools, community and cultural centers in Warsaw and Krakow, Budapest and Timisoara, and with it, new avenues and approaches to Judaism. Synagogues like Fraenkelufer in Berlin have been rejuvenated, new communities including Warsaw's Reform Beit Warszawa established, while the post-'89 generation of Jewish leadership like Alek Oskar, president of Organization of the Jews in Bulgaria, has arisen to take the reins of community institutions.

And the freedom to travel and the birth of cheap air travel has strengthened Eastern European Jewry's connection to Israel, as did programs like the Jewish Agency's MiNYamin Fellowship.

The fall of the Berlin Wall and the Velvet Revolutions of 1989 made all this possible. It was a victory for Jewish life. Communism could not provide the conditions necessary to live as a minority, be one Jewish, Roma or LGBT. Only liberal democracy offers the basis for stable Jewish life in Europe. This means not only the freedom of speech and thought, assembly and association, but also the right to private and family life and, as important, the rule of law and equal treatment thereunder.

Of course, whether in Hungary-an authoritarian state with a democratic facade where neo-Nazis recently demonstrated in front of a Jewish-run community center-or Poland, those conditions are now being deliberately undermined and the gifts of 1989 squandered.

"We know you can turn an aquarium into fish soup," so went the joke picked up by Garton Ash in 1989, "but can you turn fish soup back into an aquarium?"

The challenge after the fall of the Berlin Wall was, in other words, tremendous. Its anniversary is a reminder not just of the work that has been done in the name of liberty, democracy and rebuilding Jewish life in Central and Eastern Europe but that which is still to come.