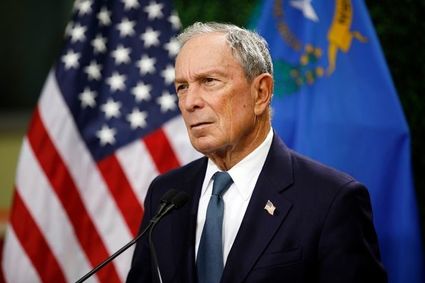 Bloomberg, 77, flirted with presidential runs in past election cycles before declining to run. As recently as March, he ruled out a presidential campaign this year, writing that he was "clear-eyed about the difficulty of winning the Democratic nomination in such a crowded field."

But now he is registering to run in the Democratic primary in Alabama, whose filing deadline is Friday, according to The New York Times. Although the filing does not mean that Bloomberg would definitely run, he has called a number of senior Democratic leaders to tell them he is considering a campaign.

If he does enter the race, just 2 1/2 months before the Iowa Caucuses kick off the primary season, it will upend an already crowded Democratic field. Bloomberg is a centrist who was a Democrat before running for New York mayor as a Republican, after which he switched to be independent. He recently returned to the Democratic Party.

Bloomberg's presence in the race may draw votes away from former Vice President Joe Biden, another centrist. He is the second billionaire to enter the Democratic race after Tom Steyer.

Last year, ahead of the midterm elections, Bloomberg pledged to spend $80 million to help elect Democrats. The ads he paid for focused on issues like gun control and the Republican tax plan. One $5 million ad campaign invoked the Pittsburgh synagogue shooting last year. He has been attacked by Republican leaders like Trump and House Minority Leader Rep. Kevin McCarthy.

Bloomberg served as mayor of New York City from 2002 to 2013, pushing through legislation in City Council so he could run for a third term, which he did successfully. He was a defender of controversial policing practices who also favored charter schools and expanded pedestrian spaces and services for residents in the city.

He founded Bloomberg LP, which would grow to become a business media empire that stood out by providing up-to-the-minute stock information through specialized computer terminals. His net worth is valued at $52.4 billion, according to Forbes.

Following his tenure as mayor, Bloomberg has aggressively advocated for anti-gun violence measures, as well as efforts to combat climate change. In the 2016 presidential election, he endorsed Democratic nominee Hillary Clinton over Donald Trump, saying in a speech at the Democratic Convention that year, "together, let's elect a sane, competent person with international experience."

In 2014, he was the inaugural recipient of the Genesis Prize, a $1 million award sometimes called the "Jewish Nobel." The award honors individuals who serve "as an inspiration to the next generation of Jews through their outstanding professional achievement along with their commitment to Jewish values and the Jewish people." He donated the prize money to social entrepreneurs.