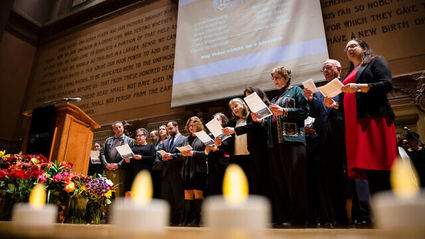 Pennsylvania Gov. Tom Wolf Joins in mourning after the mass shooting of Jewish worshippers in the Tree of Life*Or L'Simcha Synagogue in the Squirrel Hill neighborhood of Pittsburgh.

(JTA)-Eleven memorial candles stood on a table at the start of the public memorial service for the attack one year ago on the Tree of Life synagogue building.

Family members of the 11 people killed in the attack walked around the table holding hands as a string ensemble played in the background. They then lit the candles, wiping their eyes and hugging each other.

The Jewish community was joined at Sunday's ceremony by members of the Christian and Muslim faith communities, as well as city and state officials. The ceremony was held under the banner of "Remember. Repair. Together."

Cindy Snyder of the Center for Victims called the shooting "an act driven by hatred" and "an attack on all people of the Jewish faith."

Those killed, who were members of the three congregations that worshipped in the building, were remembered in a video commemoration.

Rabbi Jeffrey Myers of the Tree of Life-Or L'Simcha congregation chanted the Al Molei Rachamim memorial prayer. Rabbi Jonathan Perlman of New Light congregation recited a Mi Shaberach asking for the healing of the body and the soul. And Rabbi Doris Dayen of the Dor Hadash congregation called for those who were on site on the day of the attack, including first responders, to rise and recite with her the Birkat Hagomel prayer, which is said when one has come through a dangerous situation.

Myers told the crowd that "God continues to revive my spirit and direct me on the right path." That path, he said, is "to decry any and all that weaponize 'h' speech," the letter h referring to hate.

"The love that continues to pour in from across the world" gives him hope, he said, which he called "a better h word."

Perlman received an extended round of applause when he called on the federal and state governments to take action on gun control, "which they promised us" they would do. He also criticized the media for "retraumatizing" the victims of the attack and asked the news outlets to "just leave us alone so we can mourn."

He said federal prosecutors want to "create a show" with their decision to have a trial even though the shooter, Robert Bowers, has pleaded guilty.

"They want to bring in reporters and they want to traumatize us again." Perlman said.

Federal prosecutors are seeking the death penalty, a choice that has been at odds with some members of the congregations affected by the attack.

Prior to the ceremony, thousands around the world participated in "Pause with Pittsburgh," a virtual memorial event that included the memorial prayer for the dead. The memorial was organized by the Jewish Federations of North America. Members of the Pittsburgh community used the day prior to the memorial for volunteerism and Torah study at several venues.

Though the synagogue building remains closed, thousands made a pilgrimage to the site over the course of Sunday, the Pittsburgh Post-Gazette reported.