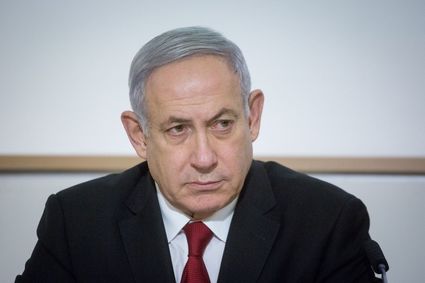 Israeli Prime Minister Benjamin Netanyahu delivers a statement to the press after a security cabinet meeting in Tel Aviv, Nov. 12, 2019.

JERUSALEM (JTA)-Benjamin Netanyahu has been charged in three corruption cases, marking the first time a sitting Israeli prime minister has been indicted.

The charges, announced on Nov. 21 by the Justice Ministry and Attorney General Avichai Mandelblit, include bribery and breach of public trust.

Netanyahu has denied all the charges and has called the investigations against him a "witch hunt."

He has 30 days to request that the Knesset grant him parliamentary immunity in order to avoid a criminal trial. Government ministers are required to resign if faced with a criminal charge but not the prime minister.

The most serious charge is for bribery in what is known as Case 4000, which alleges that Shaul Elovitch, majority shareholder of Bezeq, received political favors for the Israeli telecommunications giant in return for favorable coverage of Netanyahu on the Walla! news website owned by the company. Conviction on the charge carries a maximum sentence of 10 years in prison.

Netanyahu was indicted for breach of public trust in two separate cases.

In Case 1000, he is accused of accepting illegal gifts from Hollywood producer Arnon Milchan, including Cuban cigars and pink champagne. The gifts totaled about $200,000. In return, Netanyahu allegedly helped secure a U.S. visa for Milchan and supported a law that would give tax breaks to the billionaire if he moved back to Israel.

In Case 2000, the prime minister allegedly advanced a law that would have hurt the free daily newspaper Israel Hayom, funded by the U.S. casino magnate Sheldon Adelson, in exchange for positive coverage from the popular general circulation Yediot Acharonot.

Netanyahu defended himself against the charges during a four-day pre-indictment hearing in October.

The Justice Ministry also announced that Yediot's publisher, Arnon Mozes, as well as Elovitch and his wife, Iris, will be charged with bribery.

The announcement comes a day after Blue and White party head Benny Gantz said he had failed to form a government coalition. Gantz had worked for about a month to join with Netanyahu and his Likud party in a unity government in which they would alternate serving as prime minister.

One of the sticking points involved whether Netanyahu would step down as prime minister in favor of Gantz if he were indicted.

Blue and White said in a statement: "A prime minister up to his neck in corruption allegations has no public or moral mandate to make fateful decisions for the State of Israel. Because there is concern, whether or not the charges prove to be true or without merit, that Netanyahu will make decisions in his own personal interest and for his political survival and not in the national interest."

Mandelblitt in a televised statement about an hour after the charges were released, said that "today is a hard and sad day." He said he made the decision to indict Netanyahu "with a heavy heart, but wholeheartedly."