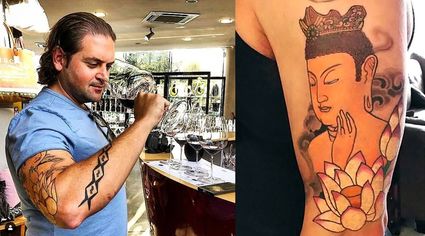 Travel and liquor writer Jake Emen is on a mission to get inked around the world-despite the Jewish religious ban on tattoos.

SAN DIEGO (JTA)-I'm lying on my side on the first floor of a nondescript low-rise residential tower in Tokyo meditating on the fact that pain is finite. There's an odd sound in the air, reminiscent of blunt-edged safety scissors cutting into thick construction paper.

As an adult, my connection to Judaism has largely been a spiritual and cultural one rather than religious. Part of that is embracing other people and cultures from around the world, and understanding their own beliefs and traditions-and there's no better way to begin understanding than to partake in something yourself.

Whenever I travel, I get tattooed, making for an incredible cultural experience-not to mention a one-of-a-kind souvenir.

My first tattoo was a Star of David, received mere days after turning 18 while attending New York University. My thought process was that my parents couldn't be that mad at me if I got a Jewish tattoo, right?

Ah, the naivete of youth. They've since come around to the tattoo-touting tendencies of their son though as they've come to understand more about what it means and why I pursue it.

I'm well aware that religious Jewish law forbids tattoos, but my journey to getting inked actually has an intrinsic connection to my Judaism.

For 18-year-old me, the Star of David was a purposefully ironic call back to the tattooed numbers of identification forced upon prisoners in concentration camps during the Holocaust, as well as the yellow Stars of David that Jewish people were compelled to wear on their clothing as a means of persecution by the Nazis.

These "Jewish badges" were meant to shame the wearer, to mark them so that everyone could know who they were and could treat them accordingly. Some six decades later, I wanted to broadcast to the world that I was proud to be Jewish. Here it is on my body for all to see, and I dare anybody to take issue with what it means or who I am.

Traveling for tattoos to explore culture and traditions around the world

That rhythmic noise I was hearing in Tokyo was artist Horimitsu performing a traditional tebori, or hand-carving tattoo, along the upper half of my right arm. That would make my skin the construction paper in this analogy, and far from a pair of safety scissors, the tool he's wielding is a narrow wooden stick affixed with a tight grouping of needles.

"Hori" indicates that he's a master of this craft, having learned the trade by apprenticing under his master, Horitoshi, for many years. He gave me a tebori tattoo of the Amida Buddha, also known as Amitabha or the Buddha of Infinite Light.

This was the first time I had purposefully headed halfway around the world to come back with an irreplaceable keepsake, a memory I would keep forever emblazoned on my body. Traditional Japanese tattoos, called "irezumi," are deeply layered with meaning, with Amida representative of traits such as compassion, wisdom and forgiveness, often paired with a lotus flower depicting purity and enlightenment.

These are all qualities I strive for, even if I often come up short, and those of the Amida also overlap to a great degree with what we're taught it means to be Jewish. The tattoo, I hope, ties me to those ideals, while having it performed via tebori by a respected master of the craft in Japan helped me connect more deeply to the meaning and the process.

In another instance, my tattoo wanderlust took me to New Zealand. For the Maori, tattoos once were crucial social and familial indicators, but the art and ritual has largely been lost in the modern era. While in Auckland, I received a Maori "ta moko" tattoo with traditional wooden tapping tools from perhaps the only Maori artist still dedicated to a full-time practice of the ancient art.

The tattoo depicts two sets of shark's teeth, a revered animal to the Maori, and here representing protection and spirituality, enclosed around ocean waves, which for the seafaring Maori represent life's journey and connection to the whole. Fitting, perhaps, not only for my own journey but for the Jewish Diaspora as well.

Most recently, last year in Cambodia, I received a "sak yon" tattoo performed by bamboo needle. Such tattoos are a spiritual practice predating Angkor Wat, replete with prayers and water blessings. The painful ordeal was performed in Phnom Penh and involved making an offering to the artist, a renowned tattoo master. The incantations essentially translate to strength of character and success in life-two things any parent, Jewish or otherwise, would wish for their children.

The common thread through most of the tattoos I have gotten is an interconnectedness to the world at large, the billions of people living in it, the universe stretching beyond it and all of the many ways humanity seeks to both honor and make sense of it all.

A few years ago, I visited my parents in Arizona and found a framed wraparound photo of one of my tattoos-my left arm is consumed entirely with an astronomy sleeve tattoo-on a bookshelf. Shocked to see it, I asked my parents why they had printed and framed the photograph. They said, "Well, it's a part of you and we love you."

My parents may always express a bit of a surprise at the revelation of yet another recently acquired tattoo, but these days it's usually met with a smile and questions about whether or not it hurt and who performed it.

The late Anthony Bourdain once discussed the subject of getting tattoos while on the road in Parts Unknown, saying "Another tattoo is... a reminder that you're still alive and lucky as hell."

Looking at my tattoos and what they mean reconnects me to the moments and places where I got them, to who I was and what I was going through at the time. It reminds me that I'm still alive and lucky as hell-and still a proudly Jewish, proudly tattooed person connecting to the world and finding spirituality wherever and however I can.