'We're here to save lives,' stress those associated with Israel's Rescuers Without Borders 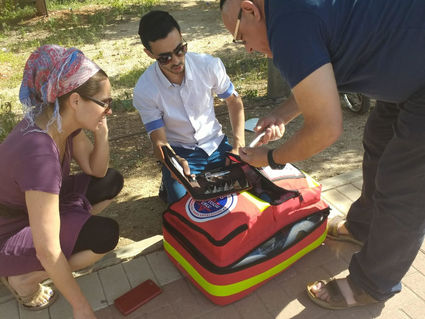 (JNS)-It was the year 2000, at the beginning of the Second Intifada, and Arab terror attacks were being carried out against Israelis on a nearly daily basis throughout the country, and particularly on the roads in Judea and Samaria.

After one particular deadly attack, former Sephardic chief Rabbi of Israel Rabbi Mordechai Eliyahu approached one of his aides, Arie Levy, who had been a volunteer medic and ambulance driver with Magen David Adom (MDA) for about six years, asking why no emergency response organization existed in Judea and Samaria in order to react in a timely manner to save lives.

Levy, now 53, who arrived in Israel as an immigrant from France with his family as a child, agreed with his protégé that something had to be done. Working side by side with MDA, Levy founded "Hatzalah Judea and Samaria," an emergency first-response organization dedicated to saving lives in Judea, Samaria, the Old City of Jerusalem and other parts of the country that were especially under attack.

Now known by the name "Rescuers Without Borders," the new organization, made up entirely of volunteer medics, began taking emergency calls and filling in gaps of MDA coverage.

The organization's director of development, Natalie Sopinsky, tells JNS, "We are the Red Cross of the West Bank. We are volunteer medics and first responders who arrive at the scene of car accidents, terror attacks and more. When you call 101 [Israel's version of 911], we come."

Sopinsky, an immigrant from Delaware who lives with her husband and five children in the southern Hebron hills community of Sussya, says that during the years of the intifada, "those who were hurt in terror attacks couldn't be saved because there were no medics. So we decided we would train people here, in our areas."

She said the organization that today boasts 950 volunteer first-responders works hand in hand with MDA. "We overlap with MDA. We train with them. MDA gives a course for volunteer medics, which is expensive, and we subsidize the funding for our volunteers."

She adds that while Rescuers does not maintain a fleet of its own ambulances, when her donors give money, she can work with MDA and direct them, for example, as to which community in Judea and Samaria is in need of ambulance to be stationed there.

The organization also distributes emergency equipment like burn kits, defibrillators and other medical necessities to the communities themselves for use in situations where every second counts. They also have volunteers trained in search and rescue, who collaborate with the Israel Defense Forces and other relevant authorities in times of natural disasters.

'We believe that life is important'

After only five years up and running, the organization decided that not only would its mission be to save lives in Israel, but around the world.

December 2004 saw one of the deadliest natural disasters in the modern world when an earthquake and resulting tsunami struck in the Indian Ocean killing more than 200,000 and wounding nearly 500,000 people in countries such as Indonesia, Sri Lanka, India and Thailand. Levy explains that when the disaster happened, within hours, a team of medics representing his organization hopped on a plane to Sri Lanka to help treat the wounded.

It was after they returned that Levy decided that operations needed to expand globally. Known internationally as Sauveteurs sans Frontières (SSF)/Rescuers Without Borders, Levy has assisted in setting up 14 local branches and training licensed first responders in 14 different countries around the world, including Mali, Ethiopia, Haiti, Nepal and France, among others.

Levy says that in 2017, when Hurricane Irma-the strongest Atlantic Ocean hurricane ever recorded-made landfall on the Caribbean island of Saint Martin, destroying as much as 90 percent of the buildings there, his medics stationed in Guadeloupe were the first ones to arrive on the scene to treat the wounded, just four hours after medical personnel were allowed in.

Politics, however, plays a role in the work of Rescuers, locally and internationally. According to Sopinsky, as CNN was filming the group's heroic efforts in Sri Lanka, they decided to turn off the cameras once they found out the group of medics consisted of Israeli "settlers." That incident did play a role in the organization's name change.

Yehudit Tayar, an organization spokesperson and emergency first-responder living in the Binyamin (southern Samaria) community of Beit Horon, tells JNS that the bottom line is "we believe that life is important." The former IDF combat soldier details how over the years she has treated countless numbers of Jews and Arabs who live in her region in a variety of emergencies.

For her, the establishment of the organization in 2000 was a game-changer. "Before 2000, it could take hours for a medic to arrive, and sometimes there was no ambulance available. But now, having the Rescuers' state-of-the-art equipment with us 24/7 is so important. Time [getting to the scene of incident quickly] equals life. That is the bottom line."

'You can live or visit here with confidence'

Sopinsky says that due to the current reality, the organization helps people injured in rock and firebomb attacks on the roads in Judea and Samaria on a near daily basis.

Rescuers is also involved in helping those in need in other parts of the country. In the south, the group has helped renovate bomb shelters near the Gaza border and started an animal-therapy program using horses for kids with post-traumatic stress disorder in the often bombarded community of Nachal Oz.

A pilot program is also being tested involving the use of a brand-new ballistic blanket called the "Armadillo," which can protect rescuers and their patients under rocket fire from flying shrapnel. (The device was designed by anti-terror security expert Marc Provisor.)

The organization also looks to enhance the lives of residents in Judea and Samaria in other areas by funding sports fields, synagogues and the renovation of social halls, along with other security projects. 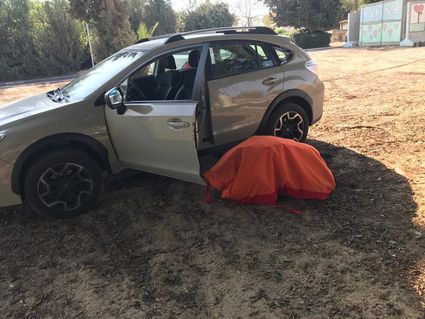 A brand-new ballistic blanket called the "Armadillo," which can protect rescuers and their patients under rocket fire from flying shrapnel.

But perhaps the biggest project right now, according to Sopinsky, is the construction of a top-notch training simulation center in Givat Ze'ev, near Jerusalem, where emergency situations from car accidents, drownings, the delivering of babies or other scenarios can be re-enacted. This will give first-responders the opportunity to practice various medical exercises, as the simulations will be as close to the real thing as possible.

Next year, the group will celebrate 20 years of saving lives. Sopinsky says what people should take from that milestone is that thanks to Rescuers Without Borders, "you can live here or visit here safely and with confidence. This might still be the Wild West, but thanks to our volunteers, you are not alone."

Natalie Sopinsky will be in Winter Springs on Sunday, Dec. 8, at Fellowship Church, 5340 Red Bug Lake Road at 7 p.m. This engagement is open to the Jewish and Christian communities.