Honor and remembrance on the way to Israel-Part I 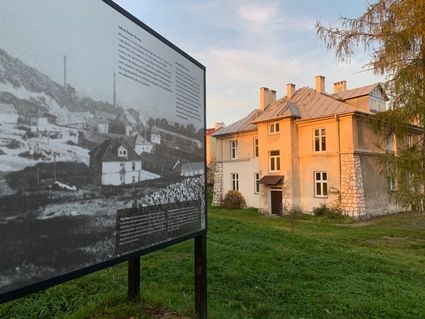 SS Administration Building at Plaszow Concentration Camp, from which Commandant Amon Goeth would shoot at prisoners laboring (dramatized in Schindler's List as from his villa).

This is Part I of the men's trip to Israel, sponsored by Momentum and JOIN Orlando. Rick Geller and Jason Toll went to Poland ahead of the group and met up with them all in Israel.

Poland is on the way to Israel, my traveling companion, Jason Toll, and I realized. Invited to join 180 men on a "Dad's tour of Israel," we created our own, adult version of "March of the Living"- a pilgrimage to deepen our understanding of Jewish history's darkest age, and to give us an opportunity to honor three Holocaust survivors in our lives.

Krakow's Old City, never bombed by the Nazis, is one of Europe's most picturesque places for immersing oneself in pre-war architecture. There, Jason's great aunt, Tess Wise, partnered with the renowned Jagiellonian University, founded in 1364, to initiate a Summer Institute bringing Holocaust education to Europe's educators. Tess's legacy extends far beyond the Holocaust Center in Maitland.

Krakow was also home to Felicia and Eli Friedman, special friends to me and my wife, Gabriela, when we lived in Dr. Phillips. Co-founders and a frequent presence at the Southwest Orlando Jewish Congregation, Felicia and Eli embodied an innate kindness and love for each other, and for Judaism, that swept aside their past horrors.

They met as prisoners in the Krakow Ghetto. Amid squalor, Eli came upon a beautiful woman in debate, defending God's existence. Felicia had smitten Eli, beginning a love affair that would outlast their tormentors by more than half a century.

Little remains of the Ghetto. Gleaming modern apartment buildings meet the huge demand for housing near Krakow's center. Even by the early 1990s, the architecture had changed so drastically that Steven Spielberg instead filmed "Schindler's List" in the historic Jewish district of Kazimierz, which better captured the War time-period. Today, Kazimierz is a gentrifying neighborhood with reviving Jewish life-synagogues, kosher-style restaurants, and shops.

Our exceptional tour guide, Bartek Lisik, walked us from Kazimierz, across the Vistula River, to one of the few remaining fragments of the Ghetto wall. Shaped like tombstones, the wall today recalls the Nazis' degenerate sense of humor. Two blocks away, at Oscar Schindler's pots and pan factory, a museum displays portraits of the 1,200 he saved.

After the Ghetto's liquidation, the Nazis imprisoned Felicia and Eli at the nearby Plaszow Concentration Camp, today a short ride away on Krakow's light rail. There, the sadistic commandant, Amon Goeth, killed Felicia's cousin in front of her. Later, to hide evidence, Nazis forced Eli and other slave laborers to exhume and burn corpses from a mass grave.

Many of you already know these horrifying images and places from "Schindler's List." To experience them in the imagination is one thing. To experience where they occurred, in three dimensions, is an altogether different, very deep experience.

Plaszow today is mostly fields and ruins. No fencing remains, but signs urge visitors entering to "respect the grievous history." Now a public park, we saw couples strolling and others riding bicycles. Jason expressed his discomfort. However, visitors cannot escape the large posters of historic photographs memorializing where barracks had once housed prisoners and the site of a mass grave, perhaps the one where Eli had labored. A 40-foot-high monolith of five figures standing shoulder to shoulder, heads bowed under the weight of a stone slab-and with a crack through their hearts-rises prominently over the tallest hill. It is stunning at sunset.

It is virtually impossible to smile here. The remnants of atrocity-a 70-foot- long display of hair and braids shorn from victims of all ages, enough shoes for 40,000 people, Block 11's basement where the Nazis first experimented with Zyklon B on Soviet POWs, and a walk through a gas chamber-are all either silently poignant, moving, or sickening.

The Nazis replaced the gas chamber and crematoria at Auschwitz I, too small for their goals, with four at nearby Birkenau, each of which could asphyxiate up to 5,000 victims a day. We visited their ruins, three destroyed by the Nazis in an attempt to hide evidence at the War's end, as well as Gas Chamber IV, where prisoners detonated explosives to stop the killing-a little known suicide mission. The Nazis killed 450 prisoners while either quashing the rebellion, or in retribution.

Birkenau is massive-roughly the same land area as Downtown Orlando-and the Nazis had plans for expansion. Felicia survived its horrors.

Several years before Eli died, he and Felicia moved to New York, close to the family they had started. Long before, the odds against them having a family and reaching old age were staggering. Out of 67,000 Krakow Jews before the war, only 3,000 survived. Their faith and love for each other had played no small role in their survival. 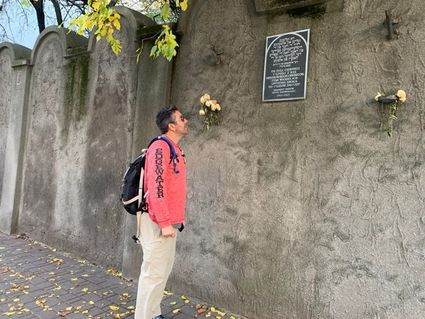 Jason Toll at a fragment of the Krakow Ghetto Wall, shaped like tombstones.

A courageous Christian friend, Maria, a daytime office worker at the munitions labor camp where the Nazis imprisoned Tess, smuggled-in street clothes. A brazen teenager, Tess changed out of her striped pajamas and, with Maria, walked out of the camp, past the armed guards, and went into hiding.

Having honored Tess, Felicia, and Eli, Jason and I then joined our Orlando friends on the remarkable Momentum Men's Tour of Israel. Momentum seeks to increase knowledge of Jewish history, strengthen love within families and marriages, and enrich faith. Tess and her late husband, Abe, Felicia, and Eli had all embraced these goals with their lives and achievements. After visiting some of the most Godless places on earth, it was time to find God.

Rick Geller is an attorney with Fishback Dominick in Winter Park.