The Siegels deck their lawn with Chanukah decorations! 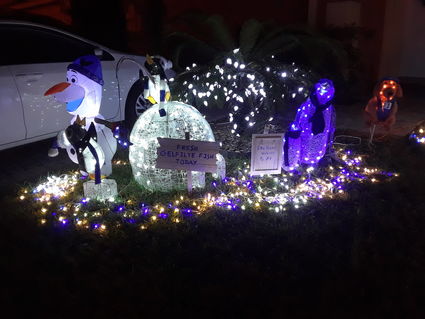 Shown here (l-r): There's Olefstein with a blue hat, Frankie and Stevie who run Gelfilte Fish, Miriam and Sheva (named after Mary and Elisheva) who just arrived at Ellis Island, and Jakob the pup.

Driving into a small gated community in Casselberry, scenes of lit-up snowmen, reindeers, Santas, and Christmas creches adorn many front yards-typical scenery for this time of year. Then, suddenly, what's this? In front of one house is a display of Chanukah décor alight in blues and whites!

The lighted yard is the inspiration of Mary Siegel, wife of Rabbi Arnold Siegel and mother of Elisheva Siegel. She came up with the idea when the family lived in Bartlett, Tennessee, more than 20 years ago when Elisheva was in kindergarten and the only Jewish child in the school. The Siegels had the choice of just keeping quiet about being Jewish or sharing their faith with the community. They had no idea how people would react-would their daughter be teased or bullied? Deciding to be upfront about their heritage, Mary placed a menorah in their front yard at Chanukah and used it as a teaching tool. She also shared with Elisheva's classmates and teachers about all the Jewish holidays, even using cookies in various Judaica shapes as teaching tools. They shared their Jewish heritage in a welcoming way. 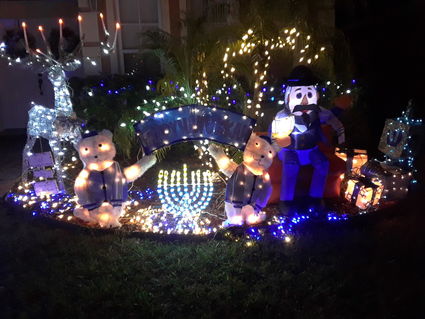 When Elisheva was in middle school in the Great Lakes, Mary bought their first reindeer and named him Sol-he is the little-known reindeer Mary said. Over the years many characters have been added to the display, each with its own story. Zaydee is the newest addition. He sits on a bench, making him the "Mensch on a bench." Mary found him at Bed, Bath & Beyond and couldn't resist buying him. Penquins Miriam and Sheva are named after Mary and Elisheva. They are arriving from Ellis Island-a nod to all those who have come through that port. Penquins Frankie and Stevie sell Gelfilte fish, and no, that is not a misspelling (get it? G-elf-ilte). Moshe and Schmuli are the two bears flanking the Chanukah menorah, and Jakob is the puppy. Olafstein ("Olaf" is a character from Disney's "Frozen" and very popular among children) was chosen because he has a blue hat. And speaking of blue hats, many mailboxes in the neighborhood have red "Santa" hats hung on them. The Siegels have a blue hat on their mailbox.

What do the neighbors think? They love it. Mary said they have received cards from neighbors who say they love the display. People walking their dogs passed the house comment to Mary about how much they like it. Even Santa gave thumbs up when he came through the neighborhood on the fire truck.

In this day of such horrific anti-Semitism demonstrated all over the world, it is wonderful to see this festival of lights on display in the Siegel's front yard bringing joy to so many people.