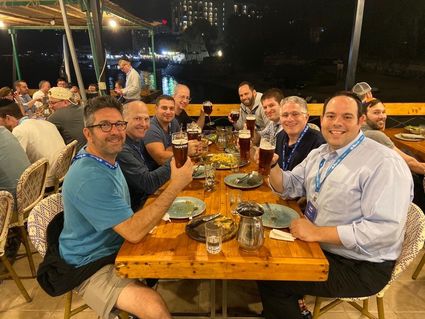 I recently returned from the annual Momentum Men's Trip to Israel. It was my third trip-the first with a friend more than two decades ago and the second for a bar mitzvah in 2018 with a bunch of 13 year olds and their families. Three different experiences, for sure.

Momentum is an organization based in Washington, D.C., and in Israel whose mission is to build Jewish continuity and connection to Israel and Judaism. For 10 years, it has taken to Israel groups of Jewish mothers who have children under 18 years old. Six years ago, via separate trips, the organization began taking men as well.

This most recent men's trip included 180 of us from around the United States and South America, and for the first time, Israel itself. Eight of us flew-in from Metro Orlando.

Author and motivational speaker Charlie Harary led the tour. How should we respond to the question, "How are you?" According to Charlie, the answer should be "Awesome! Life is awesome"-and mean it. The trip itself lived up to Charlie's answer, although I've been using the word, "Phenomenal!"

Friends who had previously participated in the Momentum trip urged me to go-and I already knew a few men who would take part. I expected to have a good time with my fellow travelers, to build my connections with Israel and Judaism, and to come away with ideas on how to build these things with my family, particularly with my kids. Mission accomplished!

I did need to overcome a few concerns. For one, while I had four Jewish grandparents, have a Jewish wife, had a bar mitzvah at age 13, and belong to a local synagogue, I'm casually observant. Orthodox Jews run Momentum. Would I understand what they were talking about, relate to them, or even care? Fortunately, the trip required no level of Jewish observance. Momentum meets you where you are. Our group of eight included two Orthodox rabbis, someone who had attended Jewish day school, someone who grew up participating in the Reform movement but is now Orthodox\... along with those of us who are much more casual in our observance.

The Orthodox people running Momentum assume little knowledge of Judaism among participants. Everyone can sing some of the songs learned during childhood, and everything else is translated and explained. That said, I would recommend learning the words to Israel's national anthem, Hatikva, whether you plan to join a Momentum trip, or not.

I stayed in Tel Aviv the night before the trip started with another Orlando participant. He expressed trepidation that we would dance with other men and visit a men's mikva. This ritual bath involved taking a dip, sans bathing suit, in a cold stream running through a stone room carved into the side of a mountain in the Galilee. I shared his concerns to an extent, but afterwards both of us would say the experience was great.

I had assumed much of the messaging on the trip would bore me. That was that not the case. Harary, in addition to being a lawyer and involved in private equity, is an Orthodox Jewish motivational speaker. He is one of the most passionate, relatable, and engaging speakers in the Jewish world today. Everyone should know of Charlie Harary, and in the Orthodox world, many do.

Several things stand out, including 15 bar mitzvahs on Masada, the mountaintop fortress where Jews committed mass suicide rather than submit to Roman rule following the Second Temple's destruction. We climbed 1,300 feet in 45 minutes to the summit. Among those bar mitzvahed were Russian immigrants who did not have the opportunity to have one before the Soviet Union's fall. It was quite meaningful, and also the most raucous bar mitzvah I've attended by a factor of at least 100-and I'm talking about the service, not the party.

We went multiple times to the Western Wall in the Old City of Jerusalem, including for a memorable Shabbat service. Harary led the service standing on a table, with his level of passion even higher than usual. 180 men pounded on the table in a circular dance and repeatedly broke into song. We attracted a huge number of onlookers, including hundreds of Asian tourists and women standing on chairs to see over the barrier separating the men from the women on the plaza. This was the first time I'd been a tourist attraction. Men not in our group joined in the jubilation. Some expressed shock that we were from the United States and not students at a nearby yeshiva, although our ages should have given that away.

Another "ahah" from the trip involved the reason for prayer and liturgy. I learned that the true reason to pray is to bring us closer personally to God. Previously, I had assumed prayers and liturgy were to fulfill what God wanted us to do. In other words, I had mistakenly assumed that praying was an end in and of itself.

Then there were the Israelis, both those accompanying us on the trip and those who spoke to us. Their stories, courage, and motivations were inspirational.

On our first evening we went to Latrun, a war memorial and tank museum where the Jordanians cut-off Tel Aviv from Jerusalem during Israel's War of Independence. A former tank commander, who had battled in Gaza and lost his best friend in action, explained how he worked through his fear. 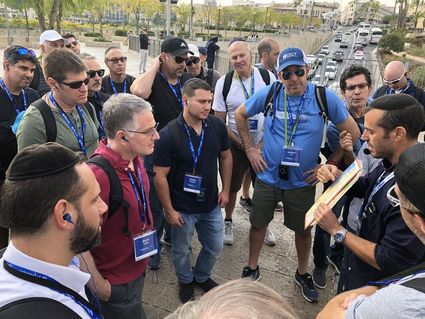 Tour guide Patrick Amar showing the group a map of the old city of Jerusalem from 1948 and 1967 by the entrance to Jerusalem, right next to Jaffa Gate.

Likewise, Alon Wold, who spoke at the memorial on Ammunition Hill in Jerusalem, a strongpoint taken by the Israelis in the 1967 Six Day War, was incredible. He was only 10 months old when his father, a paratrooper, died during the battle, which led to Jerusalem's reunification. He was "raised" by his mother and also by his father's comrades in arms. Over his mother's fears, he himself became a paratrooper and with later assignments being in a number of Israeli embassies, including in Cairo. Hearing about the Israelis' mindset and sacrifices connected me to the State of Israel in a newfound way.

Momentum did not look for us to put on black and white clothes before boarding our planes back to Orlando, but did encourage us to find ways to enhance our connection to Judaism. This could be through actions like lighting the candles on Friday, or saying the S'hma daily with your kids. For me, I'm planning to enhance my connection by watching weekly 5-minute Torah commentary videos from Harary with my family and to discuss them for a few minutes. It isn't a big time commitment, and everyone ought to know Charlie Harary, so what's not to like?

For more information on the Momentum trips and other ways to connect, contact Rabbi Gabi Gittleson, direction of JOIN (Jewish Outreach Initiative) Orlando at Rabbig@joinorlando.org.