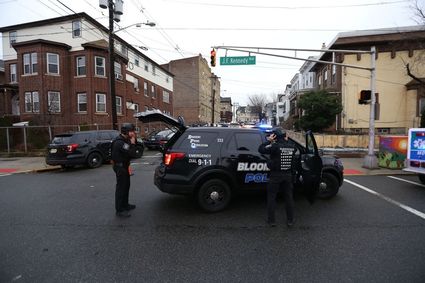 Security officers in Jersey City after the shooting there, Dec. 10, 2019.

(JTA)-The gunmen who entered a Jersey City kosher supermarket and engaged in a deadly shootout with police deliberately chose the store, the city's mayor said.

"Based on our initial investigation (which is ongoing) we now believe the active shooters targeted the location they attacked," Steven Fulop said on Twitter Tuesday night. "Due to an excess of caution the community may see additional police resources in the days/weeks ahead. We have no indication there are any further threats."

The mayor's tweet came hours after a news conference at which officials said there was "no indication of terrorism" or a hate crime.

Six people were killed, including a police officer and three civilians, in gunfire Tuesday afternoon that ended with an hours-long shootout at the JC Kosher Supermarket. The officer had been shot earlier at a nearby cemetery trying to head off two suspects in a homicide. Those two young gunmen were killed in the supermarket shootout.

On Wednesday morning in a new tweet, Fulop said that "Last night after extensive review of our CCTV system it has now become clear from the cameras that these two individuals targeted the Kosher grocery location on MLK Dr."

He added in a second tweet: "I'm Jewish and proud to live in a community like #JerseyCity that has always welcomed everyone. It is the home of #EllisIsland and has always been the golden door to America. Hate and anti-Semitism have never had a place here in JC and will never have a place in our city."

The dead police officer was identified as Det. Joseph Seals, a married father of five.

Two of the killed civilians were identified by Chabad.org as Moshe Deutsch, 24, and Leah Minda Ferencz, 33, who owned the store in the Greenville neighborhood with her husband, Moshe.

Moshe Ferencz had left the store moments before the shooting to pray the afternoon Mincha service at the synagogue located next door, according to the report.

"Although there is no credible or specific threat directed against New York City, I have directed the NYPD to assume a state of high alert. Tonight, NYPD assets are being redeployed to protect key locations in the Jewish community," he tweeted.

He added: "History teaches us how dangerous it is to ignore this kind of hateful pattern. We must stop anti-Semitism aggressively and decisively, and I call upon all New Yorkers to join in rooting out this threat."