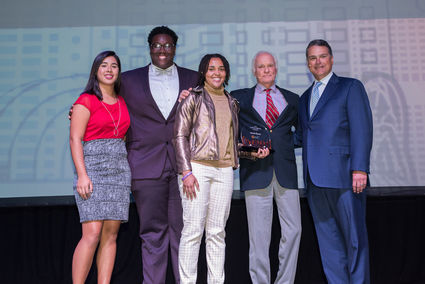 The Orlando Economic Partnership has awarded its James B. Greene award, the highest honor bestowed by the Partnership to a local community leader, Harris Rosen, president and COO of Rosen Hotels & Resorts. The award was presented at the Partnership’s recent annual awards dinner held at the Amway Center in downtown Orlando.

The James B. Greene Award, first presented in 1990, recognizes an individual whose work has contributed substantially to the economic prosperity of the region.

“Harris Rosen has been a true leader in our Central Florida community for decades,” said William T. Dymond, Jr., Partnership board chair, CEO and president of Lowndes and past James B. Greene recipient.  “His dedication to the Orlando region and its residents is evidenced by a legacy of philanthropic impact that spans the educational spectrum, from the Tangelo Park Program offering access to free preschool to the Rosen College of Hospitality Management, which has grown into the largest college of its type in the nation.”

Rosen began his career at the Waldorf Astoria in New York City as a file clerk in human resources and worked his way through the ranks of the hospitality industry before purchasing his first hotel, the Quality Inn International (now the Rosen Inn International) near Sand Lake Road and International Drive in 1974. Forty-five years later, Rosen is Florida’s largest independent hotelier with more than 4,400 associates serving guests at his eight Orlando hotels.

In order to provide a specialized education in hospitality, he opened the Rosen College of Hospitality Management at the University of Central Florida, which now ranks No. 2 among hospitality colleges worldwide and is one of the fastest growing colleges in the United States, with more than 3,500 students enrolled annually.

Rosen is also a champion for achievement through education and has demonstrated this through his commitment to provide free pre-school in the underserved Orlando community of Tangelo Park. Additionally, all students who graduate from high school in this community and plan to attend college or a trade school receive an all-expense paid college, vocational or technical education including books, tuition and room and board - all paid for by Rosen. The Tangelo Park Program provides an impressive 7:1 return on every dollar Rosen contributes to the program. He has now extended this same plan to the Parramore neighborhood in Orlando.