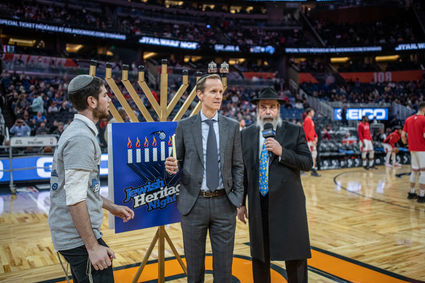 Who knew that many years later, despite our efforts and the efforts of others, "Never Again" has morphed into "again and again and again! (I thought that present and future generations would learn the lessons from the great tragedy committed by the Nazis who murdered 6 million Jews back in World War II.) But, so far in the past year of 2019, who could have imagined: That a prominent 84-year-old Holocaust Survivor, whose life has been threatened in Italy, would now need police protection to walk in the streets?

That we would see Jewish buildings and houses of worship defaced with Nazi-like yellow stars on the 81st anniversary of Kristallnact?

That religious Jews would be beaten up, spat upon and harassed on the streets and subways of New York City, home to the largest Jewish population? (And my home town!)

That Jewish students would be harassed at our nation's universities and intimidated for no other reason than their support of the State of Israel?

That elected officials in the United States and Great Britain would now openly spout anti-Semitism in the halls of Congress and Parliament?

And so much more... so much more! (I even hesitate to wear my Star of David sometimes, but I always do!)

Actually, what I listed above isn't even the half of it!

(I would need more than one hundred columns to list all this horror that happened in 2019 alone, so I will stop, but you get what I'm saying.)

Let's change to a 'lighter' subject about Jewish unity and pride ...

Dovid Dubov, who is the program director of Chabad's Jewish Heritage Night, sent in this wonderful article about the largest Menorah lighting ceremony in Central Florida's history: "Chabad just celebrated an amazing Chanukah event with the Orlando Magic at the Amway Center Monday, Dec. 23.

"This was the largest Menorah Lighting ceremony in Central Florida history! The Menorah was lit at halftime on center court with the president of the Orlando Magic, Jeff Weltman. The blessings were recited by Rabbi Sholom Dubov, director of Chabad of Greater Orlando.

The event started with a performance by Chasidic rapper Nosson Zand at the Chanukah Fan-fest outside the Amway Center.

This was an event that involved the entire Jewish community. The National Anthem was sung by Jewish Academy of Orlando students, there was a Jewish Heritage Night basketball pregame show and postgame layups, all topped off with the Grand Menorah Lighting for the very first time before 20,000 Orlando Magic fans.

Jewish Heritage Night is all about promoting Jewish unity and pride. Spreading the light and the awareness of Chanukah throughout the world and proclaiming the timeless message that light ultimately triumphs over darkness.

Jewish Heritage Night is a proud partner of the Orlando Magic and a project of Chabad of Orlando.

And now a lovely and loving young lady, a Jewish Pavilion Mensch...

I refer to PENNY D'AGOSTINO.

What would a Jewish Pavilion holiday celebration be like without Penny Goldstein D'Agostino?

Penny has entertained the Jewish Pavilion seniors for more than ten years at Chanukah, Purim, and other holiday celebrations all over town. She led a senior choir at Brookdale Altamonte for many years and continues to sing at their facility regularly. She also performs monthly at Life Care Center on behalf of the Jewish Pavilion.

Penny has a superb voice and her range is incredible. The Jewish seniors are especially touched by songs from their childhood such as "Bei Mir Bist Du Schoen" and "My Yiddisha Mama." They wait to hear songs from their favorite musicals, such as "Fiddler On The Roof" and "Yentl."

You can always count on Penny for incredible entertainment. She also performs at Jewish Pavilion events such as the Jewish Pavilion Bi-Annual sponsors breakfast, where she composes new music on behalf of the sponsors.

Penny has served as a cantorial soloist, so her knowledge of prayers and liturgy is immense. When she leads Shabbat services, the residents are often brought to tears when remembering their favorite melodies from days gone by.

There will be a complete dinner. For cost per person and further information, RSVP by phoning BETHANNE WEISS AT 407-621-4023.

On Jan. 12th at 2 p.m. in the Maitland JCC Senior Lounge, the movie "Once Upon A Time In Hollywood" will be presented. It is directed by Quentin Tarantino.

On Thursday, Jan. 23rd at 1 p.m., the gathering will be at Millers Ale House, 477 East Altamonte Drive, Altamonte Springs. 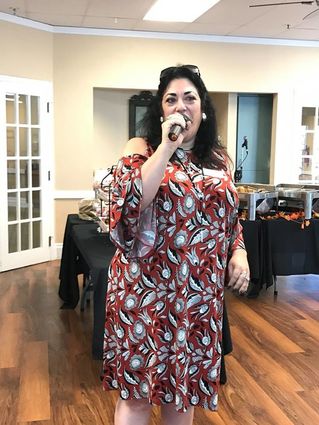 Leah and Sarah meet in the Colonial Mall. They are old friends and both have been married to their husbands for a long time.

"Nu, how are things with you Sarah?" asks Leah.

"Not too good really," Sarah replies. "I'm feeling quite low because I don't think Robert finds me attractive anymore."

"Because as I get older," replies Sarah, "he bothers less and less to look at me. When I was younger, he couldn't take his eyes off me."

"I feel so sorry for you," says Leah. "As I get older, my David says I get more and more beautiful each day."