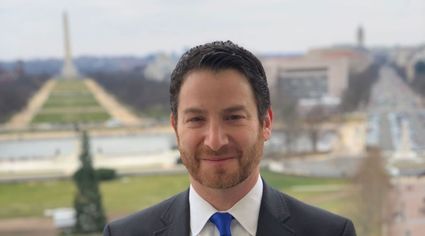 Joel Rubin says of Bernie Sanders: "It is so valuable to have a politician and a leader running who gets it in his kishkes."

WASHINGTON (JTA)-The Bernie Sanders campaign has named an insider in both the Jewish and Democratic establishments-entities that the presidential candidate has previously kept at a distance-as its liaison to the Jewish community.

The appointment of Joel Rubin, 48, a former Obama administration official with longstanding ties to an array of Jewish groups, was announced Thursday to the Jewish Telegraphic Agency.

Rubin was a co-founder of J Street, the liberal Jewish Middle East policy group, and recently served on the board of the Jewish Democratic Council of America, a group that slots into the mainstream both of the pro-Israel community and the Democratic Party.

"It's really exciting because Bernie is building a movement here that is one that is essentially engaging the diversity of America," Rubin told JTA in an interview. "What we're going to do is make sure that the Jewish voice and community is part and parcel of that movement."

Rubin also served as an aide to the late Sen. Frank Lautenberg of New Jersey and was a deputy assistant secretary of state for legislative affairs-the State Department's liaison to the U.S. House of Representatives-under President Barack Obama.

It's a signal of how markedly different this Sanders campaign for the Democratic nomination is from the one he ran in 2016 as an outsider, when it took months to address his Jewish background and upbringing. Now Sanders brings it up frequently.

Four years ago, the Sanders campaign was led by figures who reviled the establishment. Now the longtime Vermont senator is attracting Democratic establishment figures and bodies. It's partly a testament to how the establishment has adopted some of Sanders' policies, including a $15 minimum wage and expansive health care reform.

His Jewish outreach hire in 2016, Simone Zimmerman, generated headlines because of her roots in the insurgent anti-occupation IfNotNow group. She was forced out almost as soon as she started after obscenity-laced Facebook posts targeting Israeli Prime Minister Benjamin Netanyahu came to light.

Rubin is a well-liked Washington Jewish figure who is as comfortable on cable news defending the Iran nuclear deal that Israel reviled as he is schmoozing at an Israeli Embassy social event. He said his experience inside the establishment was precisely the point. When he was working in Congress, for Lautenberg and then for the Obama administration, he routinely engaged with the legacy Jewish organizations.

"That's going to be part of the work-I want them to hear from us and I want us to hear from them," Rubin said.

Rubin, who is from Pittsburgh, often cites his typical Jewish upbringing, his summers at Ramah camps, his membership in United Synagogue Youth and his time spent at university in Israel. In 2017 he contrasted for the Forward how participating in the March of the Living in Poland, a Holocaust education experience, influenced him as well as Jared Kushner, President Donald Trump's leading adviser and son-in-law.

"For me, the march deepened my resolve to work for a world of peace and tolerance. And it cemented my commitment to Israel as a refuge for the Jewish people," Rubin said. "What it did not do was inspire me to work for an administration that would shut out those fleeing mass murder, such as is happening today with Syria's refugees."

Rubin has his work cut out for him. As much as Sanders has embraced his front-runner status, he also continues to espouse positions on an array of policies that ensconce him on the party's left, including on Israel issues.

Sanders has advocated leveraging aid to Israel to influence its policies, and his campaign has embraced as surrogates Democrats who are hostile to Israel and have been accused of stoking anti-Semitism. They include freshman congresswomen Rashida Tlaib of Michigan and Ilhan Omar of Minnesota, as well as the Palestinian-American activist Linda Sarsour.

Rubin said part of his role would be to reach out to figures like Omar and explain how to better make their case among Jewish voters.

"There are communities who don't know how to talk about the Jewish community and to engage," he said.

Don't expect Sanders to distance himself from figures like Sarsour, however, Rubin said.

"We're not going to get sucked into the false choice our opponents try to put us into-'are you for Israel or against Israel.' We're not going to allow others to define for us what it means to care about being Jewish," Rubin said.

Sanders consistently performs as one of the top three candidates by all metrics: national polling, early nominating state polling and fundraising. He posted the strongest take of any Democratic candidate for the fourth quarter of 2019 by far, bringing in $34 million at an average of $18 a donor-$10 million more than his closest rival, Mayor Pete Buttigieg of South Bend, Indiana. (Among all candidates, Trump outdid Sanders, taking in $46 million.)

Sanders, like one of his main rivals, Joe Biden, has made the perception that Trump is stoking bigotry and division with his rhetoric a central issue of his campaign.

Rubin said he will not be shy about pitching Sanders' Jewish faith to Jewish voters, casting it as part of the senator representing himself as the voice of the marginalized and the persecuted, particularly at a time of increased attacks on Jews and Jewish institutions.

"It's a priority for Bernie that the Jewish community knows that it has a candidate here," Rubin said, noting that Sanders in 2016 was the first Jewish candidate to win major-party nominating contests.

"As a Jewish candidate he is a unique voice, he's a person whose personal bio is rooted in ending up on these shores as a result of suffering anti-Semitism abroad. This is the most quintessential Jewish American story if ever there was one, to have him out there for the American Jewish community, which is attacked and under siege. It is so valuable to have a politician and a leader running who gets it in his kishkes."