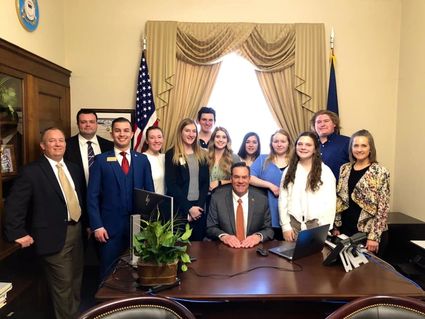 (JNS)-Rightly or wrongly, the first thing that comes to mind when most Americans think of Idaho is potatoes. Yet the northwestern state, which is also known for vast natural beauty and resources, is also home an emerging pro-Israel leader in Congress.

"It's not typically the rallying cry when it comes to campaigns," Idaho Republican Rep. Russ Fulcher told JNS about support for Israel in his state. "The people in the state of Idaho are generally very pro-Israel, and that's just part of our culture, part of our conservative nature. We grow up in a culture that appreciates Israel and that values its contributions" to the United States.

That may come as a surprise to many, considering that the Jewish community in Idaho numbers less than 1 percent of the state's estimated 1.8 million people.

Nevertheless, Fulcher, 57, who was first elected to Congress in 2018, said that many of his constituents have reacted "very positively" to his strong support of Israel in Congress, which has included supporting numerous bills and resolutions since he was sworn in more than a year ago.

Bills include the "Never Again Education Act," which would create a grant program at the U.S. Department of Education to enable teachers across the United States the resources and training necessary to teach students about the Holocaust and its lessons; "Strengthening America's Security in the Middle East Act of 2019," which would impose fresh sanctions on Syria, boost security cooperation with Israel and Jordan, and allow state and local governments the right to punish state or local contractors from engaging in boycotting Israel.

Fulcher remarked that the BDS movement harms not only Israelis but Palestinians as well.

He mentioned that the "Never Again Education Act" has yet to be discussed in the House Labor and Education Committee on which he serves.

Meanwhile, he has backed resolutions such as one to condemn the worldwide persecution of Christians; one "rejecting anti-Israel and anti-Semitic hatred in the United States and around the world"; one "condemning Iranian state-sponsored terrorism and expressing support for the Iranian people's desire for a democratic, secular and non-nuclear republic of Iran"; and one "opposing the lifting of sanctions imposed with respect to Iran without addressing Iran's nuclear program, ballistic-missile development, support for terrorism and other destabilizing activities."

'Harsh sanctions are the right action on Iran'

That has included, most recently, signing an executive order addressing anti-Semitism at the federal level, especially on college campuses nationwide-an action that was, according to the congressman, a "good move."

"He throws the spotlight back on [the issue], and sometimes, if you got cockroaches, you got to throw a light on it," he said, adding that the move was timely given the recent shooting inside the JC Kosher Supermarket in Jersey City, which resulted in the deaths of three civilians and one police detective.

"Every time it rears its head, we've got to shut it down," he said, adding that universities have to "take some ownership" of anti-Semitism on their campuses.

Fulcher has also supported the Trump administration's "maximum pressure" campaign on Iran since withdrawing the United States in May 2018 from the 2015 nuclear deal.

"Harsh sanctions are currently the right action on Iran," said Fulcher, who said that if the United States were to retaliate militarily, "it could have generated more support for Iran from neighboring interests more than choking off the economic channel."

He recalled at the first Republican congressional meeting after the strike being surprised that the Democrats had issues over the assassination of a man responsible for the deaths of so many across the Middle East and the world. "To me, it validates the fact that it wasn't about taking out Soleimani," he said. "It was the fact that Trump was associated with it."

'Israel is a very special place'

While Fulcher's support for Trump's pro-Israel policies is no surprise given that Idaho has long been a conservative red state, the congressman says that his faith as an evangelical Christian is what really informs him on his pro-Israel support.

"In my faith, Israel is a very special place," he said. "I found the business community culture and the people to be incredibly fruitful, fair, hard negotiators, but culturally productive, culturally fair, and I was impressed by that, especially given the region that the Israeli community operates in."

Despite the Jewish community's tiny size in his state, Fulcher has gotten to know Rabbi Mendel Lifshitz of Chabad Lubavitch of Idaho in the capital of Boise.

"He is kind enough to invite me to participate in their celebrations," said Fulcher. "I happily do so. We've struck up a friendship as a result of that."

Although he has yet to go to Israel in his congressional role, he has been to the Jewish state twice so far-once for business and another time as part of a biblical tour.

He said his visit to Yad Vashem in Jerusalem in 1997 also helped shape his current perspectives.

"I ran out the back door and threw up because what took place. I don't have one close relative, one close friend that I even know was part of that directly, but I do know this: That was evil manifested," he said.

"If we tolerate that with any segment of humanity, we are condoning evil at its absolute worst," he affirmed. "As long as I am in a leadership role-and even when I'm not-I'm going to do everything I can to prevent that type of thing from ever happening again. And I won't shut up."