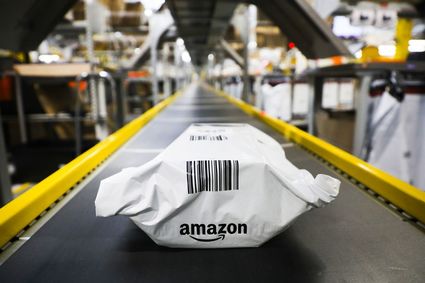 (JTA)-Walk into an Israeli post office or one of the many local stores that have lately been serving as ad-hoc delivery centers and you'll be confronted by a jumble of boxes sealed with the telltale black and blue packing tape from Amazon.com.

Orders from the American online retail giant have surged here in recent weeks, following the launch of the company's Hebrew-language online storefront and the offer of free shipping from the United States.

American immigrants to Israel have long relied on sites like Amazon to purchase products unavailable to them in the Jewish state, but the available evidence suggests a surge in purchases of the kinds of everyday items that were previously not cost-effective to have shipped in from abroad.

"I bought toys for my grandchildren at a fraction of the cost, makeup, hair products. My friend bought saline," Ronit, a resident of the Jerusalem suburb of Beit Shemesh, told the Jewish Telegraphic Agency. "It's good for my wallet because a lot of stuff is just so much cheaper: ziploc bags, shampoo, makeup."

Emanuel Miller, a British immigrant living in Jerusalem, said he had placed around a dozen orders since free shipping was offered. While he was initially skeptical, he realized he could save 25 percent on one-liter bottles of Listerine mouthwash.

"Not only that, but it comes directly to the customer, which is far more convenient than schlepping heavy bottles from the supermarket," Miller said. "So I ordered, and in bulk."

Comments on Israeli social media groups dedicated to finding deals on Amazon show that customers who previously restricted their purchases to more expensive or harder-to-get items, such as electronics and books, are beginning to buy household staples from the site.

"I have noticed that they prefer lower-priced items like Kleenex tissues and Contigo water bottles," Avi Parshan, the administrator of the Israel Deals on Amazon Facebook group, told JTA. "A surprising amount of people ordered Scott toilet paper, slinkies, and other toys."

The Amazon offer is not without strings attached. Free shipping doesn't kick in until shoppers spend more than $49, and orders over $75 are subject to Israel's 17 percent value added tax, or VAT. Many customers try to tweak their orders to fall in the sweet spot between those numbers.

It's also not clear how long the offer will last. The company ran a similar promotion for a month and a half late last year. Customers then had to spend more than $75 to get free shipping, though there did not appear to be a limit on weight. Local media reported that Israelis were ordering furniture online.

The Israeli business daily Globes reported at the time that Amazon was likely "conducting a trial to test the Israeli market" in order to see if "if Israeli consumers would be prepared to buy higher priced items and pay VAT in exchange for free shipping." The experiment appears to have worked, because Amazon launched its Israeli website almost a year later.

According to Nir Ben Yona Sein, an Israeli consultant who runs several online tech sites, including one that aggregates Amazon deals, the retailer was exploring the Israeli market last year. Now, it's trying to promote itself locally.

Israel does not currently host one of the gigantic warehouses Amazon uses to facilitate cheap and fast delivery to customers in the United States and other countries, and many e-commerce experts cited in the Israeli press have dismissed rumors that the company is planning to build one.

But Sein believes the company's recent moves here portend a big change. Online purchases in Israel have been growing by 20 percent each year, according to Globes, and more than $3 billion in VAT-exempted goods are shipped into the country annually. Earlier this year, China Daily reported that Israelis imported some 65 million packages in 2018.

With its increased focus on an e-commerce market worth billions of shekels, Amazon may be "preparing for its next stage" when it opens a fulfillment center-either in Israel or in a nearby country, Sein speculated.

Whether or not that actually happens, Amazon's increased presence in the local market will force local businesses to adapt, said Renana Peres, a researcher at Hebrew University's Jerusalem School of Business Administration.

"The market will have to adapt and change as is already happening, but it'll be on a much larger scale," Peres said. "It won't be the end of local business, it will just change the local market."

There has also been widespread speculation that Amazon is using the increase in orders prompted by free shipping to streamline its local delivery system. Many consumers have complained about lost orders, or the splitting of orders into multiple parcels that wind up at different locations.

But despite these problems, many American expatriates express joy about the new service-not only at saving money, but also at reconnecting to a lifestyle they thought they had left behind.

"Free shipping makes an enormous difference," gushed Judy Segaloff, who moved to Israel from Detroit. "Sometimes I would try to buy something on Amazon and [shipping] would cost more than the item I was purchasing."

"We feel like we are living in [a] small turning point in Israel," said Mordy Rapp, an American immigrant living in Beit Shemesh. "Amazon means access to those American products that we would otherwise never buy."