An encounter with Palestinians 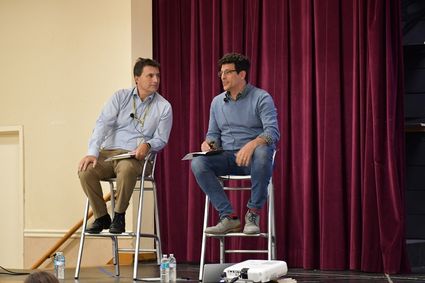 Keith Dvorchik and Aaron Weil share their experiences about the Encounter trip.

During 2019, Keith Dvorchik, CEO of The Roth Family JCC and executive director of the Jewish Federation of Greater Orlando, and Aaron Weil, executive director and CEO of Central Florida Hillel, stepped out of their comfort zones and participated in an Encounter trip to the West Bank (Judea and Samaria). This was Weil's second trip, first as a participant in 2017 and this time as a facilitator. As Encounter explains on its website, this program is an intensive experience in which Jewish leaders are invited "to expand their view of the Israeli-Palestinian conflict and to be a positive force for communal change." Its mission statement says: "Encounter seeks to grow the Jewish community's capacity to contribute to a durable resolution to the Israeli-Palestinian conflict in which all parties live with respect, recognition, and rights."

Dvorchik and Weil shared their experience with an audience of about 75 people at The Roth Family JCC earlier this month.

"It was an incredibly challenging experience," said Dvorchik in an article he wrote for Heritage.

In the meeting he shared his trepidations of going on this trip. "I'm a passionate Zionist and Israel is a big part of family life," he said.

The Encounter trip was his 17th trip to Israel, although the first of this kind. In fact, years ago when he was in Seattle, he was invited on this trip and he thought, "that's crazy! I'd never want to do this!" This time, Dvorchik rethought the invite. He wanted to hear what they were saying and see with his own eyes what was going on from the Palestinian perspective. He wondered, "is there any hope?"

Having already been a participant on a previous trip. Weil said he was excited to have the opportunity to return as a facilitator to help others achieve the same balance of perspective and empathy that he gained from his previous trip. As an American-Israeli who lived in Israel for 11 years and the father of three young adults who live in Israel, he said that he felt that committing to the process of listening to the various Palestinian voices involved in the conflict was an important step in coexistence.

The program is not designed to show the differences between the Israelis and Palestinians. The attendees were there to listen and learn, not push their own agenda.

Dvorchik and Weil learned how the West Bank is divided: Areas A, B and C.

The Area divisions are not clear-cut borders but are scattered pell-mell throughout the West Bank, creating a Swiss cheese effect, making it impossible to form a Palestinian state without moving Israelis or Palestinians out of any of the Areas.

Depending on where a Palestinian lives determines how much freedom to travel he has. If he lives in East Jerusalem (not under any of the Areas), he can travel anywhere throughout Israel and the territories. If he lives in the other areas, his movement may be limited by various restrictions. If he is a Christian Palestinian (1.5 percent of the population), he has a much easier chance of getting a visa than his Muslim counterparts who are not accepted in many other countries.

Travel for most Palestinians is very time consuming. Often, to get from one place to another can't be accomplished in a straight line. For those who work in Israel, getting to a check point and crossing through can add hours to the commute. A 30-minute drive from one Palestinian village to another can take a few hours because they must travel around the many Israeli towns (called settlements by the Palestinians) springing up throughout the West Bank.

Water is another problem. Israel controls the water that runs underground throughout the West Bank and for various reasons- including political -Palestinian communities experience uneven access to these water resources, resulting in real challenges for them.

In order to build, a permit is required (in Area C) and it can take years to get a permit. Dvorchik and Weil saw an elementary school the Palestinians built in Area C without a permit. It is still functioning. However it may be just a matter of time before it is torn down, only because they did not have a permit to build. (So far, as told to Dvorchik, the Israelis have looked the other way).

The tour group also visited Aida, a refugee camp that was established in 1948. It was originally a tent city, but now the residents are housed in buildings. While the residents of Aida have free healthcare, education and food benefits, the United Nations and the European Union seem to hold them hostage. If a Palestinian moves out of the camp, he can't return and gives up all the benefits to live in an area that allows him more freedom. Dvorchik stated that the Palestinians have to be part of the solution, the U.N. has to go.

There is a vast chasm in the perceptions of the Israelis and the Palestinians. For example, Weil showed a sign that warned of entering an area controlled by the PA. In order to protect Israeli citizens, it is against the law for Israelis to travel to these areas without permission from the military. The sign is offensive to Palestinians because they feel it makes them out to be like dangerous animals.

When the security fence was built, 84 percent of Israelis supported its construction because of its effectiveness in saving lives. Palestinians see it as an Israeli attempt to take their land as it cuts through their communities, interrupting their economy and society. It also cuts them off from some sites that are special to both Palestinians and Israelis. The Palestinians have erected a sign near Rachel's Tomb that says "The Wall here encloses Rachel's Tomb, a holy place, illegally annexed to Israel."

Packed into the four-day trip the men met several Palestinians who shared what their lives were like. They met Alma, who has launched a nonprofit for Autistic children in the Aida Refugee camp; Osama is a "joyous person" even though he had served time in Israeli prisons. He sees the way to the future is not through hate. He has engaged with many Jewish people and learned "they aren't evil." He keeps a kippah in his pocket because he said he never knows when he will get invited to a Shabbat dinner and has even davened with them; Suzanne is an artist who wants to work with Israelis.

They also met Sam-a very intelligent man, very politically connected, very wealthy, charming and scary-whom Dvorchik and Weil expressed a shared sense of trepidation over his calls for a civil rights campaign to be used as a hammer against Israel on the international stage. Dvorchik shared honestly that he felt that some of the Palestinians they met were so filled with hate that they would have shot and killed them given the chance.

However, one of the highlights of the trip, and a ray of hope, Dvorchik said, was meeting Ali Abu Awwad. He is the founder of Taghyeer, a Palestinian nonviolence movement that encourages Palestinians to take responsibility for their future. Awwad gave Dvorchik hope that peace can be achieved between the Palestinians and the Israelis.

At the conclusion of the JCC meeting, Dvorchik and Weil shared their take-aways from the Encounter trip.

"It's a messy situation," Weil said. "It's complex because there are multiple narratives of truth and myth. One of my main takeaways is that just as we are committed to the land, the Palestinians also have an unshakeable connection to the land, and thus it is vital to our combined futures to reach out and better understand one another." 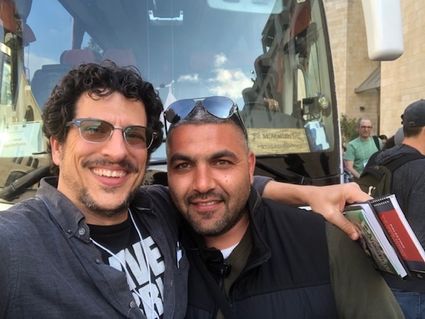 Dvorchik noted that before the Oslo Accords, signed in 1993, there was more cooperation between Israel and the Palestinians. "Oslo altered their lives," he said.

However, Dvorchik shared his hope in the nonviolent movement co-founded by Awwad, who told the Encounter group that the Palestinians must accept responsibility for their own situation. "We've made them (Israelis) afraid," Awwad told them, "until we deal with our own anger."

Dvorchik also shared what Awwad stated he believes are three truths Israelis and Palestinians have in common: "We both have: 1. No place to go; 2. Both histories are connected to the land; and 3. No one else wants us."

"How do we get the Israelis and Palestinians to agree when there are six different opinions coming from each side?" Dvorchik quiered. "It is a challenge."