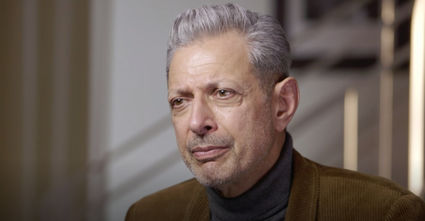 Jeff Goldblum on an episode of "Finding Your Roots."

Titled "Beyond the Pale"-a reference to the Pale of Settlement, the region of what was then Imperial Russia where many Ashkenazi Jews have roots-the episode that aired Tuesday night explored the family trees of actor Jeff Goldblum, NPR host Terry Gross and comedian Marc Maron.

As host Henry Louis Gates, Jr. explained, each of them has "deep Jewish roots," but they all knew next to nothing about their ancestors. Here's a quick breakdown of their individual Jewish histories.

On Goldblum's mother's side, his great grandfather Abraham Temeles left his hometown of Zloczow, a town in the Austrio-Hungarian empire, in the early 1900s because of the rampant anti-Semitism. Historians on Gates' team believe that like many Jewish migrants at the time, he likely traveled 1,000 miles across Europe by train to the Dutch port of Rotterdam, where he boarded a ship for Halifax, Novia Scotia.

The trip wasn't easy. Temeles, who was 50 at the time, likely stayed in steerage for several days during the journey. He traveled on the SS Vulturno, which sunk two years later, killing over 100 Jewish migrants.

"It's just a random piece of luck that I'm here at all I guess," Goldblum said.

On his father's side, great-great-grandfather Zelik Povartzik left his hometown of Starobin, Russia, in 1911, just a year before it was overcome by anti-Semitic violence. In 1941, when the Nazis invaded Russia, they killed most of the remaining Jews in Starobin, wiping a large chunk of Goldblum's family out of the historical record.

The only descendant Gates' team could track down was a second cousin once removed who died fighting for the Soviet army against the Nazis.

"It's moving, it's very moving," Goldblum said as he held back tears at the end of the episode.

All Terry Gross knew about her grandparents' Jewish history was that they all hailed from what they called the "old country."

When she and her parents once visited the United States Holocaust Memorial Museum in Washington, D.C., her father teared up seeing part of a fence from a Jewish cemetery in Tarnow, Poland.

As Gates' researcher discovered, both of her paternal grandparents were born there in the 1880s and immigrated to the U.S. in early 1900s. Each had family that chose to stay, despite the rising anti-Semitism around them.

When Hitler invaded Poland in 1939, Tarnow's Jewish population of about 25,000 quickly found itself cloistered in a ghetto. In 1942, Nazis began slaughtering them-a firsthand account said that the Nazis knocked children's heads against cobblestones and bayoneted adults, killing 7,000 people in days. Most of Gross' relatives from Tarnow disappeared from the record at that point-except for one survivor named Nathan Zeller, who only lived a few more years until his death at the Flossenburg concentration camp in Bavaria.

"It's made everything I know about the Holocaust very specific and concrete," she said. "I always ask myself if it was time to flee, would I know, would I have the courage to leave?"

Maron spent most of his segment expressing shock at the details revealed about his family, such as the fact that his maternal grandmother spent 13 days in steerage on a ship to migrate to the United States before World War I.

"I don't know how they did it... just the idea that you're gonna leave your country, you're gonna pack up, everybody's gonna go... and get on a boat? Are you kidding?" he said at one point. "A boat? I can't be on a boat for an hour without getting sick."

Maron's maternal great-great-grandfather worked in a petroleum factory in Drohobycz, in what was then part of the newly formed republic of Poland. In 1914, at the outset of World War I, Russia invaded the Galicia region of which Drohobycz was a part of. Russian soldiers beat, raped and killed many of its Jews.

Gates traced Maron's father's side back to a great-great-grandfather named Morris Mostowitz, who owned a chain of grocery stores in the Charleston area in the late 19th century. Mostowitz had moved there with a wave of other Jews looking to fill needs for merchants and tradesmen in the wake of the Civil War.

But Morris was no saint-he was involved in at least a dozen crimes, including horse theft and illegal liquor sales, and wound up getting sued by his son Barney over a loan he never paid back.

Maron comically found some similarities in personality between himself and Morris, before ending his segment on a self-reflective note.

"It does resonate, the fact that no matter how religious you are or what makes you a Jew in your particular life, the fact that you are defined on some level in a very real way by the reality of anti Semitism... there's something about that awareness that is still and currently tremendously important," he said.