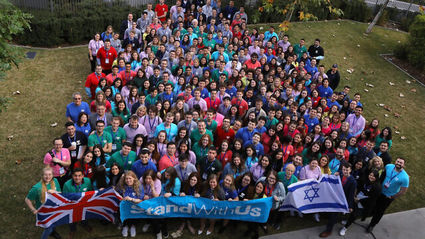 (Jewish Journal via JNS)-Under the banner "Israel in Focus," this year's StandWithUs International Conference focused on educating students about anti-Semitism and how to fight it.

The pro-Israel educational organization's conference was held at the Hyatt Regency Los Angeles International Airport hotel over the weekend, and was sponsored by the Adam and Gila Milstein Foundation.

Addressing the 550 college and high school students and community members in attendance, Israeli-American real estate investor and philanthropist Adam Milstein said anti-Semitism that had been dormant since the end of Holocaust has been making a comeback in the last 15 years.

"The reason why it's so popular in the United States is because it started on the campus and it was permitted on the campus," said Milstein, adding that organizations like Students for Justice in Palestine (SJP) and far-left professors on college campuses have perpetuated anti-Semitism under the guise of criticism of Israel, and anti-Semites are following suit.

If Jews don't fight back, he warned, "we won't have too many Jews here in the United States of America."

At a panel titled "New Trends in BDS on Campus," Rabbi Evan Goodman, executive director of Santa Barbara Hillel, said that while he thinks that the BDS movement is shrinking, it still wields enough influence to affect political leadership on college campuses and instill "cancel culture" in pro-Israel groups like Hillel. Goodman said this was because BDS activists "no longer [want] to dignify other people's perspectives."

SWU executive director of research and strategy Max Samarov similarly said the BDS movement has shifted its focus from getting companies to divest from Israel towards severing ties between people, citing the effort in 2019 to get Pitzer College to end its study-abroad program with the University of Haifa, and McGill University's student government's attempt in December to pressure one of its members to cancel her trip to Israel at the end of the month.

Other panels and speakers discussed how anti-Semitism has become an issue in high schools. SWU executive director of high school affairs Miri Kornfeld said there has been "a rise in the number of swastikas, and anti-Israel slurs and slogans" on high school campuses. It is imperative, she said, that students are educated on the Holocaust and anti-Semitism.

SWU Southwest High School coordinator Kate Chavez said during the "Anti-Semitism in High Schools" panel at its training program for StandWithUs high school interns in August, an incredible 90 percent of the interns raised their hands when asked if they had ever experienced anti-Semitism on campus.

"It was definitely a surprise for us," said Chavez.

Bari Weiss, a columnist for The New York Times and the keynote speaker for the conference, told attendees: "The only way to fight anti-Semitism is by waging an affirmative battle for who we are."

There's still a million Jews who think Israel is divient or profane to Judaism, near all did 1900ad. Most Zionists on campus are Protestant not Jewish 30 to 1. Ensuring Protestant prophecy goes unchallenged on campus isn't the same as saving Jews from harm. Where Jews are safest doesn't flatter zionism.