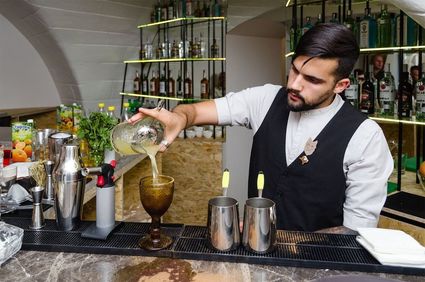 A bartender prepares a cocktail at Kosher Bar in Odessa, Ukraine, Sept. 25, 2019.

For one thing, most drinks served in Odessa's bars are not kosher, limiting his choice to a handful of certified brands.

He also usually doesn't feel "at ease" at a bar.

"A person wearing a kippah just stands out in places like that. Certainly an Orthodox Jewish couple," said Rov, who is 40 and married.

But that changed in August, when Rov attended the opening of Kosher Bar, which its owners say is the first kosher-certified drinking establishment in the former Soviet Union.

"It's a great addition to evening activities," said Rov, who now goes there regularly with his wife on date nights and sometimes with friends on other nights.

The zigzag-shaped marble counter, which is meant to facilitate eye contact between patrons, has 20 seats, and couches accommodate another 15. All in all, the bar's 1,300 square feet of floor space has a capacity of about 100 people and features a patio and a dance floor.

The music selection is eclectic but Jewish, ranging from the Israeli dance rock group HaDorbanim, whose lyrics about the Tel Aviv nightlife scene are anything but chaste, to the rhythmic lamentations of the Hasidic singer Avraham Fried, who delivers his numbers in Hebrew with strong Ashkenazi pronunciation.

On Wednesday nights, the bar is usually packed with members of an informal weekly Torah study group that is led in Russian by Eliyahu Hussid, a local rabbi and standup performer.

On Thursday nights, patrons enjoy homemade kugel along with some of Kosher Bar's native cocktails named after Jews with a connection to Odessa or Ukraine. The Sholem Aleichem (tequila, pineapple juice, lemon and syrup) is named after the famed Yiddish writer. There's also the Meir Dizengoff (a fruity aquamarine concoction based on gin that is served with a frothy top to evoke the Tel Aviv beach) named for that city's first mayor.

Getting a kosher drink isn't a problem in Odessa, a city home to about 40,000 Jews and which has six kosher restaurants, each serving alcohol. Many brands of hard liquor-including vodka, gin and whiskey -are either certified kosher or accepted as such by many observant Jews. Cocktails, however, generally require certification by a mashgiach, a rabbi whose job is to make sure the products and facilities used to make food and drink are kosher.

But a bar that is 100-percent certified kosher, with its own signature house drinks, had never existed anywhere in the former Soviet Union, according to David Roitman, the Ukrainian-Israeli businessman who opened Kosher Bar with his business partner, Shimshon Korits.

There's a good reason why Roitman's experiment hasn't been tried before.

To be certified kosher, the bar must import much of its ingredients from Israel, inflating costs. Kosher Bar is significantly more expensive than most other local bars, with house cocktails costing about $8.50-a pricey luxury in a country where the average monthly salary is about $330.

Additionally, Kosher Bar is closed on key portions of the weekend because of Shabbat, which diminishes profitability. During the academic spring break period, a crucial time for bars and pubs, Kosher Bar's observance of Passover dietary laws means it can serve only some wines.

Kosher Bar does not have much of a captive clientele, either-of Odessa's 40,000 or so Jews, most of them are not observant. The business relies on a mix of local Jews, Israeli and Jewish tourists, and non-Jewish tourists "searching for an authentic experience" in a city where the population was about one-third Jewish before the Holocaust, Roitman said.

Roitman also hopes the bar will appeal to non-Jews through a high standard of service. Top Israeli barmen helped train the staff for weeks before the launch.

Still, "the financial bottom line is a bit complicated," Roitman conceded. He declined to say whether the establishment is profitable, saying that will only become apparent later this year.

"But we took the risk for the sake of doing it," said Roitman.

Roitman regards Kosher Bar as a pilot for a model he hopes could be implemented across the former Soviet Union, which is home to approximately 500,000 Jews.

"This is not just a bar but a community institution. A wholesome place you and your friends can bring your kids after a simcha [celebration]," he said. "I think it can really make a difference."

For now, Roitman says if the bar just covers its own overhead and opening costs, "dayenu"-the Hebrew word for "that would be enough."

Roitman, 40, immigrated as a child to Israel from Odessa, where his family had lived for at least five generations. He said he regards it as a personal duty to help rebuild the community he left behind.

"After the Holocaust, and after Communism, I was the last living person carrying my family's name," he said. "If I hadn't made a Jewish family, it would have been lost to the Jewish people. Some were murdered by the Nazis. Others died as Red Army soldiers. So my coming and opening a bar for the community means a lot."

The owner of several business ventures, Roitman, a 40-year-old father of four living in Jerusalem, can afford to bet some money on a project with limited profitability.

Since 2015, his factory in Odessa, David Roitman Luxury Tallit, has been manufacturing some of the world's priciest Judaica items, including exotic designer yarmulkes made from crocodile, snake and ostrich skins.

"When I was living in New York, I just couldn't believe how some Jews would wear designer suits worth tens of thousands of dollars, and then slap a crumpled rag on their head and called it their kippah," he said. "I decided we could do better and have been moving forward in leaps, baruch hashem," he said, using a Hebrew phrase that means "God be blessed."