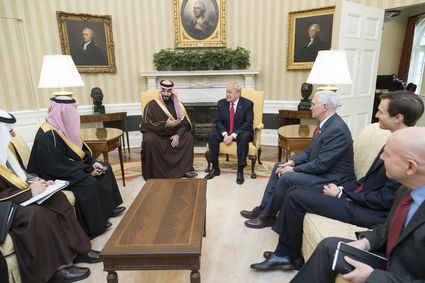 President Donald Trump meets with Mohammed bin Salman, Deputy Crown Prince of Saudi Arabia, and members of his delegation, Tuesday, March 14, 2017, in the Oval Office of the White House in Washington, D.C.

(JNS)-The words were barely out of U.S. President Donald Trump's mouth-and the much-anticipated peace plan to resolve the century-old Israeli-Palestinian conflict for good was barely uploaded to the White House's website-when the doomsayers and naysayers launched their attacks, mocking nearly every aspect of the proposal and condemning it to failure. But the three Muslim ambassadors in the East Room-from the nations of Bahrain, Oman and the United Arab Emirates-stood quietly, their silence understood as tacit support. Indeed, the cause of Palestinian statehood is no longer the unifying rallying cry across the Arab world that it once was.

Speaking with JNS just before the plan was revealed, Joshua Krasna, an expert on strategic and political developments in the Arab world at the Jerusalem Institute for Strategic Studies and a senior fellow in the Foreign Policy Research Institute, correctly predicted that Bahrain would be more supportive of the plan then, say, Saudi Arabia.

Egypt's response was surprisingly positive when some assumed that it would not say very much at all. In a statement it released shortly after the initiative was revealed, it said it "appreciates the continuous efforts exerted by the U.S. administration to achieve a comprehensive and just settlement of the Palestinian issue, thereby contributing to the stability and security of the Middle East, ending the Palestinian-Israeli conflict."

Egypt called on Israel and the Palestinians to "undertake a careful and thorough consideration of the U.S. vision to achieve peace and open channels of dialogue, under U.S. auspices, for the resumption of negotiations..."

While some media outlets reported "muted" responses and even loud objections from Arab and Muslim countries, the reality seems to be the opposite.

Krasna also correctly predicted that the Jordanians "will react badly."

Jordan's King Abdullah II explicitly voiced his rejection of the plan two days before it was revealed. "Our position is very well known toward the so-called 'deal of the century.' The word 'no' is clear to everyone," he said.

Abdullah Swalha, founder and director of the Center for Israel Studies in Jordan, told JNS that the king's objection notwithstanding, "Jordan, as most of the moderate Arab states, is reluctant to criticize the Trump deal, but at the same time doesn't embrace it."

As such, the Jordanian ambassador in Washington reportedly declined an invitation to attend the White House ceremony.

"Jordan will react to the plan specifically after coordinating with Egypt and other Arab countries," said Swalha. "Jordan will adopt the strategy that maximizes the advantages of the plan, such as the status of the holy places, as mentioned in the plan, in addition to its position as a key actor in fighting terrorism in coordination with the U.S."

"The other aspect of Jordan's strategy," he added, "is to minimize the losses or disadvantages of the plan through not clashing with the Trump administration, by separating the peace deal profile from its normal relations with the U.S., which is based on economic and security cooperation."

'The new normal under a new U.S.-Israel understanding'

In a phone call arranged by the Jewish Institute for National Security of America (JINSA), David Makovsky told JNS that he is concerned about the plan and expressed reservations that it would work.

The Palestinian's signature policy was always defiance," he said. "I am not betting on the Palestinians at this time to say 'yes.' "

According to Makovsky, two elements are driving the administration.

The first is that this plan serves as "a reference point for the future."

"This is a reset," he said. "And if Trump is re-elected, [Palestinian Authority head Mahmoud] Abbas or his successor will acquiesce to this new reality."

The second element, according to Makovsky, is that the Trump administration is saying to the Palestinians, "we are giving you the chance."

"This is the new normal under a new U.S.-Israel understanding," added Makovsky. "The questions of who wins the next election in the U.S. might impact whether this [plan] really is a reference point or not. If Trump wins, that will be the new normal."

He warned, however, that if Trump doesn't get re-elected, "this might not be the reference point for the next administration."

Makovsky said that by giving the Palestinians four years to prove that they are capable of becoming a recognized state, the ball is now in their court to discuss the points of the plan and to seriously consider whether to accept it or not. "I hope they use that time to try to have these conversations," he said.

Krasna noted that past Saudi support of the Arab Peace Initiative-a 2002 Saudi-led proposal that called for Israel's full withdrawal from the disputed territories in exchange for normalization with Arab world-as a starting point,as well as previous remarks by King Salman, in which he expressed support for the Palestinians, demonstrates that it may be tougher to get the Saudis completely on board.

However, Saudi Arabia, together with the United Arab Emirates, Bahrain, Qatar and Oman, did express support for the U.S. administration's "efforts," while addressing the plan as a "starting point" for negotiations.

"If the Palestinians strongly reject it, it is hard to believe the Saudis will support it," he said.

On the other hand, given the amount of flexibility towards Israel that Saudi Arabia has shown in recent years, especially with regard to confronting Iran, there are signals that could mean a shift in the Saudi position on the Israeli-Palestinian conflict.

According to Kransa, it could be that Bahrain's support for the plan is a "trial balloon" for the Saudis. If the plan moves forward satisfactorily, it is possible that the Saudis may throw more of their support behind it.