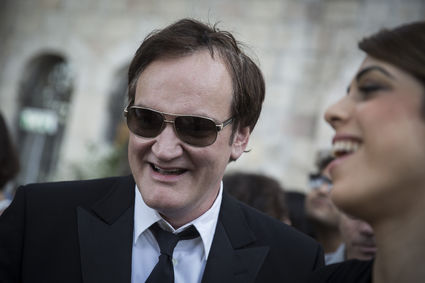 American filmmaker and actor Quentin Tarantino with his Israeli wife Daniella Pick, at the opening night of the Jerusalem Film Festival at the Cinematheque near the Old City of Jerusalem, on July 7, 2016.

(JNS)-Film director Quentin Tarantino spoke to Yediot Achronot in a full-length interview published last week about his new "wonderful" life in Israel with his wife, Israeli singer and model Daniella Pick, who is pregnant with their first child.

The "Once Upon a Time... in Hollywood" director told the publication, "Really, my life here [in Israel] is so wonderful."

He said he has some "short trips" back to the United States planned for the Oscars awards ceremony, but his family will be in Israel before and after Pick gives birth.

His time in Israel so far has been "great" he said, adding, "I love the country, and the people are really nice, very nice to me, and they seem excited that I'm here."

According to Yediot, Tarantino and his wife live in Ramat Aviv Gimel, a tiny residential neighborhood in northwest Tel Aviv.

He is excited about the birth of his child and described his life with Pick-saying they have a routine where he writes, she makes lunch, he writes more, and they watch movies together-and added, "Really, it's very, very pleasant."

When asked how he feels about the missiles fired from the Gaza Strip, Tarantino said, "I'm not scared at all. Like everyone else here, I don't really notice it."

Tarantino just won a Golden Globe for Best Screenplay for "Once Upon a Time... in Hollywood," and in his acceptance speech, he thanked Pick in Hebrew. He said the birth of his child will encourage him to learn more Hebrew.

"I can't have a conversation now, but I know many words in Hebrew," he explained. "Obviously, I'm going to learn. I don't want my boy or girl to speak a language I can't understand."