Time for change among Israelis and Palestinians 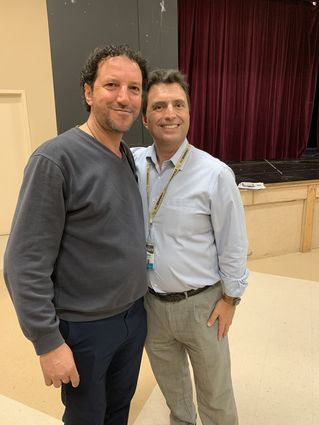 Keith Dvorchik (r), CEO of the Jewish Federation of Greater Orlando and executive director of The Roth Family JCC, with Ali Abu Awwad.

In the past 100 years, there has been an ongoing conflict between Jews and Arabs who claim the land between the Jordan River and the Mediterranean Sea, each as their national homeland. With the creation of the State of Israel this deepened into decades of violent conflict and often all-out war. For the Jewish people Israel was the fulfillment of their need for a sovereign Jewish State and the end of 2000 years of exile and they prepared themselves by all means to fight to preserve this home. But the Arabs saw this State as one that dispossessed them of their rights and overwhelmed them and so by many means tried to fight back. Israel and its supporters often only saw Palestinians and their Arab country supporters trying to end the existence of their State and "drive the Jews into the sea" and cite terrorist attacks, suicide bombings, knifing, shootings as evidence-Palestinians against Israelis and Israelis against Palestinians. The result is always the same: Jewish fear and Palestinian hate. It is a vicious, seemingly unending cycle.

The world has attempted to curb the violence through peace initiatives that have only resulted in more hatred, more fear, more violence.

Former resistance fighter and now a leading peace activist, Ali Abu Awwad sees a way out of this cycle. Awwad is the founder of the peace-building initiatives Taghyeer (Change) Palestinian Nonviolence Movement and the Karama Center. His life and work have been featured in two award-winning films, Encounter Point (2006) and Forbidden Childhood (2008), and he has written his memoir, "Painful Hope: Seeking peace, reconciliation and hope, through nonviolent solutions to conflict" (published in Arabic 2016).

Awwad recently spoke at The Roth Family JCC about the movement and the obstacles to be overcome by both groups.

Through Taghyeer, Awwad is changing the mindset of victimization, hate and revenge among the Palestinian people, in tandem with the Israelis' responsibility to change their mindset of fear and distrust.

"I think peace starts from responsibility on both sides, not from understanding and not from hope," Awwad told the Heritage in an interview shortly before his talk.

The "change" started within himself. He was born in a refugee camp in 1972. His mother was a PLO political activist under Yasser Arafat. Awwad saw her arrested several times. His hatred for the IDF grew as he witnessed the humiliation his mother endured with each arrest.

Twice Awwad was arrested for rock throwing. During his second confinement, he began to study the works of Gandi, Mandela and Martin Luther King Jr. In 1993, he learned the power of nonviolent action through a 17-day hunger strike in order to visit his mother, who was also in prison at the same time. "When we succeeded, it transformed my political mind," he said. "I had been blinded by arguments-about blame, victimhood, punishment and justice. But now I realized that showing my humanity in a nonviolent way was the best weapon to achieve my rights."

Another turning point for Awwad was the death of his brother, Yousef. Unarmed, he was shot in the head by an Israeli soldier at a checkpoint because he argued with the soldier. "My brother wasn't a criminal or a terrorist, he was my best friend..." he recalled. "But taking revenge was not the answer for me. Not because there was a lack of pain or anger but because what I wanted was justice. Yet the only real justice-to have my brother back again-was impossible."

Then Yitzhak Frankenthal, an Orthodox Jewish man asked to visit with his mother at her home. The rabbi had heard of the unjust killing of Yousef. He had also lost his son. Frankenthal brought with him a Jewish delegation of other bereaved parents. "I saw my mother sitting, holding hands with this Jewish mother who had also lost her son, and I knew that if these two moms can sit and cry and hold hands, anything is possible," Awwad said.

He set his course to achieve a peaceful solution to the Israeli/Palestinian conflict that "guarantees individual freedom, dignity and a secure life for all."

How is he going about this? "We are uniting Palestinians around a nonviolent identity that will guarantee development and promote new conditions of life because this anger has to find a place. It's not acceptable-just as the Jewish fear is not acceptable.

"Our way is not to promote hate. Our way also is not to be aggressive and stand against everything. Our way is to change the mind set," he reiterated.

His view of peace for Palestinians is different than peace for Israel.

"Peace for Israel is about security because it is a country. As Jewish Israeli kids go to the Army, they don't see themselves as occupiers, killers, whatever, no. They see themselves as kids going to protect their country. But they are a part of the humiliation of another nation," he explained. "I would never allow my rightness to cause a price of a Jewish person a piece of his dignity. I expect the same from my people."

Peace for Palestinians, he said, is to start living again. "We are breathing, but we are not alive. And when I say 'alive' society, I mean a healthy, secure, functional, independent, democratic, secular society," he stated.

Then he asked a question, "How can you create a democratic state under military occupation? Teach me how to do that. I'm willing."

Awwad often referred to the 'occupation' of the West Bank. He explained Palestinians see themselves in an occupation because the Israeli government controls much of their way of life. In Area C, Palestinians can't build without a permit (which is rarely given); travel from one village to another is often obstructed ("Students often have to walk under protection a mile around a settlement to get to schools."); water and electricity are controlled by Israel.

"I live in a home that sometimes during the whole month we don't have water. We have to buy these big tanks and put them on the roof. And sometimes, the IDF shoot at the tanks, and this promotes anger," Awwad said.

Awwad explained the anger Palestinians feel. "Daily suffering under military occupation promotes so much anger. If you don't adapt that anger and use it the right way, without causing anyone the price of his dignity or life, we're going to keep killing each other."

He continued, "I can blame Israel with a million reasons... but I'm not playing the victim. Why? As long as we keep [playing] the victim role, we victimize each other. Worse than that, we have a competition of suffering. Who suffers more? I'm tired of that."

Israelis have a responsibility to change too

Before founding Taghyeer, Awwad worked with Rabbi Hanan Schlesinger, director of International relations for Roots, a joint Palestinian-Israeli grassroots peacemaking initiative dedicated to understanding nonviolence and transformation. Together they have toured throughout the international community sharing the message of nonviolence.

In an article in My Jewish Learning (Painful Hope, June 26, 2015), Schlesinger spoke of the Jewish peoples' deep-seated fear and shared what he sees as the Israelis' responsibility in this conflict: "We say at the Passover seder 'in every generation they rise against us to annihilate us.' It is as if built into the fabric of Jewish existence as it plays itself out in this universe... It always was like that and always will be, until the era of final redemption. Our conflict with the Palestinian is just one more layer in the age-old Jewish fate. And so we accept it. We grit our teeth and plod on with a certain satisfaction that we are an authentic link in the chain of tradition. We are one with our forefathers, suffering what we are supposed to be suffering.

"But now I see things differently. I see our blunders-and those of the Palestinians... I see the mutual blindness, insensitivity and insularity that are part of this conflict. I see the fear, the competition of suffering and the culture of victimhood that are preventing us from leaving the past behind and working towards a better future."

There are Palestinians who rail against the Jewish State; proclaiming it will be pushed into the sea. They enter Jewish settlers' homes to kill; ambush Israelis out for a day of hiking; kidnap hitchhiking Israelis. Awwad professes that it is the minority of Palestinians who chant the hatred, incite the violence.

Looking this reporter in the eyes, he stated, "I and the Palestinians recognize the Jewish rights to the land."

"Just imagine," he said, "what would prevent us from killing Jewish people every day? With 30,000 Palestinians crossing to Israel every day to work, why don't they blow themselves up? They can... but they don't want to. On the other hand, one suicide bomber can affect the whole public opinion of the Jewish world."

The times they are a changin'

When this conflict started, Awwad said it was to be or not to be, whether the PLO destroys Israel or Israel destroys the PLO. It's not the story now.

"Most Palestinian kids want just to go to university, to have the right of movement... we have to create new models-alternatives. We have to focus on the commonalities between us. Peace for me is to be able to live with our differences."

Many Palestinians agree. In 2016, more than 3,000 Palestinians gathered in Jericho to learn about the nonviolent movement and since then involvement has grown. Awwad refers to the group as the Silent Majority. "The Silent Majority want change, but they have to be involved, to raise their voice. The problem isn't with the minority who disagree. The problem is with the silent majority who want change," he stated.

Awwad is not afraid to enter into dialogue with those who disagree with his philosophy. Awwad stated that dialogue is "the secure place for argument," adding, "as long as we have dialogue we aren't killing each other."

Dialogue alone will not bring peace. It is a stepping stone to what needs to be done for peace. Awwad's vision is to see hundreds of thousands of people coming together to force the political leadership to sit and find a solution that "two truths"-Israelis and Palestinians-can live in the land with dignity and freedom.

However, Awwad said that before they can speak about co-existence, they need to create a new environment. "Our vision is very clear-an environment that will guarantee independence, security and dignity for all."

How will that happen? According to Awwad, change the mindset. Taghyeer is building a grassroots movement by equipping hundreds of emerging Palestinian leaders and activists to build trust through a nonviolent identity.

There are 13 geographic areas around the West Bank that are working with the core community organizers in Taghyeer leadership to strengthen the nonviolence charter within Palestinians society.

The Friends of Taghyeer Movement in the U.S. welcome your involvement in this initiative. Specifically, they are looking for legal and 501c3 organizational development assistance, fundraising expertise, website development/social media assistance, and partners to build a board as they consider 501c3 status.