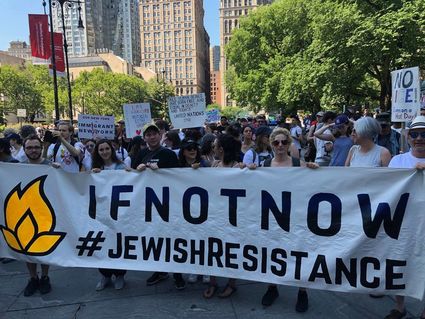 IfNotNow supporters at a rally in New York City.

(JNS)-The anti-Israel group IfNotNow approached the leading Democratic presidential candidates in New Hampshire, ahead of the state's primary on Tuesday, to ask if they will skip the annual AIPAC Policy Conference next month-only to get one commitment so far.

That commitment was from Sen. Elizabeth Warren (D-Mass.), who relayed her decision via an answer to a question by a potential constituent at a town hall in Derry on Feb. 6.

"I'm an American Jew, and I'm terrified by the unholy alliance that AIPAC is forming with Islamaphobes and anti-Semites and white nationalists. And no Democrat should legitimize that kind of bigotry by attending their annual policy conference. I'm really grateful you skipped the AIPAC conference last year, so my question is if you'll join me in committing to skip the AIPAC conference this march?" asked an IfNotNow activist named Sarah, who also asked Sen. Bernie Sanders (I-Vt.) the same question at a town hall in the same town the day before.

Tonight, Elizabeth Warren nodded along and smiled as a questioner slandered AIPAC as "an unholy alliance" of "Islamophobes," "anti-Semites, and white nationalists" that perpetuates "bigotry"

Without blinking, Warren then agreed to boycott next year's AIPAC conference.

"The way I see this, is that for America to be a good ally of Israel and of the Palestinians, we need to encourage both parties to get to the negotiating table," said Warren.

Sanders said he would have "no objection to going."

"Mr. Vice President, Elizabeth Warren just committed to skipping AIPAC earlier this week which is a right-wing lobby that pours millions of dollars to defeat, and then to end the Iran Deal that you worked so hard to pass. Will you join her in committing to skip the AIPAC Policy Conference this year?" asked the same IfNotNow activist named Sarah.

Biden responded, "No, because I'm there to convince."

The activist asked, "Convince of what?"

"Convince them to change their position," replied Biden.

Instead he's going to "convince them to change their position."

Biden's strategy that he'll change AIPAC with a speech is as laughable & dangerous as his belief that he will be able to work with McConnell on bipartisan legislation.

"I haven't made any scheduling decisions about that," he responded, adding "I don't even know when it is."

"Israel's decades-long occupation has eroded the bipartisan consensus on Israel and AIPAC, in a last-ditch effort to maintain influence, now anchors an unholy alliance with antisemites, Islamophobes and white nationalists," said IfNotNow co-founder Emily Mayer in a statement.

"This unholy alliance shields the Israeli government from any consequences for its actions and pushes for a blank check that has had disastrous effects for both Palestinians and Israelis," she continued. "No Democrat should give AIPAC political cover with their presence."

The AIPAC conference will be held in Washington, D.C., on March 1-3, with the last day being Super Tuesday, where the greatest number of states hold primaries and caucuses.

"We would like to sincerely thank IfNotNow for showing American Jews just how out of sync the Democrats' presidential candidates are with mainstream Jewish values," RJC spokesperson Neil Strauss told JNS.

The Jewish Democratic Council of America refuted RJC and, without calling out IfNotNow by name, said that it's unproductive for groups pressuring the candidates to skip AIPAC.

"We have said it before and we'll say it again-it's not productive for outside groups to seek to create divisions between Democrats on Israel when they don't otherwise exist," JDCA executive director Halie Soifer told JNS. "We will be participating in AIPAC Policy Conference and know many Democrats will attend as well."

Protester removed from the crowd

In related news, IfNotNow interrupted a Cops for Trump event in New Hampshire on Monday featuring U.S. Vice President Mike Pence, who was interrupted when he began speaking with chants of "Trump endangers Jews!"

The three IfNotNow activists held up a sign that was snatched by a fellow attendee, and they were forcibly escorted from the event.

"Our community is terrified of the white national violence you are inciting," a protester shouted as they were being forcibly removed from the crowd.

Last year, IfNotNow approached Democratic presidential candidates as representatives of the Jewish community and asking them about ending the so-called "occupation" of the West Bank.

"Yes, yes. So I'm there," responded Warren swiftly, followed by taking a picture with the activists.

Despite defining themselves as a "progressive" group "grounded in the values of the Jewish tradition," many observers see the organization as outside of the mainstream.

"IfNotNow officially isn't against the BDS Movement and doesn't take a position on whether Israel has a right to exist or, for that matter, Zionism," former National Jewish Democratic Council head Aaron Keyak told JNS. "Given the primary calendar, if a candidate doesn't have time in their busy schedule to attend Policy Conference, I get that, but IfNotNow is a fringe organization that doesn't represent anything close to the opinion of Jewish Americans."

According to its mission, IfNowNow seeks to "end American Jewish support for the occupation," which advocates say is "is a system of violence and separation by which Israel denies Palestinians freedom and dignity by depriving them of civil, political and economic rights."

The term "occupation" initially applied to Palestinian areas the Israelis oversaw after gaining land (eastern Jerusalem, the West Bank, the Gaza Strip, the Golan Heights and much of the Sinai) in the 1967 Six-Day War-land the Arabs refused to negotiate as part of the Khartoum Conference in 1968, signified by "Three No's" in reference to Israel: no peace, no recognition, no negotiations.

Ever since then, the word has been used by anti-Israel groups in the attempt to delegitimize Israel. Yet as with most terminology used in the Israeli-Palestinian conflict, no clear definition exists, even after the Palestinian Authority has overseen Arab-majority sections (known as Area A under the Oslo Accords) of the West Bank since 1994 and Hamas has run Gaza since 2007 (taking it away from the P.A. after Israelis withdrew in 2005). Egypt negotiated with Israel to get the Sinai back in 1982 as part of direct negotiations with Israel.

Still, some consider all of Israel to be "occupied" territory.

"We understand the occupation as the military rule over Palestinians in the West Bank, East Jerusalem and Gaza," IfNotNow spokesperson Yonah Lieberman previously told JNS. "We also know that the discrimination and displacement inside Israel's 1948 borders are connected to its rule in those Occupied Territories. This system of violence deprives all Palestinians of civil, political and economic rights."