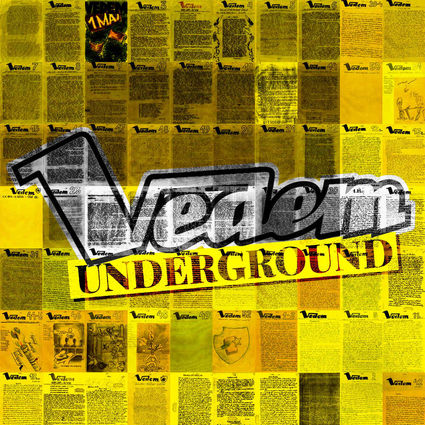 MAITLAND, FL—The Holocaust Memorial Resource and Education Center of Florida is honored to feature Vedem Underground: The Secret Magazine of the Terezin Ghetto (1942-1944) from Jan. 13 through April 3, 2020. “Named one of the Smithsonian’s 10 “Don’t Miss...” new exhibits for Winter 2017, Vedem Underground, produced by the Vedem Foundation, is an art installation that deconstructs and reinterprets the literary work of the teenage Jewish creators of the longest-running underground magazine in a Nazi camp. From 1942 to 1944, Vedem (“In the Lead” in Czech) chronicled life within the walls of Czechoslovakia’s Terezin Ghetto, and was a symbol of protest, rebellion and creative activism by some of the era’s youngest resistance fighters. Inspired by Vedem’s invaluable lessons about the necessity of free speech and the dangers of propaganda and censorship, the exhibit premiered at the Simon Wiesenthal Center’s Museum of Tolerance in Los Angeles in 2016, and has since been presented in cities such as Atlanta, Austin, Dallas, Houston, Sacramento and Portland, Oregon.

Using a combination of pop-art graphics, archival photographs and cartoons, as well as the prose and poetry created by the magazine’s contributors, Vedem Underground celebrates the artistic and cultural legacy of Vedem by breaking down its 83 weekly issues totaling 800 pages, then reconstructing them in the form of a contemporary magazine.

Vedem Underground was produced and curated by Rina Taraseiskey, whose grandfather led the resistance at Lithuania’s Kovno Ghetto, and who is also co-writing the companion book Vedem Underground: Pages of Resistance and producing the Vedem Underground documentary film with an Oscar- and Emmy-award winning team; Los Angeles-based art director Michael Murphy, who conceptualized the exhibit as a merging of punk subculture-inspired art and the 1940s-era ‘zine aesthetic; and Dallas-based writer and journalist Danny King.

Vedem Underground was the winner of the 2016 WORD Grant: The Bruce Geller Memorial Prize, a project of American Jewish University’s Institute for Jewish Creativity. The exhibit has also been generously supported by the Jewish Community Foundation of Los Angeles. Other support for the project comes from Steven Spielberg’s Righteous Persons Foundation and the Ziering Family Foundation.

Additional details on this program, can be found at https://www.holocaustedu.org/event/vedem-underground.