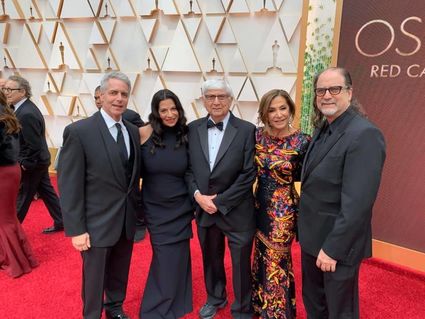 Craig and Marla Stone (l), Bob Weiss (center), Glenn Weiss (r) and his wife, Jan Svendsen on the Red Carpet at the Oscars.

I read this recently and share it with you:

"Anti-Semitic graffiti was found on more than one hundred gravestones in the Jewish cemetery of Westhoffen in eastern France. The case came to light after similar desecration was reported that same day in the nearby commune of Schaffhausen-sur-Zorn.

The region of Alsace has suffered from a recent surge in anti-Semitic and racist graffiti.

In Bas-Rhin, 96 graves in the Quatzenheim Jewish cemetery were stained with anti-Semitic tags and racist and anti-Semitic graffiti were discovered on the walls of the town hall of Dieffenthal. Additional gravestones were vandalized in Herrlisheim, northeast of Strasbourg.

Anti-Semitic writings were also discovered in front of a school in Strasbourg and swastikas were painted on the walls of an old synagogue in Mommenheim.

Across the region, several city halls and government buildings have also seen hateful messages scrawled across their exteriors.

French affiliate the Conseil Representatif des Institutions Juives de France tweeted that he was 'deeply shocked' by the desecration of the gravestones in the Westhoffen Jewish cemetery. 'This cowardly act is a terrible expression of daily anti-Semitism. The perpetrators must be punished in accordance with the gravity of their act,' he said.

France's Interior Minister CHRISTOPHE CASTANER also responded in kind, calling the acts 'repugnant' and 'an insult to the republic.' He vowed a proper investigation and response by relevant law enforcement agencies.

Upon visiting the Westhoffen cemetery, Castaner announced the establishment of a special unit within the country's Gendarmerie to combat hate crimes and coordinate responses to attacks on freedom of thought and religion."

(I can't accept this! I need some good news for a change!)

The WJC hosted a special gathering in honor of the Pacific Island States for their long-time support of the Jewish people and the State of Israel at the United Nations.

The conversation between WJC representatives and ambassadors from the Pacific Island States focused on this lasting friendship and how it can be strengthened even further.

The Pacific Islands are among the first to bear witness and suffer from the consequences of climate change.

The ambassadors also offered a stark reminder that global warming endangers us all and must be a concern. The ambassadors took this opportunity to reaffirm the strong commitment of their respective countries to the Jewish people and the State of Israel. They conveyed that it was out of a deep sense of shared identity that they will continue standing in solidarity with Israel at the United Nations, including with their votes on the plethora of resolutions targeting the Jewish State each year.

While he and his lovely wife, RISA, were watching the Oscar presentations on television recently, they spotted their niece, MARLA STONE and her spouse CRAIG, of Chicago, Illinois, on the Red Carpet runway!

Marla's uncle, GLENN WEISS, was with them. Glenn is an Emmy award-winning director and producer of television and live events from New York. What a thrill!

(I intend to repeat this at a later date.)

On Sunday, March 29th, the terrific JEFF RUPERT Quartet, consisting of Jeff on saxophone, RICHARD DREXLER on piano, BEN KRAMER on bass and MARTY MORELL on drums, will be appearing at the Altamonte Chapel 825 East Altamonte Drive, Altamonte Springs.

Our own wonderful ALAN ROCK is emcee.

(Through the years I've had occasion to work with these guys separately, here in Florida and also in New York City. They are super-talents! Also, the second set is always open to musicians (bring your axe) and singers. This promises to be one terrific show!)

(I will repeat this nearer the date)

On Thursday, March 12th, 10 a.m. at beautiful Lake Lily Park in Maitland, it will be a Purim-themed story time and Baby & Me Yoga.

The meeting will be on the south side of the lake, opposite the playground. (Follow the pedestrian bridge running alongside 17-92) Also, don't forget to bring your yoga mats!

PJ Baby & Me was created especially for babies and toddlers, ages 0-3, and their special person (parent, grandparent, caregiver, etc.)

Admission is free. However, space is limited so pre-registration is required.

At 1 p.m. (unless otherwise noted), there is a weekly meeting and program, followed by complimentary refreshments and social time. All 39ers and JCC members are welcome to attend.

It takes place in the Senior Social Lounge of the Maitland Jewish Community Center.

I was moved to tears and laughter, sometimes both together!

I'm referring to the JCC39ers program recently, hosted by our wonderful SHELDON BROOK.

It was called "A Jewish Legacy" part A, referring to Broadway musicals and the wonderful Jewish composers and lyricists that gave us the legacy.

It ran a little longer than usual but nobody wanted it to end... and so it didn't! Thank you, Sheldon, for bringing it in to entertain us.

Also, thank you, Sheldon, for telling me about it! It turns out that I own my own copy of A Jewish Legacy, parts A & B. My late husband must have bought it about five years ago. I never even opened it! But now, thanks to Sheldon, I will watch it over and over again!

Ruth takes one look inside her 10-year-old son Daniel's bedroom and immediately goes downstairs to confront him. "Daniel," she says to him, "I thought you told me that you had thoroughly cleaned your room. I've just taken a look at it and it's still a big mess. What have you got to say about it?"

"I really don't know why you're making such a fuss, mom," Daniel replies. "After all, I never actually told you my room was clean." 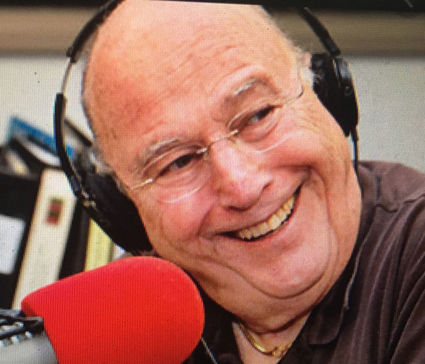 Ruth can't help but smile. "OK smarty pants," she says, "I should have remembered that you want to be a lawyer when you grow up. You're obviously going to make a brilliant lawyer."