This engagement is absolutely bashert!

Marissa's and Andrew's bat and bar mitzvah announcements in the March 31, 2006 issue of the Heritage.

When the bar mitzvah announcements of Andrew and Eric Lopez, twin sons of Ed and Linda Lopez of Winter Park, were published in the March 31, 2006, issue of the Heritage, Linda kept the paper with plans to frame the announcements. The newspaper sat on top of her dresser bureau for years, turning yellow with age.

Time went on. Their son Andrew attended UCF, majoring in music and education. In January 2014, he attended a Florida Music Education Association development conference in Tampa and met Marissa Kotzin, daughter of Kurt and Paula Kotzin of Orlando.

Marissa was attending FSU, also studying music and education. They started dating and learned they grew up near each other-Andrew's family was members of Congregation of Reform Judaism and Marissa's family lived in the Dr. Phillip's area and attended Southwest Orlando Jewish Congregation.

Eventually, it became evident that they were getting serious and as they planned to attend a Birthright trip together, the couple's parents met.

In the Jewish vocabulary there is a word for predestined or fated. That word is bashert. It is often used when two people are "made for each other." This seems to be the case for Andrew and Marissa.

About two years ago, Linda said, her husband suggested she get rid of that yellowing newspaper on her dresser that she was "going to frame one day." She picked it up while cleaning and looked at it. 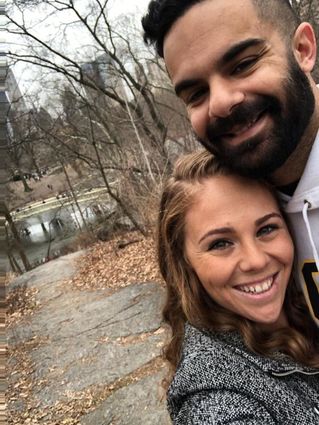 Along with their sons' announcements were two others. Linda looked at Marissa's picture and then noticed her full name. "I never knew her middle name!" she said as she stared in shock at the bat mitzvah announcement of Marissa Morgan Kotzin-the girl Andrew planned to marry-right above her son Andrew's announcement.

"I guess you'd say I was freaking out," she said as she realized that Andrew and Marissa were called to the Torah as bar/bat mitzvahs on the same day at probably the same time.

Linda immediately called Andrew and sent a photo of the announcement.

And now, 14 years since the b'nai mitzvah, their parents announced in September 2019 the engagement of Marissa Morgan Kotzin to Andrew Barnet Lopez.

A December 2020 wedding is planned.