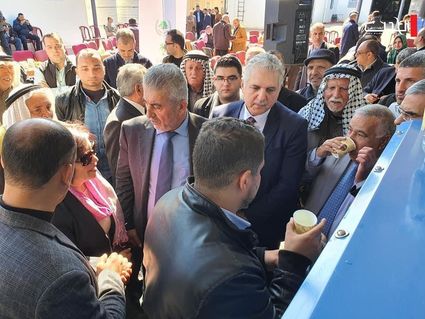 People enjoying a glass of fresh water generated by the GEN-M machine placed in Gaza.

(ISRAEL21c)-Israel-based company Watergen has begun supplying water to a Gazan neighborhood via its water-from-air machine that can generate up to 800 liters per day.

Gaza suffers from a rapidly depleting water supply. Its main source of water is its coastal aquifer, which has been over-extracted in recent decades. The reduced water levels have resulted in saline water seeping in, further polluting the water in the aquifer-with the result being that 90 percent of the water is not fit for consumption.

The GEN-M unit will provide the Gazan neighborhood with an inexpensive method to acquire freshwater. It requires no special infrastructure except for electricity, in this case from solar panels.

Watergen's technology creates water by cooling collected air at its dew point. The water then goes through physical, chemical and biological treatment followed by a mineralization process to ensure its cleanliness and taste.

The GEN-M unit was placed in Gaza as a result of cooperation between Watergen, Israel's Arava Institute for Environmental Studies, the Palestinian NGO Damour for Community Development and the Abasan al-Kabira municipality.

"Responding in accordance with our belief that every human being, regardless of race, gender or religion has a fundamental right to clean drinking water, we are helping some of Israel's next-door neighbors gain access to fresh water, a resource that is lacking in Gaza," Watergen said in a statement.

"We hope that our provision of an AWG will help solve the water crisis and serve as a step forward towards mutual collaboration in the Middle East."