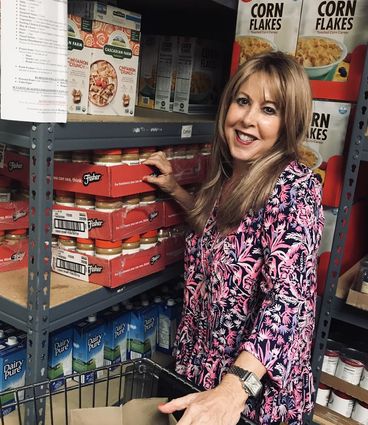 "I think it's a privilege to work in the Pantry," said Sandy Weiss, who has volunteered with JFS Orlando since 2018, first as a RAISE coach and now as a full-fledged Pearlman Emergency Food Pantry volunteer. "I helped somebody with the RAISE (Recognizing Abilities & Inclusion of Special Employees) program here and I got to know the job description. So it just evolved." Weiss has always had a big heart and a love for helping others.

Before moving to Orlando from NYC 48 years ago, Weiss started her career in teaching. "I taught elementary school-4th grade mostly. I was a teacher for 28 years!"

While teaching, Weiss and her husband raised their two sons in Maitland, and their family has now grown to include five grandchildren, some living in the area and some in Charlotte. Now retired, Weiss enjoys volunteering with RAISE and with JFS Orlando's Pearlman Emergency Food Pantry.

"When I say I volunteer at the Pantry, people's eyes light up. It just seems magical because it's something that everybody is for-it's not this thing or that thing, what people believe or not-we're feeding and helping the world. And people are hungry!"

Weiss notes how the people who come to the Pantry are always so grateful and almost a little embarrassed; they've just fallen on hard times. "These are people who are reasonable and they are reaching out. Working here grounds me and it helps me understand more of what's behind the four walls of our lives. It just shows you that there is another world-you know about it, but when you actually see it, you just become so grateful."

There have been many moments from working in the Pantry that have left an impression on Weiss, but one particular one stands out the most: "One gentleman came, 20 or 22-years old. That day we had a lot of produce and it was all over-flowing. I opened up the door and his eyes widened. He said, 'Wow...I haven't eaten in three days.' Luckily we had a few bars to hand him. And at that time also, he had no way to get his food home. I said 'How did you even find us?' He said 'I guess when you're hungry.' He had gone on the computer and he found us. He said 'I promise I'm a really good person and I don't do this kind of thing normally. I'm waiting and I had an interview with Taco Bell.' All he wanted was a job at Taco Bell..."

Weiss had always wanted to volunteer at the Pantry and, now that she does, she wishes more people would support it too.

"I just think people really don't know. They know it's a pantry and they say 'Oh, that's wonderful,' but they really don't know. It's a very happy and fulfilling place. It fills your heart with positivity in a world that is full of so much negativity. Volunteering at the Pantry is something that you can do that's positive. It makes you happy and you're putting a smile on someone's face."

The JFS staff appreciate all that she does for the people they serve and they love having her on the JFS Volunteer Team! Collectively saying, "You put a smile on our faces, Sandy. You are such a sweetheart and you provide such a warm, bright presence to everyone that comes up to the Pantry door."

Interested in helping your community by volunteering with JFS? Several roles are currently available, including helping out in the Pantry and behind-the-scenes office assistance. To sign up, contact us at 407-644-7593 ext. 249 or Audrey.Cohen@JFSorlando.org.

Established in 1978 as a non-profit human service agency, Jewish Family Services of Greater Orlando (JFS Orlando) provides social programs and services to children and families of all faiths in the Central Florida community. JFS supports efforts to prevent hunger and homelessness as well as providing mental health counseling to those in need. For more information on JFS and its programs, please visit http://www.JFSorlando.org or follow them on social media @JFSorlando.