55,000 students miss school as rockets rain down on southern Israel 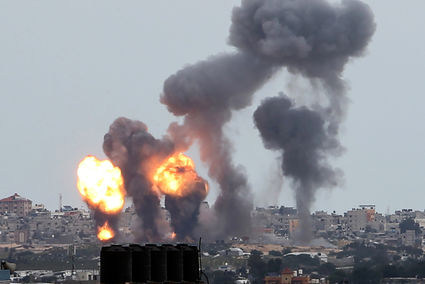 A ball of fire and smoke rises above buildings during Israeli airstrikes in the southern Gaza Strip after a slew of 14 rockets were launched towards southern Israel, on Feb. 24, 2020.

(JNS)-At least 14 Palestinian rockets rained down on southwestern Israel on Monday, with one striking and damaging a playground in the town of Sderot and another shattering a car windshield in Nir Am.

Twelve of the rockets intercepted by Israel's Iron Dome air-defense system, according to the Israel Defense Forces. The rocket fire was a continuation of Sunday's attacks, which saw some 30 projectiles launched at Israel. The attacks were claimed by Palestinian Islamic Jihad (PIJ).

Iron Dome is only activated when an incoming missile is predicted to be heading towards a populated area.

Due to the Sunday night attacks, the IDF on Monday morning had already ordered closures of areas and roads adjacent to the Gaza border fence, as well as Zikim Beach between Ashkelon and Gaza.

Israelis were allowed to go work as usual, provided that shelters were immediately available.

Israel responded to the attacks by launching airstrikes on PIJ sites in both the Gaza Strip and Syria, reportedly killing two members outside Damascus and another four pro-Iranian militants.

"IDF fighter jets struck terror sites belonging to the PIJ terror group south of Damascus in Syria, as well as dozens of PIJ sites throughout the Gaza Strip," the IDF said in a statement.

According to initial reports, the IDF apparently did not target Hamas sites.

Israeli Prime Minister Benjamin Netanyahu told Radio Jerusalem on Monday morning that Israel might have no choice but to launch a major military operation, bigger even than 2014's "Operation Protective Edge."

"If Israel is in the position of entering a large-scale military operation, we will have to deal a bigger blow than 'Cast Lead,' 'Pillar of Smoke' and 'Protective Edge,' " he said. "It could very well be that we may have to carry out-I don't really want to say it, but 'the mother of all operations.' "

The rocket fire comes after Israeli troops killed two Gazans on Sunday who were attempting to plant a bomb along the Israel-Gaza border. Video uploaded to social media showed IDF troops using a military bulldozer to retrieve the terrorists' bodies, under a hail of stones from Palestinian rioters. The Israeli military argues that the bodies of terrorists can be used as bargaining chips in negotiations with Gaza terror organizations, which currently hold two Israeli civilian hostages, along with the bodies of two IDF soldiers.

"I am sick of the hypocritical left-wing criticism of the 'inhumanity' of using a bulldozer to bring us the body of a terrorist who tried to murder (!) Israelis," Israeli Defense Minister Bennett wrote on Twitter.

"Hamas is holding the bodies of [fallen soldiers] Hadar Goldin and Oron [Shaul]," he said. "I back the IDF [forces] that killed the terrorists and collected the body. This is how we should and will act."