For the 3,500 teens at the annual BBYO convention, the world needs their help 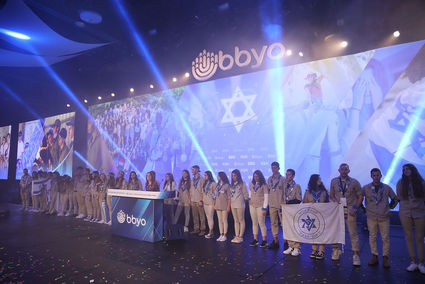 (JNS) DALLAS-Seventeen-year-old Swedish climate-change activist Greta Thunberg was not at BBYO's International Convention here last week, but when her name was mentioned, throngs of teenagers applauded and screamed as if she was.

That's because climate-change activism was as much of a theme of the four-day conference as the official one "Tomorrow Happens Here."

Avi Garbow, environmental advocate for the sportswear line Patagonia who received the annual STAND UP Award on behalf of the company, said Greta may be a rock star to them, but there are more just like her.

"You are the first generation to feel the impact of climate change and the last to do anything about it. Before Greta there were others, and after Greta there will be others," he told the crowd of nearly 3,500 teenagers.

Organizers estimate drew the convention drew a 5,500 people from 45 countries, including Cuba and Norway, for leadership-building workshops, community-service projects, meeting fellow activists and even to play the latest video games on cutting-edge technology. During that period, they heard from a roster of renowned activists, journalists, celebrities and, in one somber moment, watched Holocaust survivors embrace for the first time liberation soldiers.

Themes and issues change every year, which the organization's staff remains aware of, said CEO Matt Grossman. "This generation has lived through an era of school shootings," he said, noting that the convention was held in Orlando, Fla., only a few days after the two-year anniversary of the deadly shooting at Marjorie Stoneman High School in Parkland, outside Miami. That year, the issue became safe schools, resulting in a global initiative related to school safety.

But climate change, he said, "is the issue of the time."

'We have a voice'

Claudia Sachs of eastern Virginia has been involved with climate-change activism, participating in school strikes, a worldwide series of strikes and walkouts advocated by Thunberg in 2019. Students walked out of school, demanding political movement on combating climate change.

"We have to ensure that our only home is safe for future generations. This has become a very personal passion for me, like it has for so many of us," she said.

Her passion led her to steer the BBYO Climate Crisis Task Force, which will soon join the International Leadership Network, an alliance of organizations for youth. The membership, she noted, "will position BBYO on the forefront of combating global change."

Andrew Goldberg, publicist for his BBYO's Connecticut Valley Region chapter, is energized by the chance to expand BBYO's already broad set of issues.

"In a society plagued by an onslaught of issues across a wide spectrum, the environment is one area that failure will wreak havoc on. If we fail to take action, the future generations of all species will be faced with a threat to their survival," he said. "In BBYO, we are granted the opportunity-time and time again-to collaborate with one another, debate vital issues we face and seek solutions. BBYO is there to remind us that we have a voice, and that our voices matter-not just to each other, but to everyone in the world in which we live."

Sachs and Goldberg's willingness to confront with confidence a complex issue involving the scientific, political, governmental and other communities is the core of the BBYO experience, said CEO Matt Grossman.

"The workshops are rooted in confidence and growth of young people; the programming is tied to social issues. Groups serving Jewish teens are progressive, but the meaning of inclusivity has expanded. We explore this with teens, all in a safe environment," he said.

Each presentation is presented in a way to stimulate curiosity. The plenaries-a cross between a TED talk and a concert-use digital graphics, sound and theatrical devices to amplify the voices of activists, who included Cornell Brooks, director of the Social Justice Collaborative at Harvard University and former CEO of the NAACP; Zach Barack, a transgender actor; and Sakena Yacoobi, CEO of Afghan Institute of Learning.

"That roster is telling of what we've become," said Grossman, noting the diversity of speakers.

'Engaging with other teenage activists'

In the past five years, the programming has become more globally focused, too. The planning committee is made up of 300 teenagers, not all of whom speak the same language. To organize across time zones, they had to creatively use smartphone applications like WhatsApp, which offers translation services. Working across time zones required keen awareness of customs, traditions and the time of day that could best work for the large committee.

Emily Kolodney of Austin enjoyed the challenge. Granted, she could not avoid the responsibility. She is the 75th Anita M. Perlman International N'siah of BBYO's B'nai B'rith Girls sorority, a leader during a milestone year for the organization. She serves alongside Ethan Golde, the 95th Grand Aleph Godol of the boys' fraternity Aleph Zadik Aleph. The duo is responsible for working with the organization's 730 chapters in 53 countries, and also collaborates with chapter and council operations.

"But they're still teenagers," noted Debbie Shemony, vice president for marketing and communications. And alongside civil-rights figures and journalists are celebrities and YouTube stars, who have become increasingly popular among this demographic.

Adding they don't bring in just any YouTube star, Shemony said "we see they really like engaging with other teenage activists who also have big dreams."

The programming is also more inclusive than in years' past, with country-specific meet-ups, and, in the case of this year, Russian and Spanish speakers, and specific workshops, said Grossman.

The convention is also an opportunity for allied groups to recruit participants in their programs.

Miri Kornfeld is director of high school programs with StandWithUs, a Los Angeles-based, pro-Israel education nonprofit dedicated to teaching students, teachers and parents about the Jewish state, as well as fighting anti-Semitism. The organization has a major presence at the international convention And like BBYO, StandWithUs offers leadership development and teenage-focused programming, but using Israel as a case study.

"BBYO is a natural part of our teen leadership work. Both organizations' programming streams together," she said.

Last year, they reached 90,000 students, including through BBYO's annual convention, through presentations and educating the masses. "But from there we get our passionate students, including some of whom are interning with them this year," she said.

Every year about 20 BBYO participants intern with StandWithUs.

The kids she finds from BBYO are passionate and Zionist-the sort of leaders they cultivate.

A 2011 BBYO Impact Study funded by the Charles and Lynn Schusterman Family Foundation found that alumni are more likely to engage in leadership roles as adults because of their emphasis on education, training and community-building.

"The great thing about teenagers is they are better than older generations," said Grossman. "They can argue different perspectives then play with each other later."

They can also march in streets.

"In Germany, I participate in the international Fridays for future strikes, which is a grassroots movement about environmental justice. Like BBYO, it gives teens like me a platform to raise our voices which would otherwise be unheard without the power of unity," Naomi Tamir of Germany. "Under tikkun olam, we are able to run programs at our chapters or on regional level that work on the issues our community, city, country and the entire world faces, like climate change. Although right now we aren't eligible to vote, we have already built up the movement of BBYO, and it shows us that we can be-and we are-strong enough for change."