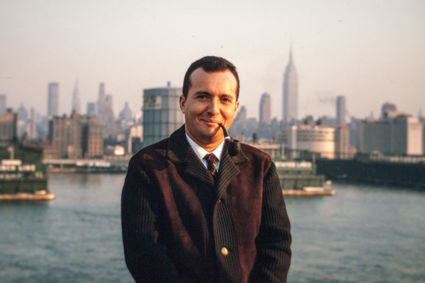 Michel Cojot was a key figure and unsung hero in the 1976 rescue of hostages from the Entebbe airport in Uganda.

(MELBOURNE, FL)-The world held its breath for seven days In 1976, after an Air France airplane carrying 250 passengers to Paris from Tel Aviv was hijacked by terrorists. The Israeli mission to rescue them, known as Operation Thunderbolt, is just one of the many moving events depicted in the new documentary film, "Cojot," which will be screened at 7 p.m. on Thursday, March 12, at the Premiere Theaters Oaks 10 in Melbourne. "Cojot," a film by Boaz Dvir, is narrated by actor Judd Nelson and tells the little known story of Michel Cojot, a Holocaust survivor who set out to kill his father's Auschwitz Nazi executioner, former Nazi officer Klaus Barbie, and ended up playing a key role in the 1976 daring hostage rescue at the Entebbe airport in Uganda.

Filmmaker and author Boaz Dvir will be in attendance and will take questions from the audience at the conclusion of "Cojot."

"I'm excited to return to this wonderful community," said Dvir. "I'm honored to present 'Cojot' in Brevard County and also sign copies of my current book, 'Saving Israel.' I very much look forward to reconnecting with friends and hearing their feedback."

"This is the second time we have hosted award-winning filmmaker Boaz Dvir," said Trachtman. "He has spent over a decade researching these historic events and the stories that have emerged are not to be missed. The Jewish Federation of Brevard is privileged to screen 'Cojot' prior to its release to the public, and is honored that Boaz Dvir will be joining us at the theater for a discussion and book signing immediately following the film."

University of Florida professor and historical consultant for the film, Gayle Zachmann, will be on hand during the Q&A portion of the event. Dvir will also be signing copies of his latest book, "Saving Israel," based on the story of World War II aviators who helped Israel win its war of Independence in 1948.