These 7 Jewish actresses shaped Hollywood as we know it 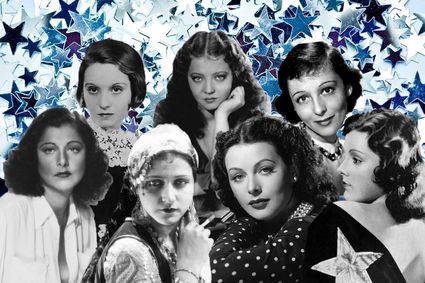 This story originally appeared on Alma.

Both on screen and behind the scenes, Jewish directors, producers and writers are credited with developing the Hollywood system as we know it today. These seven pioneering Jewish actresses defied expectations of their gender and many survived religious persecution, fleeing Europe during World War II. Their films are testaments to their talent and prove the power of cinema as both a realm of escapism and a vehicle to explore some of the world's most pressing issues.

The Austrian actress Elisabeth Bergner was nominated for a best actress Oscar in 1935 and even may have helped create the titular character in the film "All About Eve." Bergner was one of Germany's most renowned theater and film actresses, known for her androgynous, pants-wearing roles (something pretty unheard of at the time).

After moving to London, she helped fellow actors escape Nazi Germany. During a screening of her movie "The Rise of Catherine the Great" in Berlin, Nazis staged a riot as part of their larger campaign to ban Jewish art. Bergner and her husband, director Paul Czinner, soon fled to the U.S., where she starred with Laurence Olivier in "As You Like It" (1936). She returned to Europe after the war, acting in the 1973 film "Der Fußgänger" ("The Pedestrian"), which was nominated for an Academy Award and Golden Globe. A Berlin city park was named for Bergner.

As an openly bisexual American actress who was charged with murdering her husband (inspiring three films), Libby Holman led a controversial life. Even though it was ruled a suicide, the death of Holman's husband, Zachary Smith Reynolds, tarnished her reputation and coverage of the incident was marred by anti-Semitism. She was also the youngest woman to graduate from the University of Cincinnati and went against social standards by playing shows with African-American musicians. Holman befriended Martin Luther King Jr. and helped pay for his 1959 trip to India to study the teachings of Mahatma Gandhi.

In addition to her involvement in the civil rights movement and taking part in the experimental film "Dreams That Money Can Buy" (1947), Holman is largely remembered as a stage actress. She has been credited as well for popularizing the strapless dress, which was her signature look.

Read more: "Dreams that Money Can Buy: The Tragic Life of Libby Holman," by Jon Bradshaw

Ruby Myers, who went by the stage name Sulochana, was an Indian actress of Middle Eastern origin who defied the social norms of her era by starring in early Hindi silent films. During the late 1700s, Jews from Iraq, Syria, and other parts of the Ottoman Empire came to India, establishing the Baghdadi Jewish community. Some of the first women to act in Indian movies came from this Jewish Diaspora.

Myers, who was working as a telephone operator when she was discovered, was hesitant to pursue acting. But she went on to star in films including "Typist Girl" (1926) and "Wildcat of Bombay" (1927), in which she played eight characters. When talkies took over, she learned Hindustani. In the 1930s, Myers opened her own production house, Rubi Pics, and in 1973 was awarded the Dadasaheb Phalke Award, India's highest award for cinema.

Read more: "Voices of the Talking Stars: Women of Indian Cinema and Beyond," edited by Madhuja Mukherjee

Born to Russian-Jewish immigrants, stage and film actress Sylvia Sidney rose to fame in the 1930s for playing the partner of gangsters. Sidney starred alongside the leading actors of her day, including Humphrey Bogart, Cary Grant and Spencer Tracy. She also was one of the first American actresses to work with Alfred Hitchcock, appearing in "Sabotage" (1936). The character actress also had a strong career in theater and television.

Later in life, Sidney was nominated for an Academy Award for "Summer Wishes, Winter Dreams" (1973). She went on to act in Tim Burton's "Beetlejuice" and "Mars Attacks!," which was her last movie. On the side, she raised pug dogs for competitive show and wrote two books on needlepoint.

Read more: "Sylvia Sidney-Paid by the Tear," by Scott O'Brien

Luise Rainer, who was born in Germany, made history as the first actress to win multiple Academy Awards and to win multiple back to back. Despite a burgeoning career on film and stage in Vienna and Berlin, she moved to Hollywood in the 1930s because of Hitler's rise to power. After only a few years in the U.S., she won her first Oscar for "The Great Ziegfeld" (1936). She played Anna Held, the common-law wife of theater producer Florenz Ziegfeld, in the movie inspired by true events. After winning a second Academy Award for "The Good Earth" (1937), her career at MGM faltered and she later described her Oscars success as a curse. But her contributions have been recognized with stars on both the Hollywood Walk of Fame and the Boulevard der Stars in Berlin.

Read more: "Seen from the Wings: Luise Rainer My Mother, The Journey," by Francesca Knittel-Bowyer

Lillian Roth began her career as a child star, making her Broadway debut in "The Inner Man" and going on to star in Paramount Pictures films including the Marx Brothers' "Animal Crackers" (1930). In her personal life, Roth dealt with alcoholism and lacked autonomy in many of her romantic relationships: She married many times. She detailed her tribulations in the 1954 memoir "I'll Cry Tomorrow," which was an international bestseller. While she eventually converted to Catholicism, she said that she could never forget her Jewish heritage and her life was richer because of it. In 1955, "I'll Cry Tomorrow" was made into a movie of the same name and was nominated for four Academy Awards.

Hedy Lamarr is maybe the only person to both have a star on the Hollywood Walk of Fame and be inducted into the National Inventors Hall of Fame. Lamarr began her career in European cinema, most notably performing nude in the controversial Czech film "Ecstasy" (1933). After leaving Europe, she became a Hollywood star, with her first role in "Algiers" (1938), followed by a slew of MGM films. During World War II, the self-taught inventor worked with George Antheil, an avant-garde composer, to create a radio guidance system that would thwart Axis attempts to jam Allied torpedoes. This frequency-hopping transmission method would prove foundational in the development of Bluetooth and other technology. She was also one of the inspirations for Disney's Snow White and the original Catwoman.

Read more: "Hedy's Folly: The Life and Breakthrough Inventions of Hedy Lamarr, The Most Beautiful Woman in the World," by Richard Rhodes.