From 'Spock' greetings to chopstick Torah pointers, synagogues are getting creative amid the coronavirus outbreak 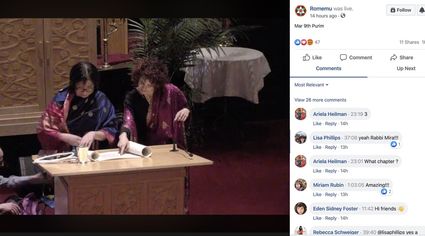 (JTA)-On a typical Friday, some 200 people show up for services at Temple De Hirsch Sinai, a Reform congregation in Seattle.

But last week, there was no one in the pews as Rabbi Daniel Weiner welcomed Shabbat in the synagogue's smaller sanctuary. Instead, some 1,500 people watched Weiner lead the prayers on their computers.

The synagogue hasn't been holding any services for 10 days due to the coronavirus outbreak, which has claimed 21 lives in Washington State and thousands around the world.

Though there wasn't a physical minyan, the quorum of 10 people required to say certain prayers, Weiner realized that "in the virtual space we were well above a minyan."

"It felt unusual but I think we are all in vastly unusual circumstances," he told the Jewish Telegraphic Agency on Monday. "We are all kind of rewriting how we do things."

Indeed, Jewish communities around the world are engaging in the same kind of rethinking as the coronavirus spreads, turning long-standing communal practices into potentially dangerous behaviors. Synagogues are reconsidering every aspect of their offerings, from whether to hold services to how to serve food to exactly how congregants should encounter ritual objects.

The changes are being made rapidly, with limited and shifting guidance from health authorities, and different communities are coming to different conclusions. What's clear, however, is that the epidemic could have long-lasting consequences for communal Jewish life.

Ordinarily, the worshippers who attend Friday evening services at Congregation Beit Simchat Torah, an unaffiliated synagogue in New York City, are asked to touch each other during the Hamotzi, the blessing over the bread. But the synagogue sent community members an email on Monday instructing them to "instead focus on our spiritual connection."

Beit Simchat Torah has recruited members who are scientists and doctors to serve on a team to make recommendations for the community.

In the email, members were told to take a number of precautions when attending services. They include avoiding the custom of kissing ritual objects such as mezuzahs, prayer books and the Torah scroll.

As an alternate greeting to kissing and handshakes, members were told they should instead "touch elbows, or wave, or do the Spock 'live long and prosper' priestly hand blessing!"

The synagogue already livestreams its Friday evening services, but now will also be making its Saturday services available online. Rabbi Sharon Kleinbaum is also reaching out to older members who may not be safe attending services in person.

"It saddens me for some of our folks who are older - they might not have a partner, they don't have children, so self-quarantining means real isolation," she said. "My goal is to make sure all the folks who are in that situation are getting contact from us and being connected to community."

Kleinbaum said her congregation draws on its history in how to deal with the current situation.

"CBST, as the LGBT synagogue in NY, has gone through a plague before," she said referring to the HIV/AIDS epidemic of the 1980s and 1990s, during which 40 percent of its membership died. "We have a lot of wisdom and spiritual depth about dealing with these kinds of situations and we're doing everything we can to follow all the protocols recommended by science and by the CDC."

Similarly, Mishkon Tephilo, a Conservative synagogue in Los Angeles' Venice Beach, is still holding services but is taking steps to reduce the spread of germs.

The synagogue is installing automatic hand sanitizer pumps in the building and worshippers have been asked to wave at the Torah rather than touch it with their tzitzit fringes, as is customary. Individual rolls are being served instead of a large challah, and there likely won't be any candy thrown at a bat mitzvah that is planned for this weekend, according to Rabbi Gabriel Botnick.

"It's a little weird being a loving warm community where we can't actually be in touch as much, but the biggest concern we have is for the elderly in our community," Botnick said.

Many synagogues are making the decision to cancel or scale back gatherings, including regular services. Rabbi Barry Leff of Herzl-Ner Tamid, a Conservative synagogue just outside Seattle on Mercer Island, Washington, said he examined each event individually before deciding whether to proceed.

Purim celebrations were canceled and people were urged to watch the synagogue's megillah reading online rather than attend.

But the rabbi decided to go ahead with a bat mitzvah celebration last weekend because he felt it was harder to nix-the bat mitzvah girl had spent a year preparing her Torah portion and since there is a new portion every week it would not be possible to delay it. Canceling it would also mean her family would incur "substantial financial costs," he said in a sermon on Shabbat.

Still, turnout at the bat mitzvah was lower than usual. And the synagogue hired servers for the luncheon following the service to avoid a buffet-style setup where germs could more easily spread.

"These decisions are difficult because these are things that people look forward to and they're important to use as a community, but our priority is keeping everyone healthy and safe," Leff said.

Leff's congregants had spent significant time working on a Purim spiel-a satirical play traditionally performed as part of the holiday celebration. Instead of doing it without a live audience, the members will perform it next Purim.

For many congregations, Purim posed a difficult question: whether to go forward with the festivities associated with the one-day holiday at a time when most communities have no documented cases of the coronavirus.

Some landed on compromises. At Skylake Synagogue, an Orthodox congregation in North Miami Beach, Florida, the megillah reading proceeded as usual, but the party and costume contest afterward were canceled.

Other synagogues went forward with their plans.

Ohev Sholom-the National Synagogue in Washington, D.C., an Orthodox congregation, held its regularly scheduled Purim celebrations both Monday and Tuesday. But it also livestreamed the megillah readings for those who were unable to attend and recruited volunteers to give out hamantaschen using serving utensils so that fewer people than usual would touch the pastries directly.

"One has to strike a very careful balance with this type of thing between being safe and enacting proper precautions but also not inducing panic, and we feel that we should follow government guidelines, that we should not be doing more than they recommend," said Maharat Ruth Friedman, a clergy member at the synagogue. "We completely understand what has led communities to make that decision [to cancel], it was just not something that we felt was essential."

Communities without choices came up with other innovations. Members of Young Israel of New Rochelle, an Orthodox synagogue in the suburbs of New York City, have been ordered to self-quarantine after a member was diagnosed with the coronavirus.

To make sure members could still hear the megillah reading, Rochel Butman, a local Chabad emissary, enlisted 20 rabbis to go house to house and read the megillah from the outside for those who are quarantined inside.

Some Jewish clergy say the crisis is drawing their attention to aspects of their communities that they don't want to see change.

On Saturday, Rabbi Mira Rivera led services for about 10 people at Romemu, the Jewish Renewal synagogue in New York City where she serves as a rabbinic fellow. Usually at least 100 worshippers show up for Saturday morning services, but instead they were asked to watch via livestream. 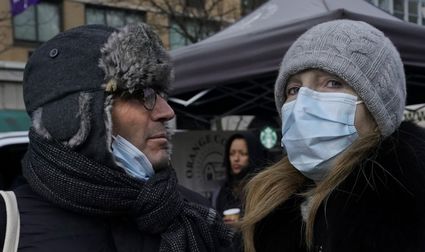 Timothy A. Clary/AFP via Getty Images

But others see a silver lining in the fact that the public health crisis has caused them to take a hard look at practices that were ripe for revisiting.

Last Shabbat, congregants who read from the Torah at Temple Emanuel of the Pascack Valley, a Conservative synagogue in Woodcliff Lake, New Jersey, each used a chopstick rather than everyone sharing the yad, the pointer that is traditionally used to follow along in the text.

"Passing the yad from one to another is the same as shaking hands. The germs pass, too," Cantor Alan Sokoloff wrote on Facebook, explaining why he had substituted chopsticks. "After each reading, the reader took his chopstick home and/or disposed of it. After Shabbat, one of my readers sent me a picture of his 'memorialized chopstick'-[he'd written the] parsha and date. A new trend perhaps?"