By World Israel News and AP

Netanyahu and Gantz agree to work toward emergency unity government 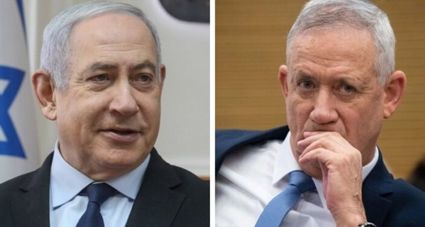 Israeli Prime Minister Benjamin Netanyahu on Thursday called for the formation of an emergency government to confront a growing crisis over the coronavirus, offering a potential way out of the deadlock that has paralyzed the political system for the past year.

"I call for the formation now, even this evening, of a national emergency government," he said.

"It will be an emergency government for a limited period. Together we will fight to save the lives of citizens," he added, saying that politics should be put aside.

Citing the urgent health crisis, Gantz initially commented, "Blue and White, under my leadership, will support every appropriate measure, putting aside political considerations entirely, at this complex and sensitive time."

Later on Thursday, Gantz expressed willingness to discuss an emergency government, stating, "In light of the situation, we would be willing to discuss the establishment of a broad national emergency government that would include representation of all parts of the home. Every effort has been made to promote this move for the citizens of Israel and the State of Israel," Arutz 7 reported.

President Reuven Rivlin on Thursday communicated to the prime minister  that "he welcomes any initiative leading to the formation of a government as soon as possible," stressing that his "house is open," a reference to the fact the president oversees the process of selection of a prime minister and coalition formation.

"We must do everything to focus on the tasks we face," said the president.

A statement from Rivlin's office said, "The president also stressed that Beit HaNasi [the President's Residence] is also available to the parties as a place to meet and talk and that he is ready to help in any way required in order to get to agreement as quickly as possible for the citizens of Israel."

The conciliatory language from Netanyahu and Gantz marked a sharp change after months of acrimonious campaigning and heightened rhetoric in the wake of another inconclusive election earlier this month.

Israel has been relatively insulated from the coronavirus scare, with just over 100 cases diagnosed so far. But the numbers have begun to creep upward in recent days.

Israel has imposed a number of tough restrictions to slow the spread of the virus, placing tens of thousands of people into protective home quarantine, ordering all Israelis who return from overseas into quarantine and barring almost all tourists from entering the country.

This month's election was Israel's third to end in deadlock in the past year.

Netanyahu's Likud emerged as the single largest party but fell short of securing a majority of seats in parliament required to form a government.

Although a slight majority of lawmakers oppose Netanyahu, his rival, Blue and White party leader Benny Gantz, also does not appear to have sufficient support to form a government due to divisions within the opposition.

A unity government between the two large parties would be the most straightforward way out of the crisis.

But after three contentious campaigns, there is great animosity between the two leaders, and it remains unclear who would lead a unity government. Still, the growing coronavirus threat may be the spark that brings the sides together.

Gantz has previously ruled out a partnership with Netanyahu, citing the prime minister's upcoming trial on corruption charges, which has begun.

Netanyahu has insisted that he lead any unity government.