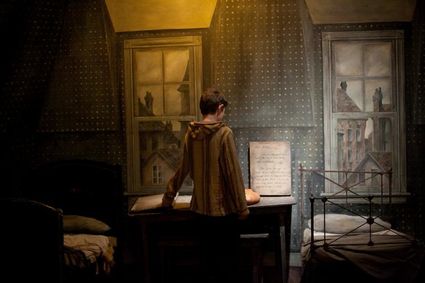 A young visitor examines a display in the United States Holocaust Memorial Museum's "Remember the Children: Daniel's Story," designed for children 8 and older.

(JNS)-Imagine a teacher assigning a Holocaust-related project to a high school student in the United States, such as the creation of the "ideal concentration camp" or a Nazi cereal box. Or maybe the class spends just a single lesson on the complex subject matter as part of world or European history.

These are not fictionalized scenarios; they are some of the findings by researchers looking to understand the state of Holocaust education in America. Questions of who should get taught, what students know and how they are learning are coming to the forefront with the rise of anti-Semitism in North America and Europe, and as Western Europeans themselves acknowledge that don't know specific details about the Holocaust, including how many Jews were systematically murdered by the Nazis during the years of World War II.

"I think there is a recognition that the Holocaust and the roots of hate have to be taught, and that we need to more consciously teach kids about it, given what's happening in society," said Howard Libit, executive director of the Baltimore Jewish Council, who was among a group that lobbied the Maryland state superintendent of education to improve Holocaust education. With no state guidelines and educational markers to reach, Libit said some students weren't being adequately taught what they needed to know.

"What we identified was in middle school, it was very nonspecific about what should be taught, and at the high school level, world history didn't mention the word Holocaust, though it talked about genocide," he said. "Our position is that [guidelines] need to be specific, so there's no confusion among teachers or school districts. We're not mandating how long it needs to be taught for, just that it needs to be specific."

The U.S. House of Representatives recently passed the "Never Again Education Act," which would provide additional funding to the United States Holocaust Memorial Museum in Washington, D.C. The funds would be earmarked for resources and training to assist teachers in incorporating Holocaust into their curriculum to "ensure that students have access to accurate and engaging historical information about the Holocaust." Such training would include local and national workshops and standards of pedagogy for teaching about the Holocaust, along with additional digital and print resource, as well as traveling exhibits.

The bill passed 393-5 with 32 House members not voting. A related bill is working its way through the Senate.

'Momentum is moving in the right direction'

According to Elisa Rapaport, chief operating officer of the Anne Frank Center for Mutual Respect in New York, the state of Holocaust education nationwide is "not sufficient, and there are some challenges, but the momentum is moving in the right direction."

Her organization has been leading the charge for Holocaust education nationwide thanks to its "50-State Initiative." She explained that "it's an effort the Anne Frank Center has undertaken for several decades to expand Holocaust and genocide education across every state. Every single child ought to learn about the Holocaust and other genocides."

While there has been more interest in Holocaust education in recent years, she acknowledged feeling "disheartened sometimes, especially when I see a study like the one in New Jersey that found [some] student teachers thought Ronald Reagan was president during World War II."

The researcher who conducted that New Jersey survey of college students in 2016 is Jennifer Rich, executive director of the Center of Holocaust and Genocide Studies at Rowan University in Glassboro, N.J., whose grandparents survived the Holocaust.

Rich notes that 25 years ago, New Jersey was the first state in the nation to mandate Holocaust education. Yet when she polled 125 young adults-all graduates of New Jersey public schools and studying to be teachers in the Garden State-about the Holocaust using a series of open-ended questions, the results were shocking.

When asked to define the Holocaust, she received answers such as "it led to great advances in science" and was "a successful use in propaganda."

"These are kids who are studying to become teachers," she said, "There were definitely some answers that were good and some that were moving in the right direction."

But many were flat-out wrong.

Rich also informally asked her own students how they learned about the Holocaust. "I heard things that were horrifying to me; one student told me she was asked to make an 'ideal concentration camp' out of popsicle sticks. I asked her what ideal meant, and she didn't know. Another student had to make a Nazi cereal box."

That's when she became "really worried about how our students are learning about the Holocaust."

'There's a lot of punting going on'

Part of the problem, she believes, is that there's no definitive guide on how to teach it. Should the lessons be tied to reading the novel Night by Elie Wiesel in middle school or during world history class in junior year? Should it be a course in its own right or part of a greater anti-ethnic bias curriculum?

"There's a lot of punting going on. No one is sure when or how Holocaust education is taking place," said Rich. "There are no tests on the Holocaust, and teachers are busy, so sometimes the Holocaust is taught in one or two class periods, if at all."

Rich has since conducted other surveys with similar results, and she is not alone in her findings.

In the spring of 2019, as anti-Semitic attacks nationwide were on the rise, the Pew Research Center conducted a survey both teens and adults to see what they know about the Holocaust. More than half of the 1,811 teens ages 13 to 17 who responded to the survey could not correctly answer how many Jews died in the Holocaust or identify how Hitler rose to power. (Adults who took the survey had similarly disappointing answers with 29 percent not sure how many Jews were killed in the Holocaust, and another 26 percent guessing the incorrect number.)

In Arizona, a relatively new legislator, State Rep. Alma Hernandez, a Democrat, is leading the charge for Holocaust education.

"A lot of young people don't know anything about the Holocaust, which is really scary," Hernandez, who is Jewish, told JNS. "We owe it to the Holocaust survivors and their families, especially those survivors who are still living, to push for this because they have gone through so much in their lives."

She adds, "I was very fortunate that at my high school we had a Holocaust survivor as a teacher, and she always wanted us to learn about it. Not everyone has the same privilege I had of being around a Holocaust survivor, so that's part of the reason we wanted to make it mandatory."

Holocaust education is currently encouraged throughout the state, but Hernandez said that in some places, the lesson comprises teaching two or three lines in a textbook, which is hardly sufficient. "It's important that students fully learn and understand what the Holocaust was and why it's important that it never happen again."

'Teachers are worried to have these conversations'

Oregon, meanwhile, is currently working on implementing its newly mandated Holocaust curriculum into its schools. The legislation was spearheaded through the state government by State Sen. Rob Wagner, who credits Claire Sarnowski, all of 12 at the time, with bringing the issue to his attention.

It was Sarnowski, he said, who gave a copy of From a Name to a Number, an autobiography chronicling the life of a local Holocaust survivor, Alter Wiener. After reading the book and meeting with Sarnowski and Weiner, Wagner told the elderly man that "your story needs to be part of the curriculum, [along with] your message of perseverance and how you tie the lesson about 'othering' to genocide-and not just the genocide of the Holocaust."

That's when the legislator realized that his state didn't have a good way to assess what schools were actually teaching. "Some schools weren't talking about it at all," he said. "It was beguiling. How do you talk about the mid-20th century and not talk about the Holocaust?"

Sarnowski, for her part, helped champion the legislation, even presenting written testimony to the state legislators.

"As a student, I was saddened by our education on topics such as the Holocaust and other genocides, which were merely glanced over and lacked depth. More importantly, I realized that my peers did not receive valuable lessons that accompany these teachings such as compassion, gratitude, perseverance, tolerance and acceptance," she wrote. "In schools today, prejudice is as prevalent as ever since acts of racial, social and religious injustice occur in our classrooms. These teachings can combat this stereotyping and ensure students are equipped to be an upstander rather than a bystander."

But before those lessons can happen in meaningful ways, stress those in the field, teachers must have access to the right materials and tools to teach the subject properly.

Rich, of Rowan University, noted that "there are pockets of teachers across the country who are really dedicated to Holocaust and genocide education, and there are teachers who are particularly afraid to teach about these things in this particular moment in history because we do see rising impulses and xenophobia, anti-Semitism and racism. Teachers are worried to have these conversations with their students because they don't know where it will go."

The answer, she said, "is to educate. We need to give the teachers what they need, from pedagological tools to bring in Holocaust education in age-appropriate ways to giving them background knowledge and resource materials."

Some are already working on that. In Maryland, for example, the Baltimore Jewish Council helps sponsor a teacher's institute on Holocaust education. In the summer of 2019, more than three-dozen educators took part in the classes. 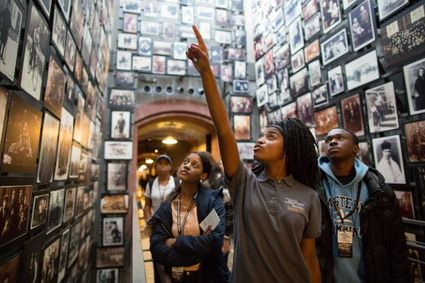 "Many teachers need quality professional development to support their efforts in teaching the Holocaust in their classrooms," said Kim Blevins-Relleva, National Professional Development Programs for Educators at the United States Holocaust Memorial Museum, which provides free teacher trainings and what are considered to be historically sound classroom resources. These include incorporating Holocaust-survivor testimony because it personalizes the history, emphasizes its impact on individuals and highlights the diversity of individual experiences."

The current climate of divisiveness and rising anti-Semitism only make educating about the Holocaust more timely.

"The Holocaust did not begin with killing; it began with words and ideas," said Blevins-Relleva. "It was made possible by longstanding anti-Semitism and the willingness of many people to actively support or acquiesce in the new form of racist anti-Semitism that underpinned the Nazi state. That's why understanding the history anti-Semitism and its ultimate expression in the Holocaust is so important."