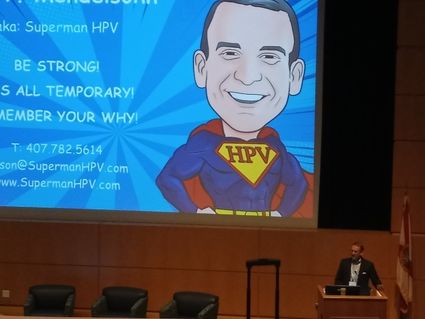 Last year, Jason Mendelsohn (aka SupermanHPV) spoke on Capitol Hill at a Congressional Briefing titled "Let's End HPV-related Cancers." During his talk, in which he shared his human-papillomavirus-related (HPV) cancer-survivor story, he showed a 2-minute video of pictures of his family life, hospital stays for treatment, and ringing the bell in celebration of his recovery. The song accompanying the photos was "If You're Going Through Hell" by Rodney Atkins. Mendelsohn's mom, Toby, recommended this song as it was most appropriate:

"If you're going through hell keep on going/Don't slow down if you're scared don't show it/You might get out before the devil even knows you're there. I've been deep down in that darkness/I've been down to my last match/Felt a hundred different demons breathin' fire down my back..."

Mendelsohn can relate to the words. He was diagnosed with stage-4 HPV-related tonsil cancer in 2014, fought the grueling fight to recovery and the aftermath, and now has been cancer free for five years. But just because he is freed from the cancer demon doesn't mean he put it all behind him. Not this man who earned the nickname "SupermanHPV" while undergoing cancer treatment.

Mendelsohn now uses that persona as a passionate spokesman for several organizations to educate as many people as possible about human-papillomavirus, its relationship to cancer and how it is preventable. He serves on the executive board for the Head and Neck Cancer Alliance and is active with the American Cancer Society's HPV Round Table. He launched http://www.SupermanHPV.com, because he feels responsible for the protection of boys and girls from HPV preventable cancers. His website provides inspiration and information for those diagnosed and/or researching HPV, the HPV vaccine and HPV related cancers.

Like his fictional superhero namesake, Mendelsohn has traveled the world almost "faster than a speeding bullet," trekking from speaking engagements in Dublin, Ireland to Des Moines, Iowa in the same month. In the past few years, Mendelsohn has been on podcasts; TV interviews; radio shows; and featured in several newspaper articles, including a feature article in the Chinese Epoch Times; and writing an article for the National Foundation for Infectious Diseases (read it here https://nfid.wordpress.com/2018/06/17/supermanhpv-truth-justice-and-cancer-prevention/). He also participated with PRIME CME in their HPV video module titled "The Burden of HPV-Associated Cancers: A Patient Perspective."

Most recently, he spoke at the Moffitt Cancer Center's Florida Leadership Summit to Eliminate HPV-Related Cancers. In June, Mendelsohn will head to Pennsylvania to speak at the Pennsylvania Immunization Conference, and in July he will address the Survivor Symposium in Chicago. He has been asked to share his cancer story at meetings in Michigan, Wyoming and Iowa.

His message is always the same: HPV-related oropharyngeal cancers (cancers of the tonsils, base of tongue and throat) can be prevented by having children (boys and girls), beginning at age 9, vaccinated for HPV. Currently, there are three vaccines approved for the prevention of HPV: Gardasil® VIS*, Gardasil®9 and Cervarix® (exclusively for girls). These vaccines are one of the best ways parents can prevent HPV-related cancer in their children. Mendelsohn also suggests regular dentist or physician visits and ask that they perform an oral, head and neck exam at each visit.

There are two reasons for vaccinating at a young age: once exposed to HPV (which is possible after becoming sexually active) the vaccine could be less effective; and given at a young age, the body can easily absorb the vaccine, according to information from the Head and Neck Cancer Alliance.

"I want people to understand that 3 out of 4 adults by age 30 have HPV, 62 percent of freshmen in college, and men between the ages 40 and 60 are the most highly diagnosed with HPV-related cancers," Mendelsohn told the Heritage. HPV can lay dormant in the body for decades. In Mendelsohn's case, he learned that he probably contracted the virus while in college, 32 years earlier. He wishes the vaccine existed when he was a young boy, so that he would have likely not been diagnosed with HPV related tonsil cancer.

"But the good news is there's angels everywhere out on the street/Holdin' out a hand to pull you back up on your feet..."

In addition to educating people about HPV, Mendelsohn is an angel to those recovering from cancer treatment, their caregivers and other survivors, giving them hope and encouragement. On average, two to four survivors reach out to him every week, from countries all over the world. He is currently speaking with patients in Nigeria, Israel, India, and Canada, as well as throughout the United States. "They feel alone," he said very seriously at the Congressional Briefing. He understands what cancer survivors are going through, telling them that they will get back to their life before cancer. Knowing that others go through these same ordeals helps cancer survivors deal with their own side effects and not feel alone in the struggle.

They always have questions about what he went through-a radical tonsillectomy, neck dissection (42 lymph nodes removed), feeding tube, followed by seven weeks of chemo and radiation.

Many think that once the bell is rung (signifying cancer treatment is over) life will go on as it did before the cancer.

"The treatment was brutal," Mendelsohn said. "The last day of treatment I thought was the best day of my life-but it got much worse."

After five weeks of radiation, he also had third-degree burns in his throat. His saliva was so thick he couldn't swallow and had to spit it out constantly for approximately a month. He suffered gagging and choking 30+ times a day and would go to sleep fully hydrated and wake up two hours later completely dehydrated because of the burns sucking the fluid from the inside out. His new normal is getting Charlie horses in his neck every day and he uses a fluoride toothpaste and gel trays on a daily basis to keep his teeth strong, and his mouth healthy.

His wife of 23 years, Ronni, and their three children (Ryan, Lauren and Adam) continue to be his motivation to protect other families from the hell his family went through in 2014. He loves them more than anything. "No kids should ever have to worry that their father or mother is going to die from an HPV preventable cancer, and no father should ever have to make videos to his wife and kids saying goodbye like I did in 2014," he said.

To learn more about tonsil, tongue and throat HPV-related cancers, visit the Head and Neck Cancer Alliance, http://www.headandneck.org as well as http://www.SupermanHPV.com.

*Jason Mendelsohn refers to Christine DeSouza as Lois Lane because she was the first person to share his SupermanHPV story, which has since been picked up in Jewish newspapers all across the country.