Blue and White dissolves as option for unity government unfolds 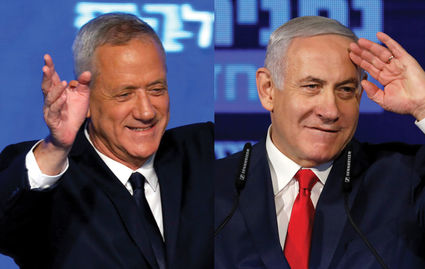 JERUSALEM (JTA)-As his Blue and White party was on the verge of breaking up, its leader, Benny Gantz, was elected speaker of the Israeli Knesset on Thursday evening.

Gantz has been tasked with forming a coalition government following elections earlier this month, Israel's third vote in less than a year.

The split in his party is over a debate about joining a unity government led at first by Prime Minister Benjamin Netanyahu.

The Israeli media reported that Gantz would hold the speaker's position for a short time, until the formation of a unity government. According to reports, Netanyahu would serve first as prime minister for 18 months, with Gantz as foreign minister before taking over for Netanyahu.

Gantz was elected speaker in a 74-18 vote, with 28 lawmakers not showing up for the balloting. The entire right-wing bloc voted for him.

On Thursday, Gantz declared himself the candidate to become speaker in order to preserve the option of forming a unity government. He succeeds Yuli Edelstein, who stepped down a day earlier after shutting down the parliament for several days over losing his post and pressing for a unity government. Critics said Edelstein was undermining Israel's democracy.

The right-wing bloc agreed to support Gantz as speaker, a tacit acknowledgement of support for a unity government with the former military chief of staff, while Avigdor Liberman and his Yisrael Beiteinu party, as well as the mostly Arab Joint List, would join the new Blue and White in the opposition, according to reports.

Blue and White had said initially that it would support Meir Cohen of Lapid's Yesh Atid party for speaker. Cohen was to use the position to drive a further wedge with Netanyahu and his Likud party by proposing legislation that would forbid a lawmaker under indictment from forming a government and serving as prime minister. Netanyahu is facing three corruption counts, but his trial has been delayed because of the COVID-19 outbreak.

Gantz and Netanyahu further discussed a unity government in talks late Wednesday night, according to reports.

"Gantz decided to crawl into Netanyahu's government," Lapid told his Yesh Atid faction, according to reports.

Reports said that in a unity government, a Likud member would serve as finance minister and Netanyahu agreed to give up the Justice Ministry, with Yechiel Trooper of Blue and White assuming the position.