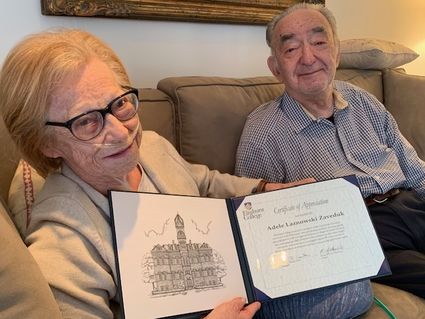 Adele Zaveduk holding her Certificate of Appreciation, with her husband, Ben, beside her.

When VITAS® Healthcare Chaplain Nicolle Grasse met Adele Laznowski Zaveduk in early January in the home she shared with her husband, the 82-year-old woman was visibly weak from a long fight against advanced heart failure.

Zaveduk had been receiving care from VITAS for only a few days. Her doctors expected she had only a few weeks to live. Yet her eyes shone brightly as she thumbed through a box brimming with envelopes, each bearing her name and address scrawled by a child's hand.

For 25 years, she had educated children about her experiences as one of the Holocaust's "hidden children" in hope that shining light on modern history's darkest period might prevent it from reoccurring.

What her family did not know, however, is that Zaveduk's own Holocaust experiences had prevented her from completing her own education. She had never finished high school, never earned a college degree-a fact that surprised even her husband of 63 years, Ben, when Zaveduk revealed it just weeks before she died.

Zaveduk's VITAS care team, however, ensured she received the recognition and closure she desperately wanted and richly deserved. Grasse, in particular, reached out to her contacts at Elmhurst College in Chicago and its Holocaust organization for assistance.

"Adele was deeply sad about having never received a diploma, as she had done so much to educate children and advocate for education," said Grasse.

Born in France in 1937, Adele Laznowski was five when her parents were sent to the Auschwitz concentration camp. Her mother arranged for Zaveduk and her sister to be raised by a Catholic family. Her parents survived, but she and her sister did not recognize them-or their Jewish heritage-when they were reunited in 1945. Zaveduk's father soon died, her mother remarried and Zaveduk was put to work as a child in a family store. Years later, she moved to Chicago, married Ben and found her passion for teaching children about the Holocaust.

Thank to Grasse's intervention, Elmhurst College President Troy VanAken and Chaplain H. Scott Matheney presented Zaveduk with a special award in an early January ceremony at the couple's home. "She committed her life's purpose to this endeavor so that others might remember and never allow it to happen again. We honor her life of service, her role as an educator and her witness to life and human rights," said Matheney. An Illinois Holocaust Museum representative praised Zaveduk's service and the value of survivors' stories.

"Adele and her husband were speechless and tearful," recalled Grasse. "It was one of the most moving experiences I've ever been a part of."

Zaveduk died peacefully at home on Jan. 23, 2020. Less than two weeks later, the Illinois State Senate adopted SR 0971 honoring her posthumously as "a strong life force packaged in a tiny body." The resolution read: "Although she did not define herself by her wartime experiences, she felt sharing her story could help in the fight."