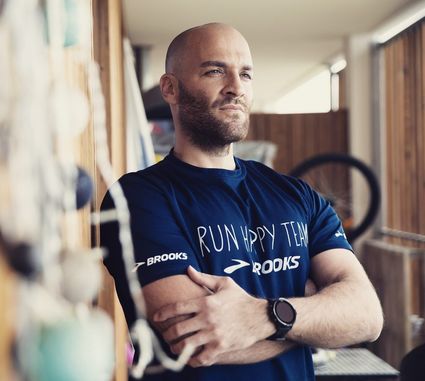 Elisha Nochomovitz standing on his balcony in Balma, France in March 2020.

(JTA)-Elisha Nochomovitz, a 32-year-old French Jew, was to be among the 17,000 participants in the Barcelona Marathon on March 15.

But the marathon, one of Europe's most popular running events, was postponed to October because of the coronavirus outbreak.

Still, Nochomovitz found a way to do what he had been training for despite being forced to spend the past month confined to his apartment in Balma, near Toulouse, under lockdown. (He had worked at a restaurant in Toulouse, but that was shut down, too, because of the virus.)

He ran an entire marathon on his balcony-a balcony only 7 yards long.

Nochomovitz, a participant in 36 previous marathons, completed the balcony run on March 17 in 6 hours, 48 minutes-more than double his usual time because he had to turn on his heels every few seconds.

But the initiative, filmed by his girlfriend Marie and uploaded to YouTube, turned Nochomovitz into an international symbol. He has been featured on CNN and CNBC, as well as in dozens of publications, including The Guardian, Time and Newsweek.

"I told myself it's the best way to take the edge off the lockdown, do some crazy challenge on the balcony but also as a gesture of support for the medical personnel," he said in a video interview that he gave Le Parisien.

He didn't stop there: Nochomovitz did two more marathons, on his porch, improving his time considerably, the NRC Handelsblad daily in the Netherlands reported.

On March 31, he lowered his time by two hours, despite adding five miles (an addition of about 1,250 sprints along his balcony.) Neighbors cheered him on as Marie offered liquids, dry T-shirts and candy.

Lockdown measures in the Toulouse area would have allowed Nochomovitz to run laps outside his home, NRC reported. But the competitor said he decided to limit himself to his artificial turf porch all the same "to make it more challenging."

Besides, as NRC noted, Nochomovitz's balcony offers a stunning and unobstructed view of the Pyrenees Mountains.

The Israeli media also showed interest in Nochomovitz's efforts. The Makor Rishon newspaper interviewed him, and it turns out he attended the Chabad-affiliated Otzar Hatorah Jewish school in Toulouse, where a jihadist murdered three children and a rabbi in 2012. (Nochomovitz's family left Toulouse before the attack.)

Nochomovitz was born Elisha Zerbib, but his parents divorced and he has not been in contact with his father, so he decided to take his mother's maiden name.

Nochomovitz has a brother in Israel and had planned to visit the country for the first time in February. He also was planning to participate in the Tel Aviv Marathon, which took place on Feb. 28. But Nochomovitz canceled his visit after foreign participants were barred from that event because of the virus.

Beyond expressing his appreciation for medical workers on the front lines of the pandemic, Nochomovitz also wanted to inspire others in lockdown, showing that they can still maintain and improve their physical condition, he told Makor Rishon.

As a public gesture, Nochomovitz's initiative was certainly successful: He has gone viral and his Instagram account now has 22,000 followers, most of them new.

But from a purely athletic perspective, he told Makor Rishon, his balcony runs are inferior to the real thing.

"I need to run slower than I'm used to because my balcony really isn't that long and you can't really develop the momentum that you could in a real marathon," Nochomovitz said. "Let's just say it wasn't that difficult."