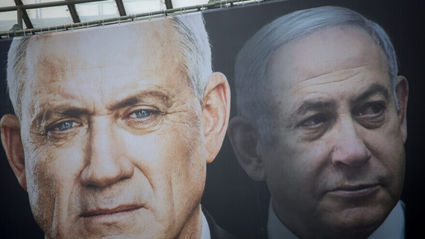 (JNS)-Israel's 15-month political stalemate, which led to three election cycles within the course of a year, has come to a close with the signing of a unity government deal between Israeli Prime Minister Benjamin Netanyahu, head of the Likud Party, and Blue and White Party head Benny Gantz. The two sides are calling it a "national emergency government" in large part to manage the ongoing coronavirus crisis, which has stymied Israel along with the rest of the world.

Both leaders posted tweets upon the signing. Netanyahu wrote that the deal is a fulfillment of his promise to form a "national emergency government that will work to save lives and the livelihoods of the citizens of Israel." Gantz tweeted that "we prevented a fourth election. We will protect democracy. We will fight the coronavirus and care for all Israeli citizens."

Knesset member Yariv Levin, lead negotiator for the Likud now slated to serve as Speaker of the Knesset in the new government, told JNS that "this emergency government is the right thing at the right time. We need unity to deal with the country's health and economic challenges."

The unity deal, which is structured as six months of an "emergency government" to be followed by a more permanent one, established Netanyahu as prime minister for the first 18 months, during which Gantz will be Vice Prime Minister and Minister of Defense, followed by Gantz taking over the premiership for 18 months, during which Netanyahu will be Vice Prime Minister.

Knesset member Moshe Ya'alon, of Yesh Atid-Telem, which used to be part of Blue and White but split off due to Gantz's partnering with Netanyahu, attacked the deal, telling JNS that "this government is bad for Israel."

He insisted that "Israel needs leadership that will rehabilitate Israeli democracy with checks and balances between its branches. Instead, we now have a dictatorship of one person: Netanyahu. Israel needs a leader who sets a personal example with no corruption. But now, we have a leader who only cares about himself and not the people."

The deal will be formally signed next week after Yom Ha'aztmaut, Israel's Independence Day, to be celebrated on April 28-29. The first order of business will be to pass legislation to set the Netanyahu-Gantz rotation in motion.

While Israeli law allows a prime minister to serve while under indictment, it prohibits a minister from doing so. A law will be passed to enable Netanyahu to serve as vice prime minister (the official title is "acting prime minister") when Gantz becomes the prime minister, despite the fact that he may be in middle of his trial on corruption charges at the time.

A law will also be passed that says that if either of the two decides to leave and collapse the government, the leader of the other party becomes prime minister automatically, with new elections being delayed for six months. This law addresses the fear in Blue and White that in order to prevent Gantz from becoming prime minister, Netanyahu will simply pull Likud out of the government as the first 18 months come to an end, which would leave the coalition with a Knesset minority and lead to an election.

The agreement dictates that the emergency government won't move forward with any significant legislation not related to the coronavirus crisis, with one exception: Israeli sovereignty over Jewish communities in the West Bank.

Levin told JNS that "we have a historic opportunity to apply our sovereignty in Judea and Samaria [the West Bank], and it is best to do so with a wide, unity government."

Blue and White, which had been against such a move, has compromised and agreed that from July 1-assuming that there is American support for it-Netanyahu can bring a vote for annexing parts of the West Bank to the Knesset, and that this legislation will be expedited by the Knesset committees. Blue and White members will be allowed to vote according to their ideology, though a Knesset majority will be required for this move.

During the first six months, the government won't fill key vacancies, such as positions of state prosecutor and police commissioner. During this period the two sides will negotiate the platform for the remaining 30 months of the government's term.

The agreement does address the controversial issue of the conscription of the ultra-Orthodox (haredim) to the Israel Defense Forces. The sides have agreed to pass a law that gives the government the power to set the annual quotas that must be met by this specific segment of Israeli society, a victory for the ultra-Orthodox parties that wanted to maintain such control.

The unity deal was signed after compromises were reached on the two issues of greatest contention between the two sides: judicial appointments and the court ruling against Netanyahu serving as prime minister.

During the last five years, the justice minister has come from the conservative camp, and significant reforms were made to the system in an attempt to appoint conservative judges to the bench.

Blue and White demanded that former labor-union chief MK Avi Nissenkorn be appointed justice minister. To counter the left-wing influence over the ministry and continue the move towards more conservative judges, Likud demanded veto power over judicial nominations. The two sides agreed that MK Zvi Hauser from Gantz's camp would serve on the committee for judicial appointments. Hauser is a conservative who served as Netanyahu's Cabinet secretary in the past and who has a strong voice for judicial independence; he is also vocal against right-wing attacks on the courts, making him a committee member who satisfies both sides.

This element of the agreement was attacked harshly by the opposition, with MK Yair Lapid, chairman of Yesh Atid, tweeting that Blue and White has "agreed to allow the criminal defendant to appoint the judges that will adjudicate his affairs."

As was expected, appeals were filed with Israeli's Supreme Court, asking its justices to prohibit Netanyahu from forming a new government and becoming prime minister while under indictment. Netanyahu asked Gantz to agree that if the court does so, then Blue and White would support a law to circumvent the court's decision and allow him to serve.

Gantz compromised, agreeing that if the court issues such a ruling then that will automatically trigger a fourth election, with Gantz serving as interim prime minister. The court has asked Attorney General Avichai Mandelblit, Netanyahu, Gantz, Likud and Blue and White to submit their replies to the complaint by Thursday at 2 p.m., after which a hearing on the issue will be scheduled.

The coalition agreement dictates that the government will start with 32 ministers, divided equally between the two sides.

Blue and White will hold the the following portfolios: defense; foreign affairs (for the first 18 months); justice; immigration and absorption; culture and sport; communications; agriculture; strategic affairs; tourism; social equality; science and technology; and diaspora affairs. They will also create a Minority Affairs Ministry, which will be led by a professional minister from the Arab sector.

The Labor Party will be joining the government as part of Gantz's camp, and will be given the economy and welfare ministries.

Likud will control the ministries of finance, public security, transportation, housing, environment, intelligence, regional cooperation, periphery, energy, Jerusalem affairs and foreign affairs (for the latter 18 months). In addition, Likud will hold the position of Knesset Speaker for the full 36 months. Likud will give the interior, health and religious affairs ministries to the ultra-Orthodox parties that are part of Netanyahu's bloc.

A question mark remains regarding the Education Ministry. At the moment, the right-wing Yamina Party, led by current Defense Minister Naftali Bennett, is not joining the administration. As a result, Likud will head the portfolio, but it will be available for Yamina should the party choose to join the government.

The agreement gives Gantz's bloc control over the Foreign Affairs and Defense Committee, in addition to the House Committee, which controls the Knesset agenda. Likud will head the Finance Committee and the special committee handling the coronavirus crisis. Netanyahu retains control over who will serve as ambassador to the United Nations, the United Kingdom, France and Australia for the entire lifespan of the government. The ambassador to the United States will be chosen by whoever is prime minister at the time.

The 72-seat coalition will expand from 32 to 36 ministries after the initial six-month emergency government, making it the largest government in Israel's history.