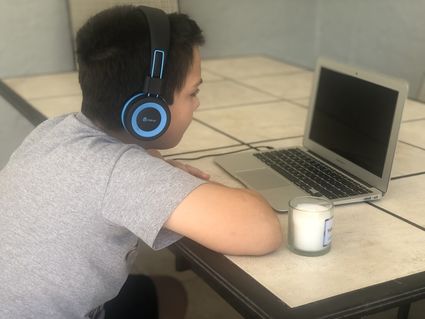 Head of School Alan Rusonik said, "It was important to us to deliver a developmentally appropriate program that was meaningful to our students."

The morning began with, "Eli, Eli," a song based on the poem written by Holocaust hero, Hannah Senesh.

Fourth grade parent, Heidi Zissman stated, "I appreciated that the program was not only meaningful for my son, but also left him with a message of hope and heroism, especially during these hard times."

Later on in the service, the assembly lit candles remotely in memory of the lives lost during the Holocaust.

"By lighting the candles, we ensure that the memory of those departed will remain with us forever," said, Judaics and Hebrew instructor Fanny Sernik.

The students participated in a special yizkor prayer and mourners' kaddish. As each line of the prayer was read, each one of the locations of massacre (such as concentration camps) was mentioned.

The program ended with a story of hope and heroism. The students listened to the book, "The Whispering Town," which was a story not only about the destruction but also about the brave souls, including Righteous Gentiles, who resisted the Nazis.