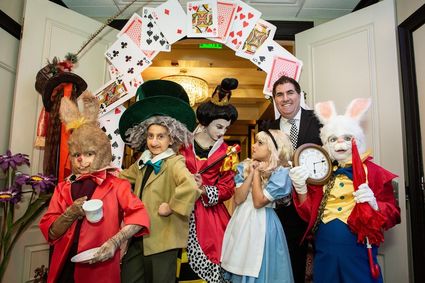 Cast members of JAO's "Alice in Wonderland" along with show director, Eric Levine.

Jewish Academy of Orlando originally planned to present Disney's "Alice in Wonderland" in May, however to ensure the safety of JAO's students and community, the full-scale musical production, starring the children of the Jewish Academy of Orlando, will be presented one night only on Thursday, Oct. 15, at 7 p.m. at the Wayne Densch Performing Arts Center in Sanford.

The audience will travel down the rabbit hole and join Alice as she meanders her way through Wonderland in this timeless tale of courage and self-discovery. Featuring fan-favorite songs such as "I'm Late," "The Unbirthday Song," and "Painting the Roses Red," this freshly updated version of the 1951 Disney animated classic is sure to delight audiences of all ages.

"We take tremendous pride in our theater program, and we put a lot of TLC into each show that we do," stated the show's director, Eric Levine.  "All the elements are there, from the professional sound and lighting to the costumes and sets. But a show is only as good as its performers, and our children (many as young as 7 years old) just shine on that stage."

Head of School Alan Rusonik added: "Our theater program, led by the very talented Eric Levine, is like no other elementary school production. Our students not only sing, dance, and act, they also develop important areas like self-confidence, public speaking, and teamwork. And it's all put together in a Broadway-style production that anyone in the community would enjoy."

Levine added, "The show must go on! The children have worked far too hard, having a rescheduled date, no matter how late it is or how many challenges it presents, will give the children something to look forward to and reward them for their hard work. In the words of Queen Elizabeth II: 'We should take comfort that while we may have more still to endure, better days will return. We will be with our friends again. We will be with our families again. We will meet again.'"

Tickets for "Alice in Wonderland" start at $15 each and are available by calling the box office at (407) 321-8111 or by visiting https://www.wdpac.com/theatredance. Tickets previously purchased for the May date will be honored for the show.