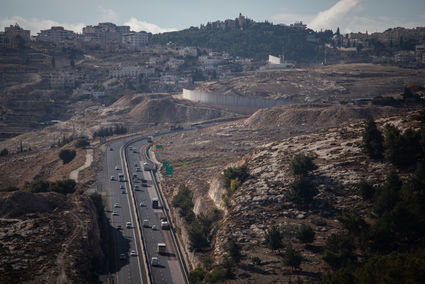 A view of Highway 1, the Ma'aleh Adumim-Jerusalem road, from the West Bank area known as E1, with Jerusalem's Mount Scopus seen on the horizon, Dec. 10, 2019.

(JNS)-A U.S. Staate Department spokesperson said on Monday that the United States remains ready to recognize Israel's annexation of territory in the West Bank, but expects Israel to continue negotiations with the Palestinians.

"As we have made consistently clear, we are prepared to recognize Israeli actions to extend Israeli sovereignty and the application of Israeli law to areas of the West Bank that the vision [U.S. President Donald Trump's "Peace to Prosperity" Mideast plan] foresees as being part of the State of Israel," the AFP quoted the spokesperson as saying.

The spokesperson added however that this support would be "in the context of the government of Israel agreeing to negotiate with the Palestinians along the lines set forth in President Trump's vision."

According to the terms of the unity agreement reached by Israeli Prime Minister Benjamin Netanyahu and his main rival, Benny Gantz of the Blue and White Party, the issue of extending Israeli sovereignty can be brought to the Knesset for a vote on July 1 at the earliest.

U.S. Secretary of State Mike Pompeo said last week that it was up to Israel whether or not to annex territory in Judea and Samaria, and the Jordan Valley, and that discussions on the issue are taking place through private channels with the Israeli government.

The Palestinians have refused to negotiate with the Trump administration.

The Arab League will convene an urgent virtual meeting this week to discuss Israel's annexation plans, according to the AFP.