From cabins to bungalows: Some Jewish overnight camps may become socially distanced family retreats this summer 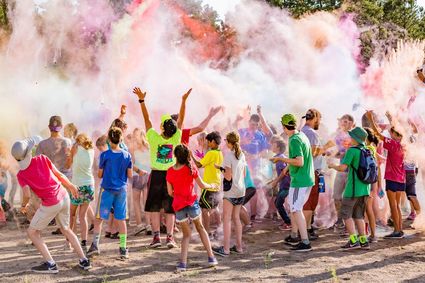 Like many camp activities, the 2017 Color War at JCC Ranch Camp in Colorado involved crowds of kids. This year, with its summer session canceled, the camp is becoming a family camp with socially distanced activities.

There's hiking, mountain biking, ropes courses and horseback riding, along with the traditional camp staples of team sports, arts and crafts, meals in a communal dining hall and hours of hanging out on acres upon acres of green space. Crucially, the kids enjoy independence from their parents-and the same for parents from their kids.

Like a growing group of Jewish camps across the country, Ranch Camp announced in recent days that it was canceling its entire summer because of the ongoing coronavirus pandemic. That marks a first in more than 60 years and leaves some 500 kids and their folks with two months of empty time.

But Ranch Camp has a Plan B for this summer, a different kind of camp, one without crowds of kids or activities that require physical contact. And parents will be coming along.

It'll be a family retreat, a place where nuclear families can rent cabins for days at a time and do socially distanced activities. This way, families can have a semblance of the camp experience and stay connected during an abnormal summer.

"We just wiped the slate and said OK, we have this private piece of property," camp director Noah Gallagher told the Jewish Telegraphic Agency. "Is there a world where we can bring people and give them some sense of connection to one another, and to nature, to Judaism in this environment without compromising their health, safety and well-being?"

Ranch Camp is perhaps the first Jewish camp in North America to pivot to family camp as a solution to COVID-mandated social distancing. But as one camp after another announces that summer 2020 is postponed, or not happening at all, the Jewish camping industry is wondering whether bringing in whole families-who have been isolating together for weeks-could allow for a camp experience without the prospect of mass contagion.

For some camps, it may be a way to recoup lost revenue.

"It allows camp to be beneficial for the whole family, and it's an opportunity for parents to experience camp," said Marissa Becker, a senior program manager at the Foundation for Jewish Camp. "What kinds of programs and activities can camp provide where families can stick together and still engage with others and stay socially distant?"

Even before the coronavirus crisis, Becker was working on programs for families so that camps could engage campers and their parents year-round. Now her team is adapting that work for this summer, designing a figurative "family camp in a box" that includes a suite of programs that camps can organize for families staying on their premises.

For example, Becker said, the initiative could include the outline for a family color war, a scavenger hunt based on Jewish values or ways to say Jewish prayers as a family.

Jewish camps across the country already run family camps when their regular summer programs aren't in session. The Jewish Federation of Los Angeles, for example, ran 16 family camps between September 2018 and May 2019, drawing 300 families. The camps were geared toward families with young children and aimed at providing immersive Jewish experiences while acting as a feeder for summer camps, according to a document on the federation's website.

Overall, according to a report published this year, there were 880 Jewish retreats of all kinds in 2018 in the United States. Some 100,000 people participate annually in Jewish retreats, according to Amy Sales, the lead author of the report, which was co-written with Nicole Samuel.

Sales said that today's family camps are a kind of parallel to the Jewish summer bungalow colonies in the Catskills generations ago, though with a much stronger emphasis on Jewish education. She said, however, that it will be hard to translate the feeling of a typical camp summer to a family camp with strict limits on social interaction.

"There's a whole list of instructions being given" to engage in social interaction right now, said Sales, who recently retired as associate director of Brandeis University's Cohen Center for Modern Jewish Studies. "Does any of that translate to the freewheeling setting of the camps, one that's supposed to be a safe space emotionally and in all kinds of ways? Can it be done without losing the spirit?"

Leora Kimmel Greene, who works with the Foundation for Jewish Camp but spoke to JTA in a personal capacity, knows it's not the same as regular camp, but said it could be close enough to give parents and kids a break from the current era of social isolation.

At Ranch Camp, which is operated by JCC Denver, restrictions on behavior will be significant. The family camps will take place in six sessions of five days each. The camp has a total of 18 cabins and bungalows, and during the sessions, each will house only one family. Food will be delivered to their doorsteps, and they will eat in or right outside their cabins. Twenty staff members, primarily employees who would have worked during the regular summer session, will isolate at the camp for two weeks together before the program starts.

There will be a full schedule of activities, divided into groups of no more than 10 people, or roughly two families. Within each activity, the families will be socially distanced. So, for example, two families might do arts and crafts at separate tables 6 feet apart from each other.

Contact sports like soccer and basketball are out, though Gallagher said families could do line dancing or ride on exercise bikes 6 feet apart. They could even do a ropes course, he said, with the help of a counselor and everyone wearing plastic gloves.

"A parent would have to put their kid in the harness," Gallagher said. "Make sure the helmet works, and do all the things that one of those people could do if they could be right with the kid."

Tuition for the family camp starts at $1,400. Gallagher said the goal financially is to break even, adding that Ranch Camp is hoping to recoup some lost revenue from the canceled summer session through donations from philanthropists and camp families. Registration opens Friday, and based on the camp's outreach so far, Gallagher said, "We are perfectly confident that we're going to fill it."

Whether the family camp actually happens is another question.

If there is no reliable and widespread way to test for COVID-19 by the time the camp opens, Gallagher said, the idea might have to be nixed. And if one of the counselors is found to have the disease during the staff's two-week quarantine, the camp may have to be postponed.

"We will be expecting a lot from our families to abide by these things," he said. "We will have to be very rigid about our enforcement and adherence."

Even with all those limits, Gallagher still thinks the family camp will be worth it.

"This sucks for all of us, but if there's any chance of offering some sense of connection to Judaism and connection to Ranch Camp... we've got to do it," he said. "But only, only, only if we know we are keeping our community safe in the process."