Teaching the whole child during COVID-19 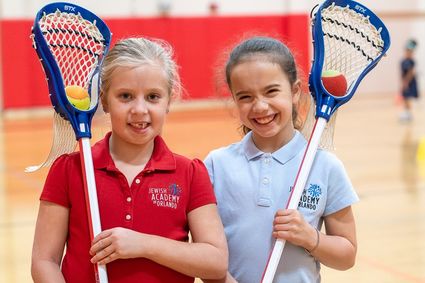 JAO students learn how to apply the character strength of prudence to the game of lacrosse.

Jewish Academy of Orlando (JAO) continues to promote positive education remotely as part of the school's core value of teaching to the whole child.

Similarly to when the students were physically in school, each week, a new character strength is introduced during JAO's Monday Morning Minyan. Teachers choose how to further explore or reinforce the character strength in his/her class throughout the week. Each Wednesday, on the WJAO newscast, there is a "We are Strong Wednesday" feature that includes a news story related to that week's character strength. Also, at the end of the each week the remote Shabbat assemblies finish with reference to the strength.

When JAO transitioned into remote learning, the teachers didn't miss a beat in supporting their current curriculum, including positive education. Videos continue to be used to assist in explaining what the character strengths mean. From there, class discussions and engaging activities such as role playing, writing journals and art are used as ways of assessing student's understanding.

"For example, in PE, students began their lesson with a video explaining the character strength, prudence. Later they learned how to apply prudence in the game of lacrosse," said interim director of Academics Amy Polacek. "In fourth grade, students in their Google classroom, participated in a game called, 'Would you rather?' where they had had to explain the rationale for each choice that was presented."

Polacek added, "We are using positive education in our goal to educate the whole child, something that acknowledges and aims to support and nurture the inner world of the student-their thoughts, emotions, feelings, not only their more rational academic performance based on grades and scores. It's a more holistic approach that recognizes the student as a person and not as a statistic."

School counselor Danielle Glover added, "Now that we are in the midst COVID-19 crisis, and many things we took for granted look uncertain, having almost a full academic year of character strengths discussion under our belts equips our students, teachers and staff with the ability to cope with this new reality from a more positive, strengths-based approach."

Head of School Alan Rusonik added, "Thanks to positive education, our students know that they have many different strengths to turn to, tapping into character strengths such as love, hope, gratitude, bravery and more ultimately help our community face the future with more resilience and positivity."