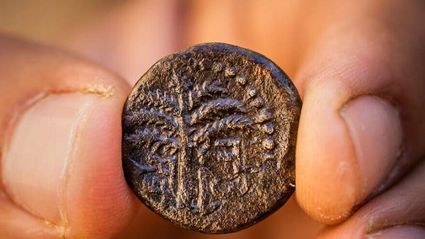 A recently discovered coin from the Bar Kochba era (around 132 C.E.) inscribed with the word "Jerusalem."

(JNS) - In honor of Lag B'Omer, a Jewish holiday commemorating the life of anti-Roman Torah sage Rabbi Shimon bar Yochai, the Israel Antiquities Authority on Monday revealed the discovery of a rare bronze coin from the period of the Bar Kochba revolt (circa 132 C.E.).

The coin was uncovered during excavations in the William Davidson Archaeological Park between the Temple Mount and the City of David in Jerusalem. The excavations are conducted by the IAA and funded by the Ir David Foundation/City of David, which operates the site.

The IAA says that it is the only coin from the period found in...