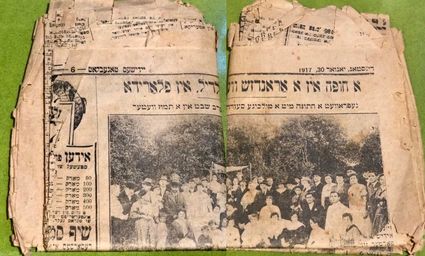 The front page of the Forverts showing the Levy wedding, 1917.

Like many of us during this pandemic confinement, Stella Levy of Sacramento, California, has spent time cleaning house and going through long forgotten boxes of papers and photos. Little did she know she would discover some priceless family documents and Orlando history. Upon finding these treasures Levy contacted her cousin Roz Fuchs to share what she had. Fuchs, who chaired the Kehillah exhibit, which was on display two years ago at the Orange County Regional History Center, was excited to add photos of these items to the Orlando Jewish community archive data base. 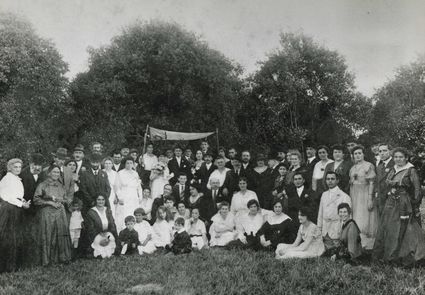 The wedding photo of Rose Gleibman and Aaron Harry Levy, the first Jewish couple married in Orlando. This photo is in "Kehillah: A History of Jewish Life in Greater Orlando."

In 1917, Stella Levy's grandparents, Rose Gleibman and Aaron Harry Levy, were the first Jewish couple to be married in Orlando. Their wedding photo, taken on the groom's family farm with the entire Jewish community at that time, was in the Kehillah exhibit, and also appeared on the cover of the exhibit catalog. The exhibit did not include the invitation to the wedding or the page from The Jewish Daily Forverts, now known as the Forward, that included an article titled "A wedding in Gan Eden," along with the wedding photo.

No one knows how this 1917 Orlando wedding photograph made its way to the Forverts, but it is assumed the photographer was responsible. Fearing the old and fragile paper would crumble if opened, these images still help us see how there were attempts to connect the Jews of early Orlando to the national Jewish community.

The entire Kehillah exhibit can be viewed online at orlandojewishhistory.com.