Step back in time at Kutsher's Catskill resort 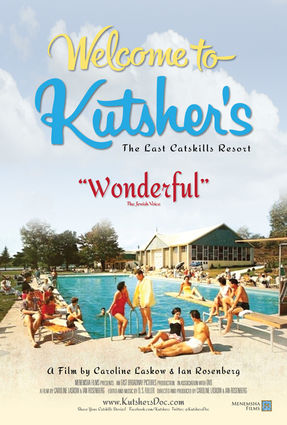 Want to escape to a past Jewish lifetime where families ventured to a resort in the Catskills during the hot summer months? “Welcome to Kutsher’s: The Last Catskills Resort,” a film documentary by Caroline Laskow and Ian Rosenberg, will satisfy that desire.

Kutsher’s Country Club was the last surviving Jewish resort in the Catskills. One of the legendary Borscht Belt hotels during its heyday, Kutsher’s was family-owned and operated for over 100 years. Anyone who watched Amazon Prime’s Season 2 of “The Marvelous Mrs. Mazel” got an eyeful of this resort life. This award-winning documentary captures a last glimpse of a lost world as it disappears before our eyes.

The Catskills resorts were not only a Jewish refuge and family vacation paradise, they also gave birth to American stand-up comedy, an NBA All-Star tradition, and all-inclusive resorts. Entertainment included an abundance of hearty kosher feasts and the non-stop whirl of recreational activities.

As the Catskills declined, this film provides unprecedented eye-witness documentation of Kutsher’s from its 100th anniversary season through the next seven years until the hotel was sold and demolished in 2014. The story of Kutsher’s is uniquely American, unexpectedly moving and a vital chapter of the modern Jewish experience.

The film can be viewed on Amazon, iTunes, GooglePlay and more.